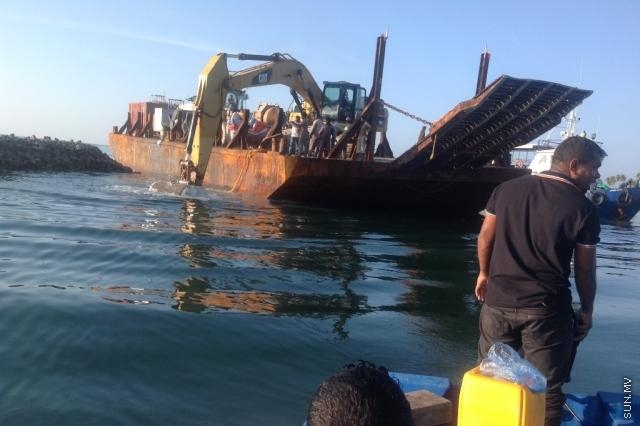 The Maldives Transport and Construction Company (MTCC) has begun harbor construction project in the island of Gemanafushi in Gaafu Alifu Atoll.

President of Gemanafushi Council Asim Mohammed told Sun Online today that work on the project began yesterday afternoon. He also said that MTCC gave a duration of 10 months to complete the project.

The project would reconstruct a harbor 1000 feet in length and 300 feet in breadth in the island, where the old harbor, insufficient for use now, is in ruin.

Council President Asim said that the project is being conducted “the way the people want it to be conducted”. He also said that the people were there with “dhekun” to welcome the team of MTCC yesterday upon the latter’s arrival in the island. “Dhekun” is a special traditional meal containing special dishes, prepared by community members for people who do a special work for community development.

Asim also expressed gratitude on behalf of the people to President Dr. Mohammed Waheed Hassan Manik for starting the project soon after he made a promise to the effect, during his recent visit to the island.

“When President Waheed visited this island a while ago, he promised that a new harbor would be constructed here. Within a short period of time, the work of what would be one the best harbors in the Maldives has begun here. I thank President Dr. Waheed in my own name, as well as on behalf of the people of this island”, said Asim.

Gemanafushi, one of the 9 inhabited islands in Gaafu Alifu Atoll, the biggest atoll in the Maldives and one of the three south atolls, is a fishing island, and the people have complained for years about a better harbor.

Petition to Majlis demands declaration to deny legitimacy of government