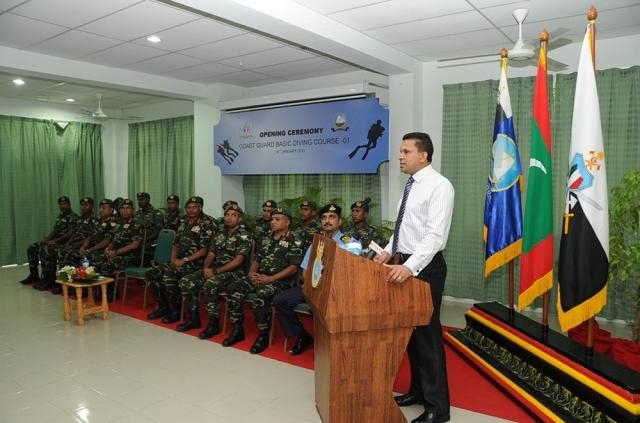 Maldives National Defence Force has started the “MNDF Cost Guard Basic Diving Course” participated by international military personnel. The course is the first of its kind to be held in the country.

Speaking at the inauguration ceremony held in the MNDF Training Centre based in Girifushi Island, Defence Minister Colonel (Rtd) Mohamed Nazim said that the course is the first of such courses organized by the MNDF and participated by foreign military personnel. He noted that the soldiers in MNDF today are educated in diverse fields of expertise.

Speaking to the press regarding the course, Lieutenant Mohamed Shareef of the MNDF Coast Guard said that this diving course was opened for participation from international parties and will continue for a period of two months. He said that the participants will learn how to appropriately handle situations they might face under water.

“One participant each from India, Nepal and Lanka forces will take part in the course, while 12 personnel from MNDF will also join,” said Shareef.