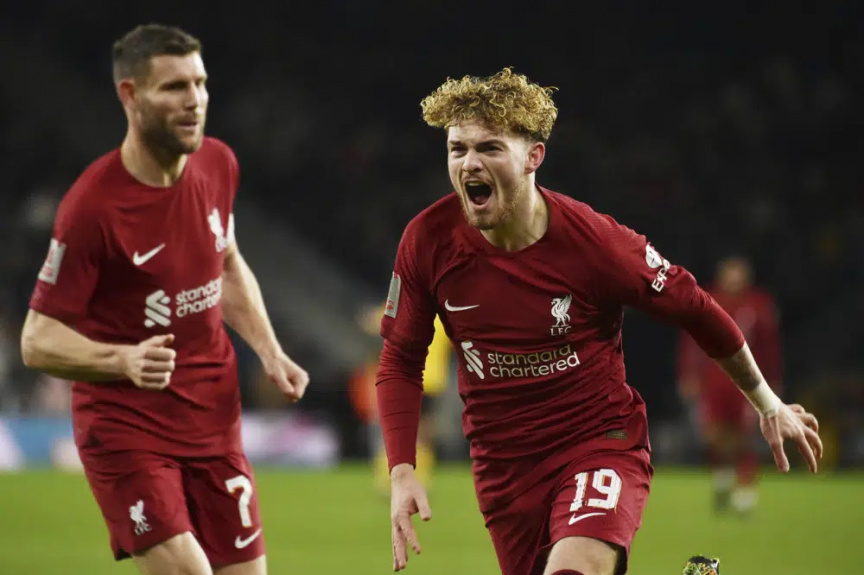 Liverpool kept alive its FA Cup title defense Tuesday and earned an immediate chance to avenge one of its most humiliating Premier League losses.

A 1-0 win at Wolverhampton in a third-round replay set up a trip in the last 32 to Brighton, which routed Liverpool 3-0 on Saturday in a defeat that Reds manager Jurgen Klopp ranked as the worst in his 22-year coaching career.

Harvey Elliott scored the winner in the 13th minute, running from inside his own half and unleashing a shot from 30 meters that sailed over Wolves goalkeeper José Sá and into the middle of the net.

Klopp wanted his team to get “back to basics” after the humbling loss at Brighton three days earlier and fielded a weakened lineup, leaving out stars like Mohamed Salah, Alisson Becker and Andrew Robertson.

Liverpool was largely untroubled at Molineux as Wolves became the ninth Premier League team to get eliminated. Everton, Bournemouth, Nottingham Forest, Crystal Palace, Brentford, Newcastle, Chelsea and Aston Villa were knocked out in their first match in the famous old competition this season.

The FA Cup likely represents Liverpool’s only chance of a domestic trophy this season, with Klopp’s team having exited the League Cup and plunged to ninth place in the league — 19 points off leader Arsenal.

It was a first clean sheet in an away match in a domestic competition since September and came against the lowest-scoring team in the Premier League, with Wolves having only netted 12 goals in 19 league games this season.

“It feels like ages ago we had a feeling of winning and playing well,” Klopp said. “We had to fight hard at the end which we controlled for long periods. It is great and the reaction we wanted to see.”

Brighton will host Liverpool in the fourth round on Jan. 29.

Fifth-tier Chesterfield was looking to become the second non-league team, after Wrexham and its Hollywood owners, to reach the fourth round.

However, there was no shock at The Hawthorns as second-tier West Bromwich Albion easily won 4-0.

Another non-league team, Boreham Wood, was scheduled to play but its replay against third-tier Accrington Stanley was postponed because of a frozen pitch. It has been rearranged for Jan. 24.

Leeds hosts second-tier Cardiff in a third-round replay on Wednesday.

Man City knocks out Arsenal 1-0 in the FA Cup