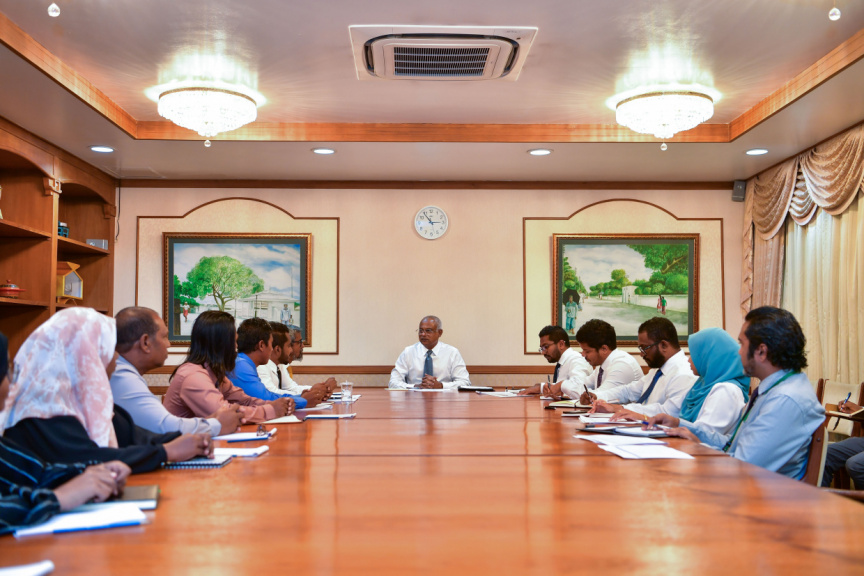 President Ibrahim Mohamed Solih on Sunday stated that funds had been earmarked in the state budget for 2023 to address most of the concerns raised by the council members.

He said this during the meeting held with Hdh. Kurin’bi’s Island Council and Women's Development Committee (WDC) members at the President’s Office on Sunday.

In the meeting, the president discussed the administration's developmental plans for the island, centring around the ongoing projects and the most pertinent needs of the people.

The council members shared with the President their 100-year developmental strategy and land-use plans for the island.

Additionally, numerous topics were discussed at the meeting including challenges related to harbour use, space constraints at the Secretariat of the Council, and the lack of a dedicated swimming area.

Speaking at the meeting, the President said that funds had been allocated in the state budget for 2023 to address most of the concerns raised by the council members.

Furthermore, he highlighted plans to develop a new administrative building and football grounds and assured discussions with relevant stakeholders to address the need for harbour expansion. He added that the dedicated swimming area could be developed as part of harbour expansion work.

The council members noted that the administration was behind most of the developmental projects carried out on the island. However, they also said that the meeting with the President had renewed their hopes of addressing the concerns of the island's community.