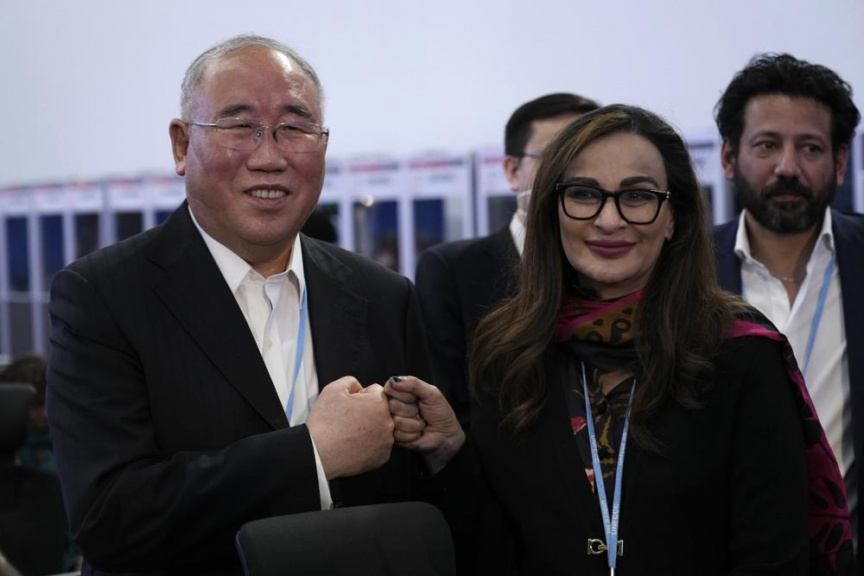 SHARM EL-SHEIKH, Egypt (AP) — Negotiators early Sunday approved a historic deal that would create a fund for compensating poor nations that are victims of extreme weather worsened by rich countries’ carbon pollution, but an overall larger agreement still was up in the air because of a fight over emission reduction efforts.

After the decision on the fund was approved, talks were put on hold for 30 minutes so delegates could read texts of other measures they were to vote on.

The decision establishes a fund for what negotiators call loss and damage. It is a big win for poorer nations which have long called for cash — sometimes viewed as reparations — because they are often the victims of climate-worsened floods, droughts, heat waves, famines and storms despite having contributed little to the pollution that heats up the globe.

It is also long been called an issue of climate justice.

“This is how a 30-year-old journey of ours has finally, we hope, found fruition today,” said Pakistan Climate Minister Sherry Rehman, who often took the lead for the world’s poorest nations. One-third of her nation was submerged this summer by a devastating flood and she and other officials used the motto: “What went on in Pakistan will not stay in Pakistan.”

Maldives Environment Minister Aminath Shauna told The AP Saturday “that means for countries like ours we will have the mosaic of solutions that we have been advocating for.”

Outside experts hailed the decision as historic.

“This loss and damage fund will be a lifeline for poor families whose houses are destroyed, farmers whose fields are ruined, and islanders forced from their ancestral homes,” said Ani Dasgupta, president of the environmental think tank World Resources Institute, minutes after the early morning approval. “This positive outcome from COP27 is an important step toward rebuilding trust with vulnerable countries.”

It’s a reflection of what can be done when the poorest nations remain unified, said Alex Scott, a climate diplomacy expert at the think tank E3G.

“I think this is huge to have governments coming together to actually work out at least the first step of ... how to deal with the issue of loss and damage,” Scott said. But like all climate financials, it is one thing to create a fund, it’s another to get money flowing in and out, she said. The developed world still has not kept its 2009 pledge to spend $100 billion a year in other climate aid — designed to help poor nations develop green energy and adapt to future warming.

The agreement “offers hope to the vulnerable people that they will get help to recover from climate disasters and rebuild their lives,” said Harjeet Singh, head of global political strategy at Climate Action Network International.

“Loss and damage is a way of both recognizing past harm and compensating for that past harm,” said Dartmouth climate scientist Justin Mankin, who calculated dollar amounts for each country’s warming. “These harms are scientifically identifiable.”

“In many ways, we’re talking about reparations,” said University of Maryland environmental health and justice professor Sacoby Wilson. “It’s an appropriate term to use,” he said, because the rich northern countries got the benefits of fossil fuels, while the poorer global south gets the damage in floods, droughts, climate refugees and hunger.

The Egyptian presidency, which had been under criticism by all sides, proposed a new loss and damage deal Saturday afternoon and within a couple of hours an agreement was struck, but Norway’s negotiator said it was not so much the Egyptians but countries working together.

Germany climate envoy Jennifer Morgan and Chilean Environment Minister Maisa Rojas, who shepherded the deal onto the agenda and to the finish line, hugged each other after passage, posed for a photo and said “yeah, we made it!”

According to the agreement, the fund would initially draw on contributions from developed countries and other private and public sources such as international financial institutions. While major emerging economies such as China would not initially be required to contribute, that option remains on the table and will be negotiated over the coming years. This is a key demand by the European Union and the United States, who argue that China and other large polluters currently classified as developing countries have the financial clout and responsibility to pay their way.

The fund would be largely aimed at the most vulnerable nations, though there would be room for middle-income countries that are severely battered by climate disasters to get aid.

Going into the final session, battle lines were drawn over India’s request to change last year’s agreement that called for a phase-down of “unabated coal” to include a phase-down of oil and natural gas, two other fossil fuels that produce heat-trapping gases. While European nations and others keep pushing for that language, Saudi Arabia, Russia and Nigeria have been insistent on keeping it out.

“We are extremely on overtime. There were some good spirits earlier today. I think more people are more frustrated about the lack of progress,” Norwegian climate change minister Espen Barth Eide told The Associated Press. He said it came down to getting tougher on fossil fuel emissions and retaining the goal of limiting warming to 1.5 degrees Celsius (2.7 degrees Fahrenheit) since pre-industrial times as was agreed in last year’s climate summit in Glasgow.

“Some of us are trying to say that we actually have to keep global warming under 1.5 degrees and that requires some action. We have to reduce our use of fossil fuels, for instance,” Eide said. “But there’s a very strong fossil fuel lobby ... trying to block any language that we produce. So that’s quite clear.”

There was strong concern among both developed and developing countries about proposals for cutting greenhouse gas emissions, known as mitigation. Officials said the language put forward by Egypt backtracked on some of the commitments made at last year’s U.N. climate conference in Glasgow aimed at keeping alive the target of limiting global warming to 1.5 degrees Celsius (2.7 Fahrenheit) since pre-industrial times. The world has already warmed 1.1 degrees Celsius (2 degrees Fahrenheit) since the mid-19th century.

Some of the Egyptian languages on mitigation seemingly reverted to the 2015 Paris agreement, which was before scientists knew how crucial the 1.5-degree threshold was and heavily mentioned a weaker 2-degree Celsius (3.6 degrees Fahrenheit) goal, which is why scientists and Europeans are afraid of backtracking, said climate scientist Maarten van Aalst of the Red Cross Red Crescent Climate Centre.

Ireland’s Minister for the Environment Eamon Ryan said: “We need to get a deal on 1.5 degrees. We need strong wording on mitigation and that’s what we’re going to push.”