Bodies of 2 girls found in Syria camp housing IS families 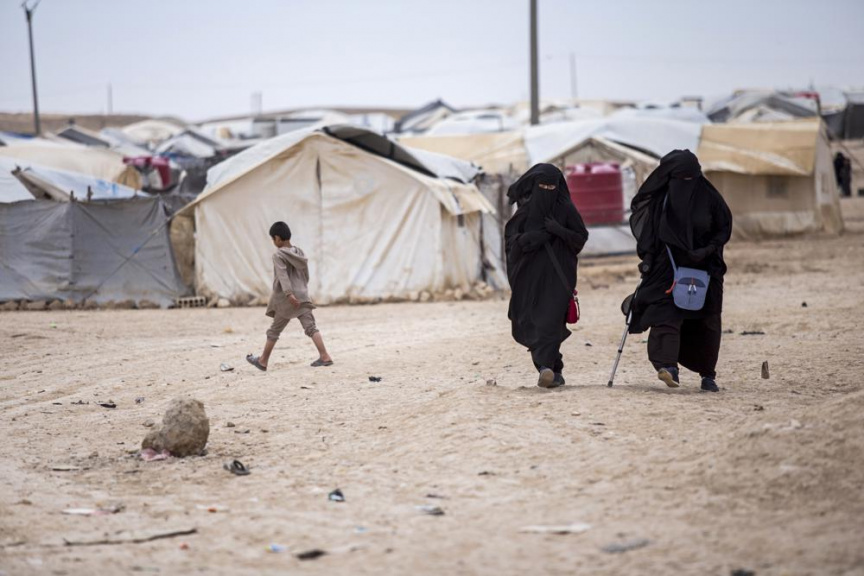 FILE - Women walk in the al-Hol camp that houses some 60,000 refugees, including families and supporters of the Islamic State group, many of them foreign nationals, in Hasakeh province, Syria, May 1, 2021. (AP Photo/Baderkhan Ahmad, File)

BEIRUT (AP) — The beheaded bodies of two Egyptian girls were found Tuesday in a sprawling camp in northeastern Syria housing tens of thousands of women and children linked to the Islamic State group, an opposition war monitor and local officials said.

The bodies of the girls were found in the sewage system of the camp days after they went missing, according to the Syrian Observatory for Human Rights. The group said the girls had been beheaded. It was first such crime in weeks in the facility.

An official at the camp who requested anonymity for fear of reprisals said the girls were aged 11 and 13.

Such grisly crimes in the camp are usually committed by members of IS sleeper cells, especially against women who resist abiding by the group’s extreme ideology. The Observatory, Ali and the official at the camp all blamed IS.

“This is another extremely sad reminder of how bad the conditions are. We continue with our pleas for all parties to do what they can to improve the situation there,” said Farhan Haq, U.N. deputy spokesman, when asked about the incident. “And of course, this needs to be thoroughly condemned and thoroughly investigated.”

The killings are the first since U.S.-backed Syrian fighters concluded a 24-day sweep at al-Hol in mid-September, during which dozens of extremists were detained and weapons were confiscated in the operation. The operation came after IS sleeper cells committed crimes inside the camp.

Following the rise of IS in 2014 and its declaration of a co-called Islamic caliphate in parts of Syria and Iraq, thousands of men and women came from around the world to join the extremist group. IS lost the last sliver of land it once controlled in east Syria in March 2019, but since then its sleeper cells have been blamed for deadly attacks in Syria and Iraq.

“We are horrified to hear reports that two children have been killed in al-Hol camp (in) Syria,” said Tanya Evans, Country Director for the International Rescue Committee in Syria. She added that the latest incident involving the deaths of children in the camp highlights the urgent need for longer-term solutions for children in al-Hol.

Some 50,000 Syrians and Iraqis are crowded into tents in the fenced-in camp. Nearly 20,000 of them are children; most of the rest are women, the wives and widows of IS fighters.

Earlier this month, Doctors Without Borders said the camp is witnessing pervasive violence, exploitation and lawlessness. The group said that countries with citizens held in al-Hol have failed to take responsibility for protecting them.

The two teenage girls were found in a separated, heavily guarded section of the camp known as the annex, where an additional 2,000 women from 57 countries — considered the most die-hard IS supporters — along with their roughly 8,000 children are housed, the Observatory said.

The Observatory that tracks Syria’s 11-year conflict has recorded 28 crimes since the beginning of the year at al-Hol in which 30 people were killed.

US kills IS group leader in Syria in drone strike