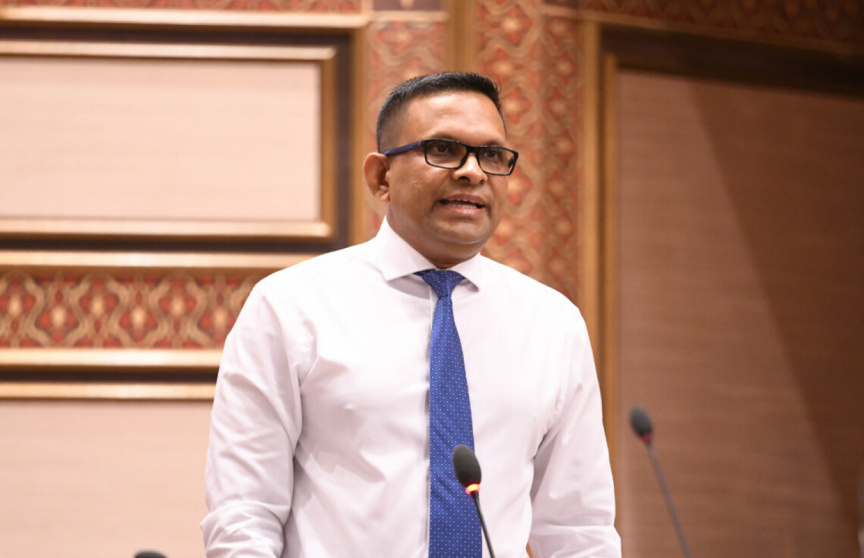 Parliament, on Tuesday, has dismissed the resolution filed by the leader of Maldives National Party (MNP), Dhangethi MP Colonel (Retired) Mohamed Nazim calling for a parliamentary inquiry to ascertain the legitimacy of the shift in the government’s policy in the territorial dispute with Mauritius, and to assess the possible losses and benefits from the decision.

During verbal proceedings in the case in late October, Attorney General Ibrahim Riffath said Maldives had decided to vote in favor of the Chagos decolonization resolution in the UN General Assembly this year, and that the Maldivian president had informed his decision in a letter to the Mauritius prime minister.

They also stressed that Maldives’ interests were properly defended in accordance with international conventions and legal principles and decisions before the ITLOS.

Presenting his resolution in an earlier sitting, Nazim

said he finds the shift in a stand Maldives has stood by since 2010 suspicious.

Nazim said that Article 3 of the Constitution declares Maldives’ boundaries, and any changes to the limits of the boundary require a majority vote of at least two-thirds of the Parliament.

He also said that instead of informing the Maldivian people of the change in Maldives’ policy in the dispute, the government instead informed the Mauritius prime minister, without disclosing the reason for the change or the details of the discussions that led to the decision.

He said the letter from the Maldivian president to Mauritius prime minister proves Maldives and Mauritius have reached an international convention.

Nazim referred to Article 93 (a) of the Constitution, which requires parliamentary approval for all international conventions Maldives is party to.

He said the government failed to perform its legal duty.

Nazim said the dispute over Chagos isn’t linked to foreign policy alone, but is also a legal and economic issue. He said there is no evidence the government engaged in discussion over the issue from a holistic perspective.

He accused the AGO of using foreign policy as a shield against questions from reporters over the issue.

Nazim also said that given rare-earth elements are found most often underwater, the loss of even a small part of the ocean is a loss that will affect generations to come.

He said that it also conflicts with the third target of Maldives’ foreign policy, listed as increasing the economic prosperity of Maldives.

Nazim said the disputed area is rich in fish, and that the loss of any area of the ocean will be a significant loss to Maldives’ fisheries sector.

He asked for the selection of a special committee to identify the reasons surrounding the shift in government’s policy in the dispute over Chagos, and to ascertain the decision wasn’t influenced by political pressure or money.

The committee must ascertain the shift in policy was made within the bounds of the law, assess the potential losses and benefits from the decision, and inform it to the Maldivian people, he said.

A statement by the parliament regarding the issue read that they have yet to be informed of the letter send by President Solih to the prime minister of Mauritius, and the change in stance on recognizing the sovereignty of Mauritius over Chagos.

Parliament said that the change in stance was brought to their attention through media reports. They also said that two letters were sent to the AGO by the relevant committees of the parliament back in February, requesting a meeting to brief them on the updates of the case.

It was noted by the parliament that AGO had replied to both letters, providing information regarding the latest updates on the ITLOS case.