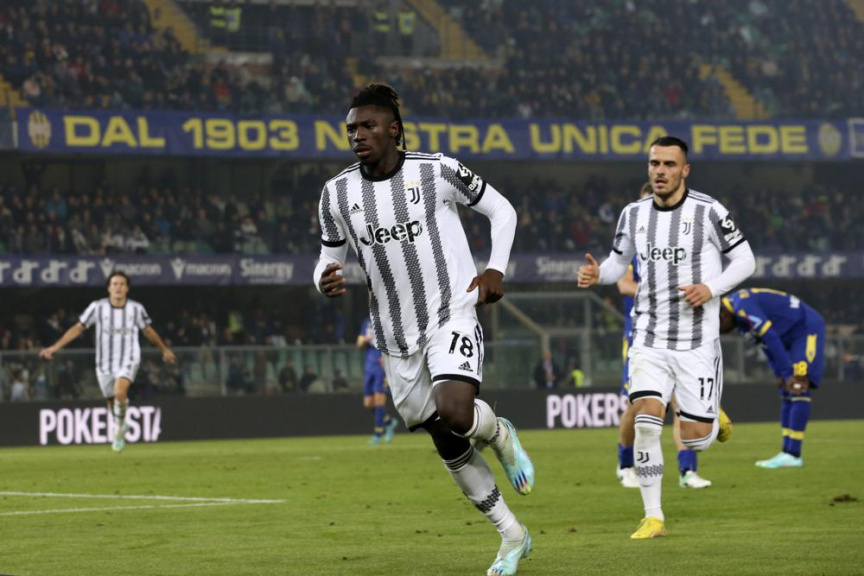 Juventus' Moise Kean, left, celebrates after scoring the first goal of the game during the Italian Serie A soccer match between Hellas Verona and Juventus at the Marcantonio Bentegodi Stadium in Verona, Italy, Thursday, Nov. 10, 2022. (Paola Garbuio/LaPresse via AP)

MILAN (AP) — Despite a bad start to the season, Juventus could end the year in the top four in Serie A.

Moise Kean’s goal was enough for Juventus to win 1-0 at bottom club Hellas Verona on Thursday to move fourth in the league standings.

Juventus is just two points below AC Milan and Lazio — after the latter beat Monza 1-0 thanks to teenage goalscorer Luka Romero — but 10 behind Serie A leader Napoli.

Inter Milan and Atalanta were a point below Juventus, with Roma a point further back.

Juventus hosts Lazio at the weekend in the final round before Serie A stops for the World Cup and the traditional winter break.

It was Juve’s fifth straight league victory after winning just three of its opening nine Serie A matches. Massimiliano Allegri’s side was also eliminated from the Champions League after the group stage.

“We must be satisfied with what we have done in these last five games, not only for the results obtained, but for how the team has grown,” Allegri said. “Now we’re in a good position in the table, we can be optimistic.

“Now we’ll think about Lazio. We have one last effort to give on Sunday, we shouldn’t look at the table now, it should be looked at in February when we will see in what condition we’re at.”

Despite Verona’s poor form, Juventus struggled at the start and it was the home side which went closest to taking the lead, with the Bianconeri failing to create any real scoring opportunities.

However, Juventus finally broke the deadlock on the hour mark when Adrien Rabiot threaded a ball through to Kean and his shot was deflected in off Verona defender Paweł Dawidowicz.

Verona thought it had been given a chance to snatch a late equalizer when it was awarded a penalty for contact between Juventus defender Leonardo Bonucci and home forward Simone Verdi, seven minutes from time. But referee Marco Di Bello revoked his decision after reviewing the incident on the pitchside monitor.

Romero scored what was to prove the winner against Monza in the 69th minute, after coming on as a halftime substitute. He reacted quickest to fire the rebound into the roof of the net after Monza goalkeeper Michele Di Gregorio spilled Pedro’s effort.

Romero celebrated after the match by holding the club eagle as he walked round the field with the rest of the squad.

“I am very happy because it’s a great feeling to score here, in front of our fans,” he said. “It’s something I could never have imagined how it would be.

“It’s the best birthday present in the world.”

The midfielder had only previously played 81 minutes in Serie A since joining Lazio last year.

Romero was born in Mexico and raised in Spain but represents Argentina at youth international level.