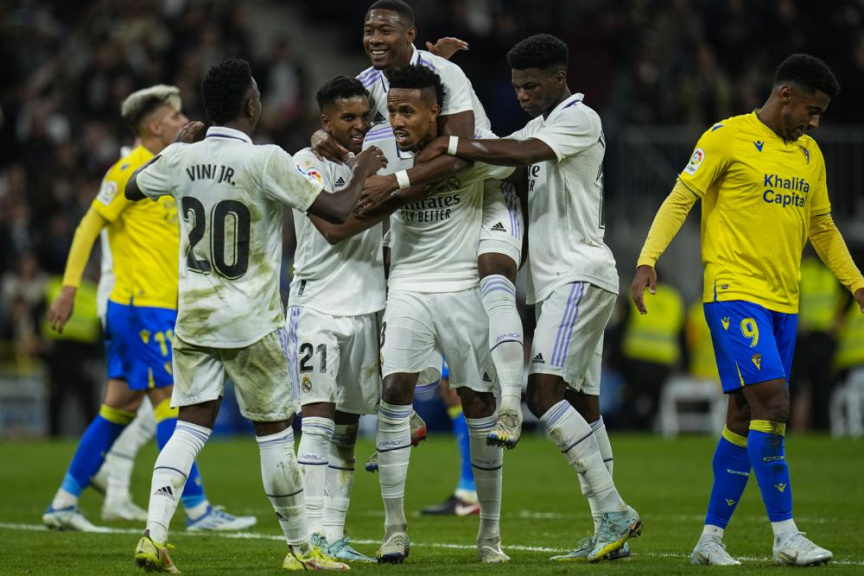 MADRID (AP) — Real Madrid got back to winning — and moved closer to Barcelona going into the World Cup break.

Madrid halted its two-match winless streak in the Spanish league by defeating relegation-threatened Cádiz 2-1 on Thursday to cut Barcelona’s lead to two points going into the World Cup stoppage.

Éder Militão and Toni Kroos scored a goal in each half for Madrid.

“These are well-deserved three points to finish the first part of the season well,” Madrid coach Carlo Ancelotti said.

Madrid was coming off its first league loss of the season — a 3-2 defeat at Rayo Vallecano on Monday. It had drawn with Girona at home in the previous round. Madrid’s only other loss of the season came at Leipzig in the group stage of the Champions League last month.

It was a heated match early on at the Santiago Bernabéu Stadium, with Vinícius Júnior and Rodrygo getting into altercations with Cádiz’s players. Vinícius was especially upset after what appeared to be a punch by Cádiz defender Fali away from the ball in the first half.

“We can’t get into these altercations because that’s what the other team wants us to do,” Kroos said.

Militão opened the scoring with a header after a well-placed cross by Kroos in the 40th, and the German midfielder added to Madrid’s lead with a superb one-timer from the outside the area in the 70th.

“We were in control and created many scoring chances,” Kroos said. “It was a good match.”

Lucas Perez moved Cádiz closer with a shot from inside the area in the 81st, and the visitors nearly equalized with a stoppage-time header by Pacha Espino that went over the crossbar.

Sevilla and last-place Elche are the other two teams in the relegation zone going into the World Cup break. At the top, Real Sociedad was third, Athletic Bilbao fourth and Atlético Madrid fifth.

Valencia hadn’t won since a match at Osasuna last month.

Betis, which dropped to sixth, lost defender Edgar González to a second yellow card in the 61st.

Betis had two players sent off in the 1-1 draw against rival Sevilla in the previous round.

Manuel Pellegrini’s team got off to a good start but has only one win in its last five league matches.

Rayo Vallecano followed its win against Madrid with a 0-0 draw with Celta Vigo at home, staying in eighth place. It was seeking its fourth consecutive victory.

Celta, winless in seven matches, was just outside the relegation zone, ahead of Sevilla.