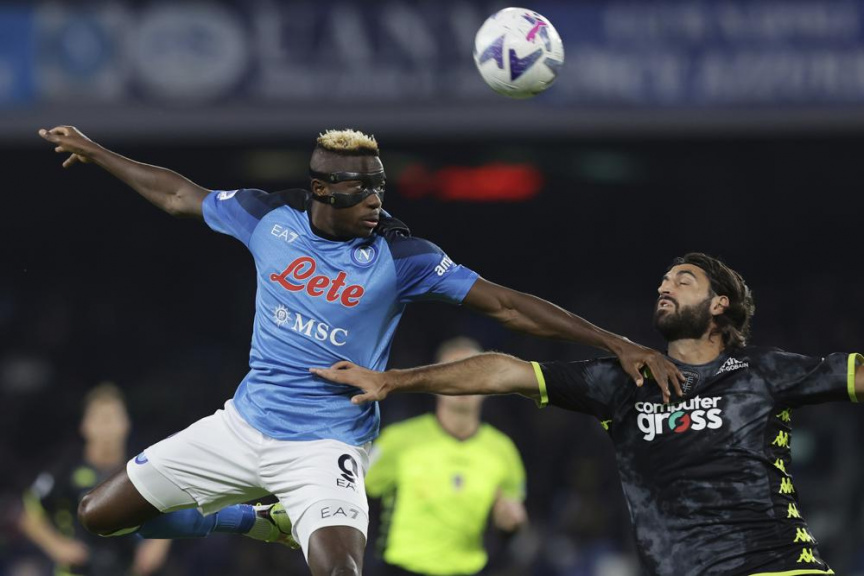 Napoli's Victor Osimhen, left, and Empoli's Sebastiano Luperto battle for the ball during the Italian Serie A soccer match between Napoli and Empoli at the Diego Armando Maradona stadium in Naples, Italy, Tuesday, Nov. 8, 2022. (Alessandro Garofalo/LaPresse via AP)

ROME (AP) — Even without its most exciting player, Napoli is still finding ways to win.

With dribbling wizard Khvicha Kvaratskhelia out with back pain, Hirving Lozano scored one goal and set up another as the Serie A leader beat visiting Empoli 2-0 on Tuesday to extend its winning streak to 10 matches in the Italian league.

The victory moved Napoli eight points clear of defending champion AC Milan, which was held to a 0-0 draw at relegation-threatened Cremonese.

It also ended a three-match losing streak against Empoli in Serie A for Napoli.

Kvaratskhelia, the Georgia winger known as “Kvara,” also missed a win over then second-place Atalanta this past weekend, after scoring six goals and assisting on five more in the opening 12 rounds.

Midway through the second half at the Stadio Diego Armando Maradona, Osimhen earned a penalty and Lozano converted from the spot.

Lozano then drew a foul from Empoli defender Sebastiano Luperto, who picked up his second yellow card — leaving Empoli with 10 men.

Lozano — preparing to play for Mexico at the World Cup — was again involved with strong work down the right flank, muscling his way past defenders to provide a cross that Piotr Zieliński redirected in with one touch in the 88th.

With Zieliński having come on early in the second half, it marked Napoli’s ninth goal off the bench this season.

The southern club is chasing its first Serie A title since Maradona led the Partenopei to its only Italian league championships in 1987 and 1990.

Milan had Olivier Giroud and Theo Hernandez suspended and had trouble finding the target with Cremonese goalkeeper Marco Carnesecchi swatting away shot after shot from the Rossoneri.

Divock Origi had a potential goal for Milan waved off by VAR for offside.

Milan has already failed to win four of its seven away games in Serie A this season after winning all but five of 19 away matches en route to the title last term.

Also, Udinese and Spezia drew 1-1, with both clubs extending their winless streaks in the league to seven matches.