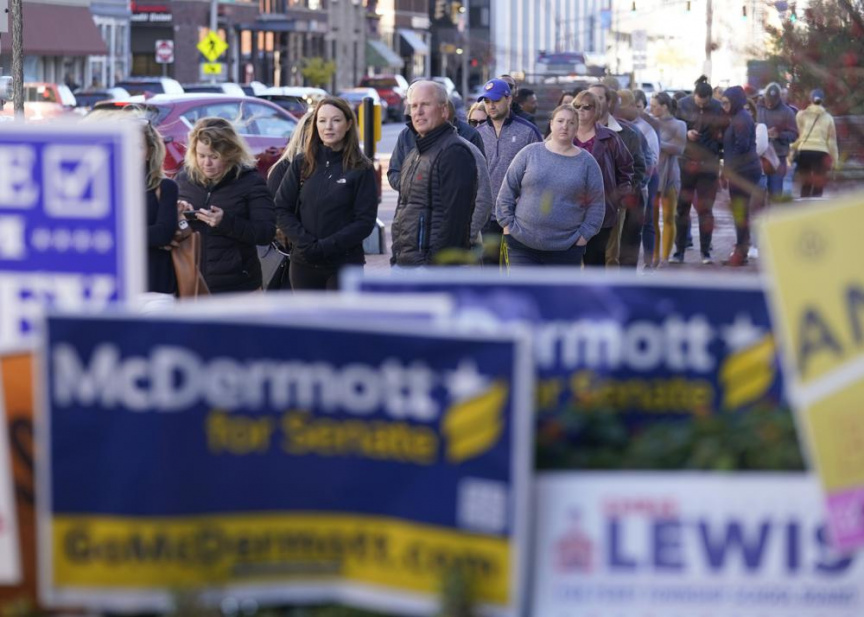 COATESVILLE, Pa. (AP) — An election year weighted by economic turmoil, elimination of federal abortion rights and broad concerns about the future of democracy concluded with a final full day of campaigning Monday by leaders of both parties urgently appealing to their supporters.

President Joe Biden was holding an evening rally in Maryland, where Democrats have one of their best opportunities to reclaim a Republican-held governor’s seat. That was consistent with Biden’s late-campaign strategy of sticking largely to his party’s strongholds rather than stumping in more competitive territory, where control of Congress may ultimately be decided.

Tuesday’s outcomes will have a powerful impact on the final two years of Biden’s presidency, shaping policy on everything from government spending to military support for Ukraine. In the first national election since the violent Jan. 6 insurrection, the final days of the campaign focused on fundamental questions about the nation’s political values.

Biden’s predecessor, Donald Trump, set his final rally of the campaign in Ohio. That state holds special meaning for the former president as he readies another run for the White House because it was one of the first places where he was able to prove his enduring power among Republican voters two years ago. Trump’s backing of JD Vance was crucial in helping the author and venture capitalist — and onetime Trump critic — secure the GOP’s nomination for a Senate seat.

Control of the Senate could come down to a handful of crucial races. Besides Ohio, those include Pennsylvania, where Democratic Lt. Gov. John Fetterman is locked in a close race against Republican celebrity surgeon Mehmet Oz.

“This is one of the most important races in America,” Fetterman told a crowd of about 100 Monday outside a union hall near a steel plate mill in Coatesville, about 40 miles west of Philadelphia. “Dr. Oz has spent over $27 million of his own money. But this seat isn’t for sale.”

Fetterman was introduced by Bernie Hall, Pennsylvania’s steelworkers union official, who acknowledged that some steelworkers vote Republican. That’s despite the union’s regular endorsements of Democrats at the top of tickets.

“But they’ll come home for Fetterman because he relates really well to blue-collar workers,” Hall said.

In Georgia, Democratic Sen. Raphael Warnock, who was in a nail-bitter with Republican Herschel Walker, tried Monday to cast himself as pragmatic and moderate — capable of succeeding in Washington even if the GOP has more power. Campaigning in Macon, Warnock promised to “do whatever I need to do and work with whomever I need to work with in order to get good things done.”

And in yet another hotly contested swing state, Arizona, Democratic Sen. Mark Kelly also tried to strike a moderate tone. He praised the state’s late Republican senator, John McCain, while noting that he didn’t ask Biden to campaign with him but would “welcome the president to come here at any point.”

“We’ve got a lot of issues facing Arizona and the country that we need to continue to work on. Drought, wildfires, the border. so many issues that need the highest attention.”

Meanwhile, Elon Musk, whose purchase of Twitter has roiled the social media world, used that platform Monday to endorse the GOP, writing, “I recommend voting for a Republican Congress, given that the Presidency is Democratic.”

That came too late for more than 41 million Americans who had already cast early ballots.

Biden has spent weeks warning of extremism which he says is increasingly common among many Republicans.

“You work like the devil to protect your climate,” the president told Democrats at a virtual reception Monday afternoon. “But, beyond that, American jobs, American ingenuity, to protect the fundamental rights and freedoms we have as Americans — which are very much in jeopardy if these MAGA Republicans take over.”

That referred to Trump’s “Make America Great Again” campaign slogan. Biden also raised concerns about voter intimidation during the midterms, saying, during an interview with the Rev. Al Sharpton, “America should feel safe going to the polls” and even mentioning people outside voting stations with automatic rifles.

Trump has long falsely claimed he lost the 2020 election only because Democrats cheated and has even begun raising the possibility of election fraud this year. Many Republican candidates across the country continue to adhere to his election denialism, even as federal intelligence agencies are warning of the possibility of political violence from far-right extremists.

None of that has deterred Trump from considering announcing a third presidential run at virtually any time — perhaps even Monday evening — but had not made a final decision, according to people familiar with his thinking. They spoke on condition of anonymity because they were not authorized to speak publicly by name.

Many others noted that Trump often focuses on drawing media attention and they saw the latest tease as aimed at generating excitement for his last rally. Trump won Ohio by 8 points in both 2016 and 2020.

Trump has long been eager to announce his intentions and increasingly explicit as he’s teased his plans. “I will probably have to do it again but stay tuned,” he said Sunday night.

Republican officials and some people in Trump’s orbit have urged him to wait until after the midterms to avoid turning the election into a referendum on him while shielding him from blame should Republicans -- especially candidates he endorsed -- not do as well as expected. But even people who had pushed for waiting now say those concerns are moot given that Election Day is here.

As the former president mulled shifting the focus to next cycle, Democrats were still hopeful of holding their narrow control of the House and Senate — despite Republican pronouncements that their party was in for a big night.

The GOP says voters will rebuke Democrats amid surging inflation, concerns about crime and pessimism about the direction of the country. History suggests any party in power will suffer significant losses in the midterms.

First lady Jill Biden campaigned Monday for Democratic Rep. Jennifer Wexton in a part of northern Virginia that Joe Biden carried two years ago. It could be an early indicator of GOP midterm strength should Wexton’s seat flip to her Republican challenger, Hung Cao.

The first lady told about 100 people outside a home in Ashburn, about 30 miles from Washington, that the race could come down to a tiny margin of votes, while, in Congress, a “Republican majority will attack women’s rights and health care.”