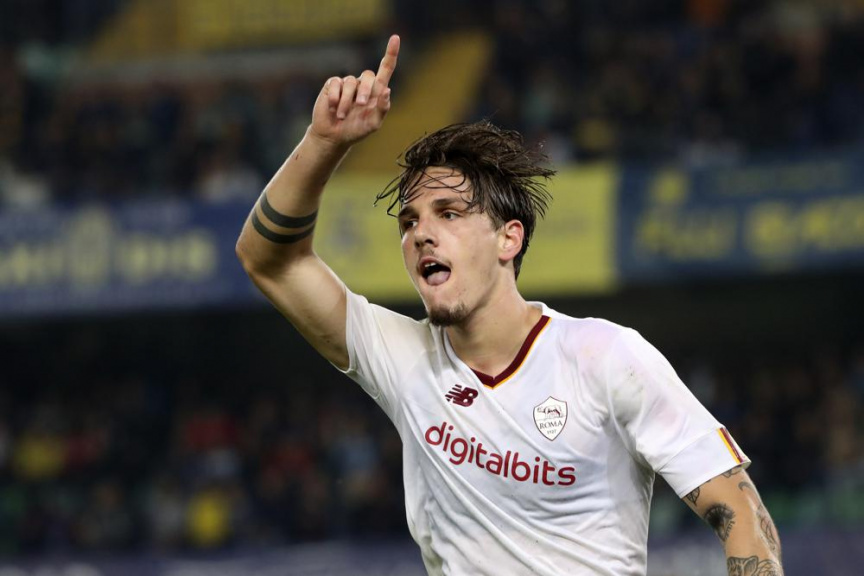 Roma's Nicolo Zaniolo celebrates after scoring during the Serie A soccer match between Hellas Verona and Roma, at the Marcantonio BentegodisStadium in Verona, Italy, Monday, Oct. 31, 2022. (Paola Garbuio/LaPresse via AP)

Teenage substitute Cristian Volpato scored one and set up another as Roma snatched a 3-1 win at 10-man Hellas Verona in Serie A on Monday.

Volpato put his side ahead with two minutes remaining and set up Stephan El Shaarawy in stoppage time as Roma leapfrogged city rival Lazio into fourth place, ahead of the capital derby next week.

Verona defender Paweł Dawidowicz scored the opener but was also sent off in the 36th minute. Nicolò Zaniolo leveled on the stroke of halftime.

Roma knew it could move into the Champions League spots with a win and had a gilt-edged opportunity to take the lead in the 19th minute when Tammy Abraham ran onto a throughball and rounded the goalkeeper but, instead of going into the empty net, his effort came off the base of the near post.

Verona went in front in the 26th with a well-worked set-piece. A corner found Davide Faraoni on the edge of the area and he played it for Dawidowicz to bundle into the bottom right corner.

Dawidowicz went from hero to villain 10 minutes later when he was sent off for a high and dangerous tackle on Zaniolo.

Zaniolo leveled in first-half stoppage time, slotting the rebound after another Abraham shot came off the post.

Roma hit the woodwork for a third time in the match eight minutes from time when Nemanja Matić headed a corner off the crossbar.

But they finally went in front six minutes later. Matić did well to pull the ball back for Volpato who fired into the bottom right corner.

The three points were assured when the 18-year-old Volpato threaded the ball to El Shaarawy for an angled drive past Verona goalkeeper Lorenzo Montipò.

Monza lost at home to Bologna 2-1 in its first match since defender Pablo Marí was stabbed in a knife attack in a Milan supermarket.

Mari was among five people attacked on Thursday by a man who grabbed a knife from a supermarket shelf. One died. Marí, on loan from Arsenal, was released from hospital on Sunday after undergoing surgery.

Monza players warmed up wearing special T-shirts dedicated to Marí. There was also a minute’s silence before kickoff in tribute to supermarket employee Luis Fernando Ruggieri who was killed.

Monza and Bologna were level on points going into the match. But Monza’s third straight league defeat after three successive wins left it four points above the relegation zone.