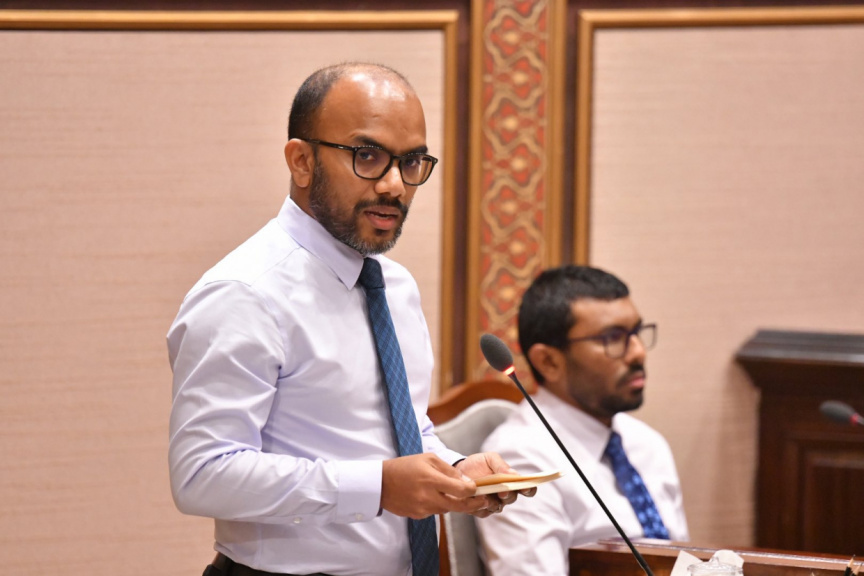 Finance Minister Ibrahim Ameer, on Monday, remarked that the government’s proposed state budget for next year is a hopeful one.

The Minister presented the proposed state budget of MVR 42.7 billion for next year to the Parliament earlier this morning.

During his presentation, Minister Ameer stated that 2023’s budget is a hopeful one. Detailing out many matters included in the budget, he explained that much of them have been put forth to address pressing issues in the respective sector. He also underscored that it was the first state budget since the economic dip from COVID-19 to cover recurrent expenses from the revenue earned.

Minister Ameer emphasized that the Maldives has overcome the worries of the COVID-19 pandemic today through the constructive measures taken by the government. As a result, he said that the nation’s economy will be at pre-pandemic levels by the end of this.

“With this, the financial policies initiated to overcome the COVID-19 pandemic must be normalized, and reverted back to the general state. Have to increase capacity to overcome various shocks to am extremely susceptible small economy such as the Maldives,” he had said.

Noting that 2023’s state budget is the first one being presented since the Maldives overcame the COVID-19 pandemic – he stressed that the budget was achieved by crossing a rough sea.

“Inflation rates of countries a rising. Developing countries have tightened monetary policies and increased interest rates. The government knows the Maldives will feel the impacts of this,” he added.

Speaking further, Minister Ameer said that 2023’s budget is a trustable roadmap based on previous experiences. He went on to state that it was a plan that will allow the government to continuously ensure the people’s affluence and social welfare.

“I believe that events unfolding across the globe at present have citizens’ concerned. That is concerns regarding the Maldivian economy, and its financial stature. Increase in state debt, and possible economic shocks have been heard of. Concerns have been raised over possible hikes in the prices of goods. Complaints regarding the lack of basic services, or low quality of such services have also been raised,” he had said.

As per the government, the main aim of the proposed budget for next year is to bridge the gap with respect to obstructions faced in light of the economic crisis arising as a result of the COVID-19 pandemic, and the hike in prices of goods in the global market due to the Russia-Ukraine war.

The government underscored that Maldives’ GDP has significantly progressed this year, and last year, after the country began to recover from the economic crisis plunged into by the COVID-19 pandemic. Taking these things into consideration – the government projects Maldivian economy to hit pre-pandemic levels by the end of this year. They also project the economy to grow by 7.6 percent next year.