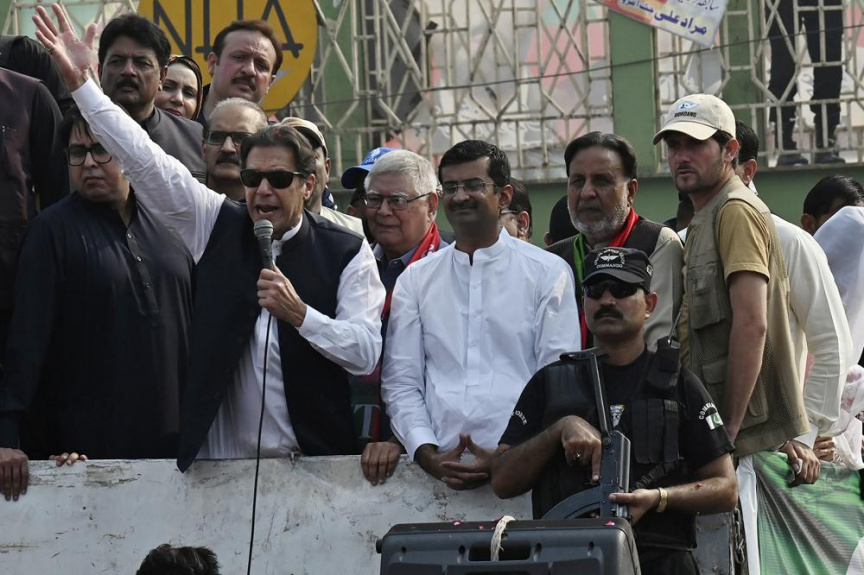 Sadaf Naeem, 36, a television journalist with Channel 5 in Lahore, was crushed to death after she slipped from the container truck Khan was traveling in, said Salman Zafar, assistant superintendent in Kamuke, one of the towns on the march’s path.

Khan’s convoy was making its way through Punjab province toward Islamabad on the march’s third day. The demonstrators were challenging Khan’s successor, Prime Minister Shahbaz Sharif and his government, demanding snap elections. It was the practice of Khan’s convoy team to invite a few journalists at a time onto the top of the truck to speak to Khan.

“Shocked & deeply saddened by the terrible accident that led to the death of Channel 5 reporter Sadaf Naeem during our March today,” Khan said in a tweet. “I have no words to express my sorrow. My prayers & condolences go to the family at this tragic time. We have cancelled our March for today.”

Sharif also expressed his condolences to Naeem’s bereaved family, announcing a roughly $20,000 donation to her relatives.

“Deeply saddened by the death of reporter Sadaf Naeem after falling from a long march container,” Sharif said in a tweet. “Cannot feel sad enough over this tragic incident. Heartfelt condolences to the family. Sadaf Naeem was a dynamic and hardworking reporter. We pray for patience for the family of the deceased.”

Naeem was the breadwinner for her family and had worked as a journalist for 12 years. Pakistani officials say they will bear the living costs and educational expenses of her two children, aged 17 and 21.

About 10,000 of Khan’s supporters, many of them piled into hundreds of trucks and cars, left from Lahore on Friday.

The convoy’s journey, expected to be capped with an open-ended rally in Islamabad, could present a significant challenge to the new administration. The rally could potentially also turn violent if police move in to disperse Khan’s supporters.