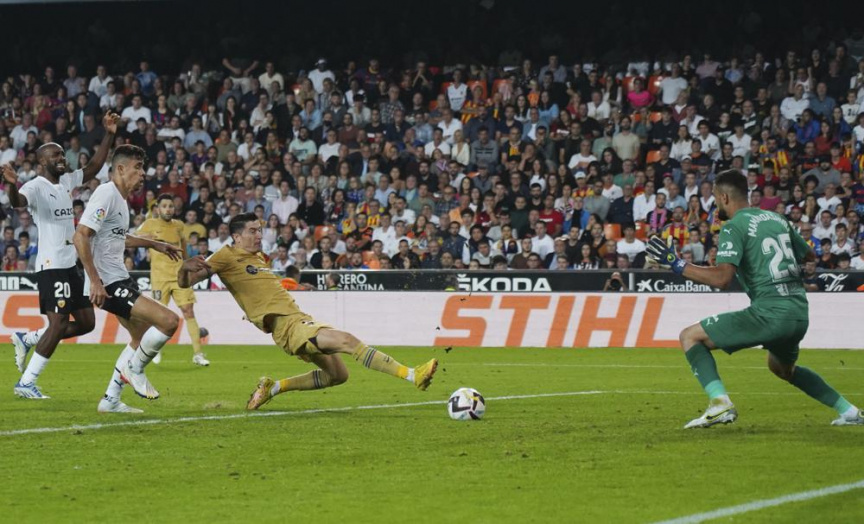 BARCELONA, Spain (AP) — Barcelona was on the brink of another setback when Robert Lewandowski stretched out his right boot and found the winner.

The Poland striker’s goal in stoppage time snatched a 1-0 victory at Valencia on Saturday, lifting Barcelona back to the top of the Spanish league standings level on points with Real Madrid.

Lewandowski’s last-gasp lunge spared Xavi Hernández’s side more disappointment three days after it bowed out of the Champions League at the group phase for a second consecutive year.

While failing to find the net in losses against Madrid and former club Bayern Munich, Lewandowski is enjoying some great form in the Spanish league with a league-high 13 goal in 12 rounds.

He again made up for the poor finishing of his teammates in Valencia when he steered a lobbed pass by Raphinha home for the late breakthrough.

Raphinha and Ferran Torres, players Barcelona spent over 110 million euros ($110 million) to bring in over the past year, both missed golden chances in the 85th after going on as substitutes. Pedri González fed what looked like a perfect assist to Torres, but instead of just pushing it home the former Valencia and Manchester City forward shot the ball off his other leg. Raphinha then smashed the rebound over the bar.

But the connection between Raphinha and the team’s new star was enough to take the three points from Mestalla Stadium.

“This is a very important victory for us, above all for how we won,” Xavi said. “We played with jitters today. We tried to disconnect and move on from the Champions League, but you could see that we’re still affected. We still deserved the win, even if it came in the final seconds.”

Madrid can recover the lead when it plays Girona on Sunday.

While Barcelona pulled out a win in the dying moments, for a second straight game Atlético Madrid was betrayed on the final touch of the ball.

Cádiz beat Atlético 3-2 after Rubén Sobrino knocked in a cross just before the final whistle to tilt the seesaw contest finally in the hosts’ favor.

The last-second loss came just three days after Atlético was also eliminated from the Champions League at the group phase following a 2-2 draw against Bayer Leverkusen. Atlético’s Yannick Carrasco had a penalty saved and two efforts to put in the rebound by teammates failed on the final kicks of the match.

Cádiz led 2-0 until substitute João Félix sparked a late comeback by Atlético. His scissor kick was turned into his own net by Luis Hernández in the 85th and Félix equalized with a long strike in the 89th.

But a last-gasp surge by Cádiz paid off when Sobrino was left unmarked at the far post where he used his torso to turn in a cross and unleash the revelry at Nuevo Mirandilla Stadium.

It was the relegation-threatened Cádiz’s first victory at home this season.

A solo effort by Rayo Vallecano winger Álvaro García on a counterattack was enough to beat Sevilla 1-0 and deal the struggling team another blow in front of its fans.

Sevilla joined in the debacle for Spanish teams this week in the Champions League when it was also eliminated. The team has yet to win a home game in this league, and the coaching change with Jorge Sampaoli replacing Julen Lopetegui has yet to turn things around.

Sevilla remained on the edge of the relegation zone, far from last season’s fourth-place finish.

Almería also came from behind to beat 10-man Celta Vigo 3-1.

Koundé and García, both Barcelona players, were both substituted in the second half at Valencia. Xavi said it appeared that neither injury was serious.

Cavani went down early for Valencia, holding his lower right leg and grimacing as he walked off. Cavani has been included on Uruguay coach Diego Alonso’s preliminary list for Qatar. Valencia coach Gennaro Gattuso said Cavani had pain in his ankle that would need to be examined.

Atlético’s Morata had to be substituted due to a contusion in his right foot.