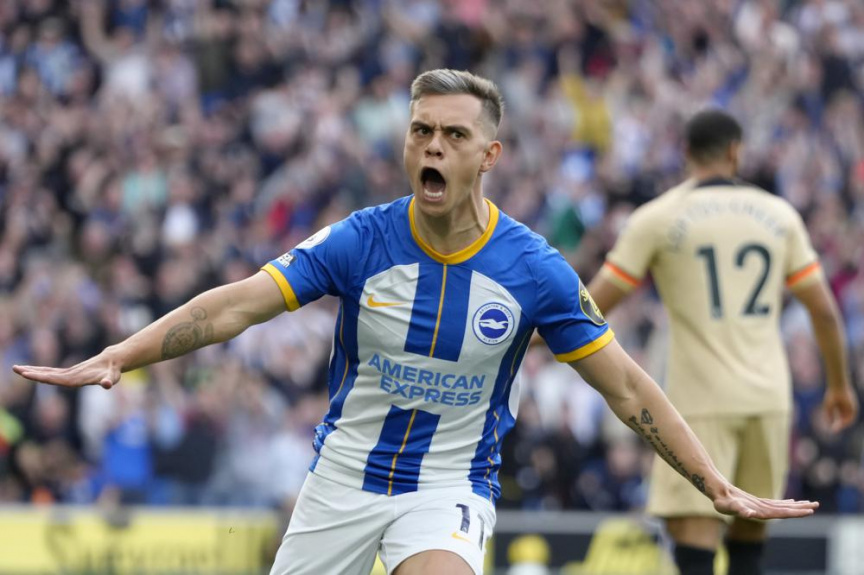 LONDON (AP) — Well before halftime, Brighton supporters were already taunting the manager they once adored with chants of “You’re getting sacked in the morning.”

Graham Potter may not have to worry about being fired just yet, but his return to Brighton created the closest thing to a crisis he has experienced in his fledgling Chelsea reign.

Brighton beat Chelsea 4-1 in the English Premier League on Saturday to hand Potter his first loss since leaving the south-coast club to take over the Blues in September. After a strong start under Potter, Chelsea has dropped points in three straight league games following draws against Brentford and Manchester United.

And the worst part for Chelsea was that the scoreline wasn’t at all misleading.

Brighton was 2-0 up after 14 minutes and added the third before halftime, having looked more confident and ambitious than the visitors who saw forward Christian Pulisic miss their best chance when he somehow shot wide with the goal gaping after a rebound. Kai Havertz pulled one back for Chelsea early in the second half but Pascal Gross finished off the scoring in injury time for the hosts.

Brighton has taken just two points from a possible 15 since Potter’s departure but earned a first win under new coach Roberto De Zerbi — and the club’s first over Chelsea since 1933.

The loss means Chelsea dropped eight points behind Manchester City, which took the overnight lead in the standings by beating Leicester 1-0 away thanks to an inch-perfect free kick from Kevin De Bruyne in the second half.

Liverpool is far off thinking about the title after losing at home to Leeds 2-1, the latest poor result in the league in what is proving a difficult season for Jurgen Klopp’s team.

City was without star striker Erling Haaland for the first time because of an ankle problem that will also likely see the Norway international miss the midweek Champions League match against Sevilla, if not the league game against Fulham next weekend.

“We have seven days until then so we will see,” City manager Pep Guardiola said.

De Bruyne made sure Haaland’s absence wasn’t too keenly felt by curling in a set-piece from 25 meters that dipped under the crossbar and in via the post in the 49th minute.

Guardiola has publicly challenged De Bruyne, who won English soccer’s player of the year award the last two seasons, to raise his level even higher for the club. The quality of the free kick the Belgium playmaker produced to beat Leicester was certainly top class.

“He’s back,” Guardiola said of De Bruyne. “He was not playing good in the last games. (Today he was) amazing. He knows it.”

Leeds manager Jesse Marsch was the league manager under the biggest pressure heading into this round, with his team having lost its last four games and dropped into the relegation zone.

No wonder the coach looked emotional after the victory at Anfield, which was sealed by Crysencio Summerville’s 89th-minute goal.

Liverpool battled back from conceding a bizarre fourth-minute opener to Rodrigo, after goalkeeper Alisson Becker slipped as he tried to get to Joe Gomez’s backpass across the face of the box.

Mohamed Salah equalized and Liverpool had 22 shots in total, without ever looking convincing in its first league loss in front of a full crowd at Anfield since April 2017.

While Leeds climbed out of the relegation zone following its first win since August, Liverpool remained marooned in mid-table and eight points from the top four.

Tottenham manager Antonio Conte was furious after his team was denied a late winner against Sporting by VAR in the Champions League in midweek, but there was no stopping the team’s celebrations after coming from two goals down to beat Bournemouth 3-2.

“It was vital to win this game,” said Conte, whose team had lost its last two league games.

Newcastle’s place in the top four is looking more and more warranted.

The Saudi-owned club beat Aston Villa 4-0 for its fifth win of its last six matches, including one over Spurs.

After Villa goalkeeper Emiliano Martinez went off with a concussion in the first half — having initially tried to play on despite looking groggy following a collision — Callum Wilson scored two for Newcastle before Joelinton and the in-form Miguel Almiron added one each.

Crystal Palace beat Southampton 1-0 for a third straight home win while Brentford settled for 1-1 against Wolverhampton, whose striker Diego Costa was sent off for a headbutt in stoppage time.