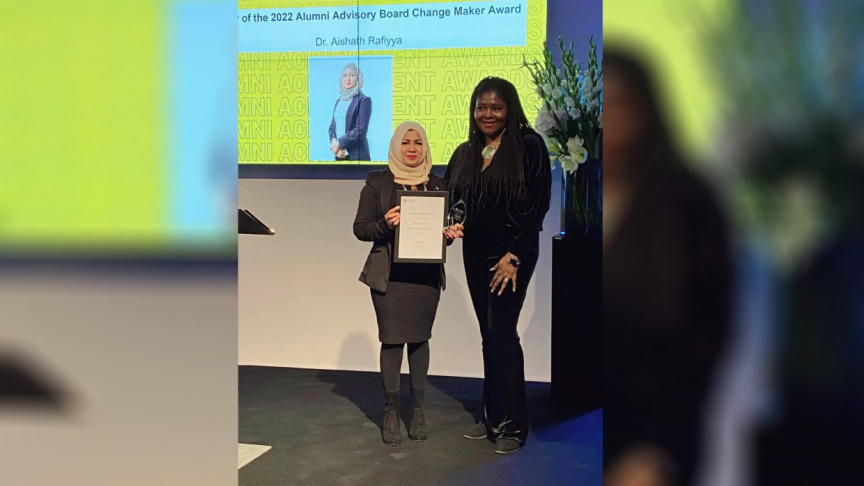 Dr. Aishath Rafiyya has been conferred the Change Maker Award 2022 from the University of East London (UEL) School of Architecture, Computing and Engineering.

UEL’s Alumni Advisory Board Change Maker accolade recognizes six alumni, one from each school, who have made a deep and lasting impact and enter into the equivalent of a ‘hall of fame’.

Rafiyya said she was honored to receive the award.

“Becoming the first Maldivian to receive such an accolade from the University of East London is a great career boost. This proves the university acknowledges and recognizes my contributions,” she said.

Rafiyya came second in the course and won the programing project award when she attained her Honors in Business Information System from the UEL.

Rafiyya has volunteered her services in various social projects, winning national and international awards for her contributions over the years.

She is especially recognized for her efforts to empower women and youth, and promote peace and stability as founder of Regional Alliance for Fostering Youth (RAFY) and as executive director at Global Peace Institute, London.

Rafiyya serves as a director at Sun Siyam Group.

She previously also served as a director at State Trading Organization (STO), and for the Male’ City Women’s Development Committee, Bank of Maldives (BML), Foreign Ministry, and the Maldivian Embassy in Bangladesh.

Rafiyya advocates for women’s rights in various national and international platforms, and has conducted research in the area and given keynote speeches in various conferences.

Rafiyya made history when she was elected as deputy leader of Maldives Development Alliance (MDA), becaming the youngest and the first woman to be elected a deputy leader at a political party in Maldives. She is also the longest serving female deputy political leader.

She has received 20 different national and international awards for her contributions, including the Stevie Silver Award, JCI Ten Outstanding Young Persons of the World (JCI TOYP) Award, and the National Youth Award.

'Only Siyam capable of evolutionary change to Maldives'