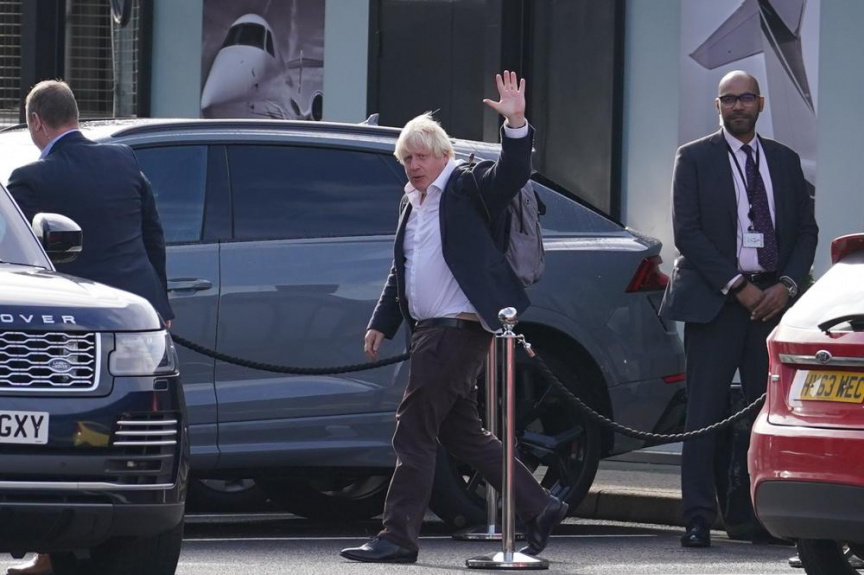 Former Prime Minister Boris Johnson arrives at Gatwick Airport in London, after travelling on a flight from the Caribbean, following the resignation of Liz Truss as Prime Minister, Oct. 22, 2022. (Gareth Fuller/PA via AP, File)

LONDON (AP) — Former British Prime Minister Boris Johnson announced Sunday he will not run to lead the Conservative Party, ending a short-lived, high-profile attempt to return to the prime minister’s job he was ousted from little more than three months ago.

His withdrawal leaves former Treasury chief Rishi Sunak the strong favorite to become Britain’s next prime minister — the third this year — at a time of political turmoil and severe economic challenges. He could win the contest as soon as Monday.

Johnson, who was ousted in July amid ethics scandals, had been widely expected to run to replace Liz Truss, who quit last week after her tax-cutting economic package caused turmoil in financial markets, was rapidly abandoned and and obliterated her authority inside the governing party.

Johnson spent the weekend trying to gain support from fellow Conservative lawmakers after flying back from a Caribbean vacation and held talks with the two other contenders, Sunak and House of Commons Leader Penny Mordaunt.

Late Sunday he said he had amassed the backing of 102 colleagues, more than the threshold of 100 needed to make a ballot of lawmakers on Monday.

But he was far behind Sunak in support, and said he had concluded that “you can’t govern effectively unless you have a united party in Parliament.”

The prospect of a return by Johnson had thrown the already divided Conservative Party into further turmoil. He led the party to a thumping election victory in 2019, but his premiership was clouded by scandals over money and ethics that eventually became too much for the party to bear.

In his Sunday statement, Johnson insisted he was “well placed to deliver a Conservative victory” in the next national election, due by 2024. And he said that he likely would have won a ballot of Conservative Party members against either of his rivals.

“But in the course of the last days I have sadly come to the conclusion that this would simply not be the right thing to do,” he said. “Therefore I am afraid the best thing is that I do not allow my nomination to go forward and commit my support to whoever succeeds.”

But he hinted he might be back, saying: “I believe I have much to offer but I am afraid that this is simply not the right time.”

After Truss quit on Thursday, the Conservative Party hastily ordered a contest that aims to finalize nominations Monday and install a new prime minister — its third this year — within a week.

The clear favorite now is Sunak, who has support from more than 140 lawmakers, according to unofficial tallies. Mordaunt is backed by fewer than 30.

If both make the ballot, the 357 Conservative lawmakers will hold an indicative vote on Monday to show their preference before the choice goes to the 172,000 party members around the country. If Mordaunt does not reach 100 nominations, Sunak will win by acclamation.

Sunak, 42, was runner-up after Truss in this summer’s Tory leadership race to replace Johnson. On Sunday, he confirmed he was running again in the latest leadership contest.

“There will be integrity, professionalism and accountability at every level of the government I lead and I will work day in and day out to get the job done,” Sunak said in a statement.

Johnson’s exit came only hours after allies insisted he would run. Business Secretary Jacob Rees-Mogg told the BBC on Sunday that he spoke with Johnson and “clearly he’s going to stand” after flying back to London Saturday from a vacation in the Dominican Republic.

But Northern Ireland minister Steve Baker, a former backer of Johnson and an influential politician within the Conservative Party, warned a Johnson comeback would be a “guaranteed disaster.” Baker noted that Johnson still faces an investigation into whether he lied to Parliament while in office about breaking his government’s own coronavirus restrictions during parties at Downing Street.

If found guilty, Johnson could be suspended as a lawmaker.

“This isn’t the time for Boris and his style,” Baker told Sky News on Sunday. “What we can’t do is have him as prime minister in circumstances where he’s bound to implode, taking down the whole government ... and we just can’t do that again.”

Truss quit Thursday after a turbulent 45 days, conceding that she could not deliver on her botched tax-cutting economic package, which she was forced to abandon after it sparked fury within her party and weeks of turmoil in financial markets.

Sunak, who was Treasury chief from 2020 until this summer, steered Britain’s slumping economy through the coronavirus pandemic. He quit in July in protest at Johnson’s leadership.

In the summer contest to replace Johnson, Sunak called promises by Truss and other rivals to immediately slash taxes reckless “fairy tales” and argued that soaring inflation must be controlled first.

Tory voters backed Truss over Sunak, but he was proved right when Truss’ unfunded tax-cutting package triggered chaos in the markets in September. Now the task of stabilizing Britain’s wobbling economy is likely to fall to him.