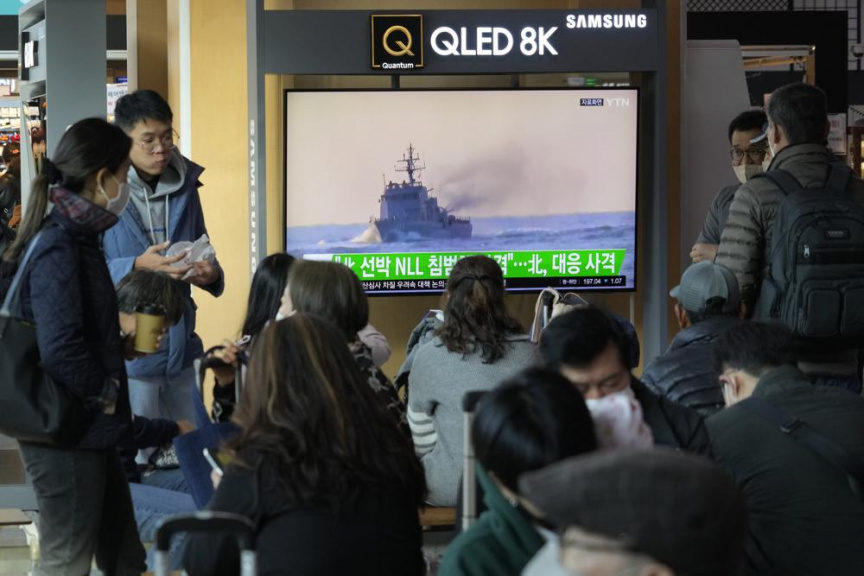 SEOUL, South Korea (AP) — North and South Korea exchanged warning shots Monday along their disputed western sea boundary — a scene of past bloodshed and naval battles — in a development that raises worry of possible clashes after North Korea’s recent barrage of weapons tests.

South Korea’s navy broadcast warnings and fired warning shots to repel a North Korean merchant ship that violated the sea boundary at 3:42 a.m., the Joint Chiefs of Staff said in a statement.

North Korea’s military said its coastal defense units responded by firing 10 rounds of artillery warning shots toward its territorial waters, where “naval enemy movement was detected.” It accused a South Korean naval ship of intruding into North Korean waters on the pretext of cracking down on an unidentified ship.

There were no reports of fighting, but the sea boundary off the Korean Peninsula’s west coast is a source of long-running animosities. The American-led U.N. command drew a boundary at the end of the 1950-53 Korean War, but North Korea insists upon a boundary that encroaches deeply into waters controlled by the South. Among the deadly events that have happened in the area are the North’s shelling of a South Korean island and its alleged torpedoing of a South Korean navy ship, both in 2010. The two attacks killed 50 South Koreans.

Analyst Cheong Seong-Chang at the private Sejong Institute in South Korea said North Korea had likely intentionally plotted its ship incursion because it would be “unimaginable” for a North Korean merchant ship to cross the boundary that early in a day without the permission of the North’s military.

Cheong said North Korea is increasingly emboldened by its recent missile tests in which North Korea said it simulated the use of tactical nuclear weapons to attack South Korean and U.S. targets. He noted Pyongyang would also know Washington’s strained relationships with Russia and China make it more difficult for the U.S. to draw cooperation from the two regional powers on the North Korean issue.

The General Staff of the North’s Korean People’s Army accused South Korea of provoking animosities near their land border as well with its own artillery tests and propaganda loudspeaker broadcasts. South Korea has already confirmed it performed artillery firings last week as part of its regular military exercises, but denied that it resumed the loudspeaker broadcasts that both Koreas halted under the 2018 agreement.

“The KPA General Staff once again sends a grave warning to the enemies who made even naval intrusion in the wake of such provocations as the recent artillery firing and loudspeaker broadcasting on the ground front,” the North’s statement said.

North Korea has said its recent weapons tests involving nuclear-capable missiles and artillery shells were a response to joint South Korean-U.S. military drills that it views as an invasion rehearsal.

Some observers say North Korea could extend its spate of testing, conduct its first nuclear test in five years or launch other provocations near the western sea border or elsewhere as South Korean and U.S. militaries continue their combined military exercises.

The South Korean military is currently conducting its annual field exercises, which involve U.S. troops this year. As part of the drills, the South Korean and U.S. militaries began large-scale, four-day firing exercises off the peninsula’s west coast on Monday. The drills would mobilize South Korean destroyers and fighter jets and U.S. helicopters and aircraft, the South Korean navy said in a statement.

Washington and Seoul had scaled back or canceled their regular drills in recent years to support their now-dormant nuclear diplomacy with North Korea or guard against the COVID-19 pandemic. But the allies have been reviving or expanding those trainings since the May inauguration of conservative South Korean President Yoon Suk Yeol, who vows a tougher stance on North Korean provocation.

Next week, South Korea and the United States are to hold joint air force drills involving some 240 warplanes, including F-35 fighters operated by both nations. The drills are aimed at inspecting the two countries’ joint operation capabilities and improve combat readiness, the South Korean military said Tuesday.

Some experts say the North Korean tests also suggest its leader Kim Jong Un has no intentions of resuming stalled nuclear diplomacy with Washington anytime soon as he would want to focus on further modernizing his nuclear arsenal to boost his leverage in future negotiations with the United States.