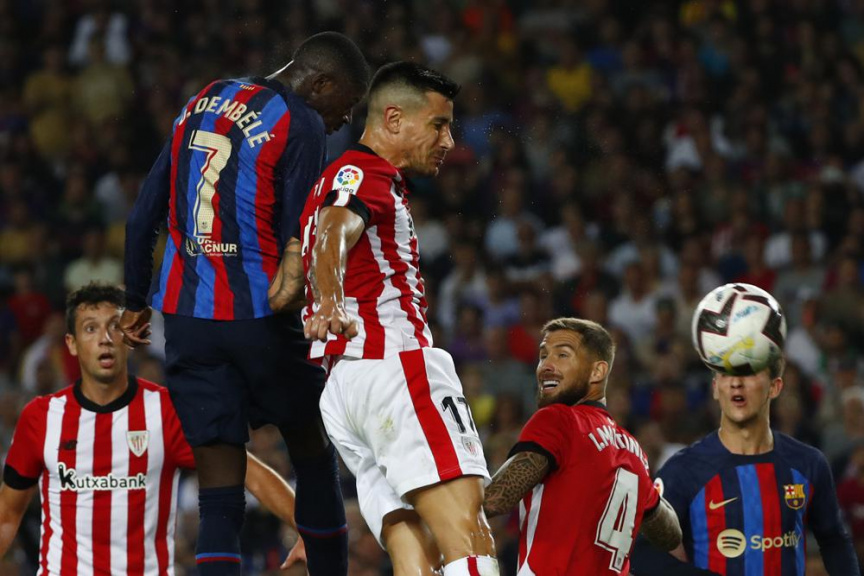 MADRID (AP) — Barcelona is not wasting time putting its opponents away in the Spanish league.

After scoring three goals in the space of seven minutes in a win over Villarreal on Thursday, Barcelona found the net three times in a 10-minute span on Sunday to beat Athletic Bilbao 4-0 and stay close to leader Real Madrid at the top of the standings.

The league victory comes three days before the Catalan club will look for close to a miracle to avoid elimination in the Champions League. Barcelona hosts Bayern Munich but needs Inter Milan not to defeat last-place Viktoria Plzen at home in the other group match.

Ousmane Dembélé, Sergi Roberto and Robert Lewandowski scored a goal each early in the first half at Camp Nou to put Barcelona on track to its second straight win after a loss in the “clásico” against Madrid.

“We came out strong and got everything right in those 10 minutes,” Barcelona midfielder Sergio Busquets said. “That allowed us to stay in control during the rest of the match.”

Dembélé scored with a header in the 12th, Roberto increased the lead from close range in the 18th and Lewandowski netted his fifth goal in four matches from inside the area in the 22nd. Ferran Torres sealed the victory in the 73rd.

Barcelona had beaten Villarreal 3-0 at home on Thursday, with Lewandowski scoring twice.

“We have recovered well after the Madrid loss,” Busquets said. “We played well against Villarreal and today. We will keep fighting at the top.”

Barcelona saw both Gavi Páez and Roberto replaced because of injuries.

Antoine Griezmann scored twice, including directly from a corner kick, to give Atlético the win at Betis.

Griezmann opened the scoring in the 54th minute with a left-footed corner that curled across the goalmouth and went in after bouncing off a defender on the goal line.

“I told the referee that I was missing a goal ‘Olímpico,’” Griezmann said. “I tried to send it firmly, curling in, and got a bit lucky as well.”

The France striker added to the lead from inside the area in the 71st for his third goal in the last three matches with Atlético.

Betis, which has won only one of its last five league matches, scored its lone goal with a free kick by Nabil Fekir in the 84th. The hosts nearly equalized in stoppage time with a close-range header from Álex Moreno that struck the crossbar. Betis had a goal disallowed for offside early in the second half.

Manuel Pellegrini’s team entered the game undefeated at home in the league this season. It stayed in fifth place.

Atlético has won four of its last five matches in the Spanish league. It was coming off a 1-1 draw against Rayo Vallecano at home, when it conceded in stoppage time.

Seventh-place Villarreal beat Almería 2-1 at home with midfielder Álex Baena scoring one of the goals and immediately being sent off with a second yellow card for pulling the jersey over his head to show a message in honor of a club vice president who died last week.

Baena showed the message, “Thank you for everything, Llaneza,” referring to José Manuel Llaneza, considered the architect of Villarreal’s project that led the club to its recent successes.

Nicolas Jackson scored Villarreal’s winner four minutes into stoppage time, then players gathered at midfield after the match to dedicate the victory to Llaneza.

Eighth-place Osasuna was held to a 1-1 draw at relegation-threatened Girona. Osasuna’s Moroccan midfielder Ez Abde had to be replaced in the first half with an apparent muscle injury.

Last-place Elche remained the only winless team in the league after a 2-2 draw at Espanyol. It was the second draw in three matches for Elche, which was coming off a 3-0 loss to Madrid at home. It has seven losses from its 11 matches. Espanyol, with two wins, was in 13th place.