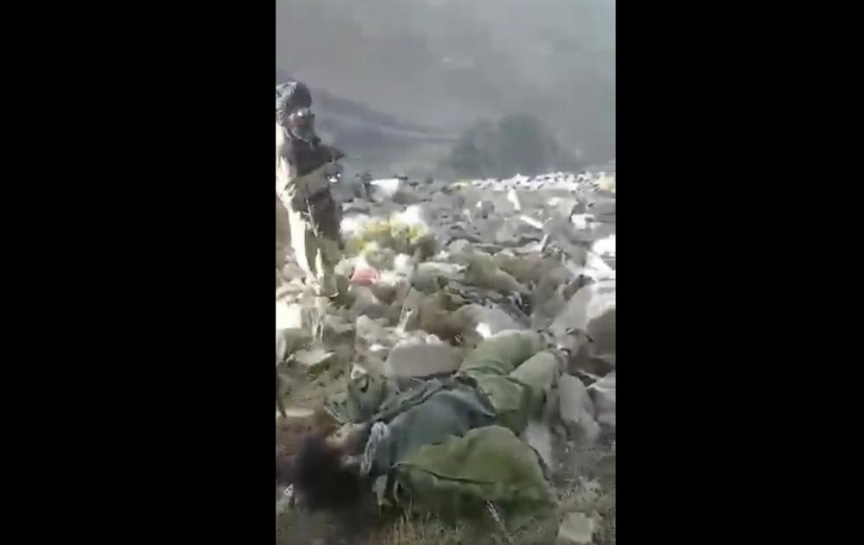 In this frame grab from video that was likely taken by the Taliban and posted online and provided by Afghan Witness, a UK-based open-source nonprofit, a Taliban fighter stands amid bodies on the ground, in the Dara district, of Panjshir province, Afghanistan, Sept. 14, 2022. (Afghan Witness via AP)

ISLAMABAD, Pakistan (AP) — The Taliban captured, bound and shot to death 27 men in Afghanistan’s Panjshir Valley last month during an offensive against resistance fighters in the area, according to a report published Tuesday, refuting the group’s earlier claims that the men were killed in battle.

One video of the killings verified by the report shows five men, blindfolded with their hands tied behind their backs. Then, Taliban fighters spray them with gunfire for 20 seconds and cry out in celebration.

The investigation by Afghan Witness, an open-source project run by the U.K.-based non-profit Center for Information Resilience, is a rare verification of allegations that the Taliban have used brutal methods against opposition forces and their supporters, its researchers said. Since taking power in August 2021, the Taliban have imposed a tighter and harsher rule, even as they press for international recognition of their government.

David Osborn, the team leader of Afghan Witness, said the report gives the ”most clear-cut example” of the Taliban carrying out an “orchestrated purge” of resistance fighters.

Afghan Witness said it analyzed dozens of visual sources from social media — mostly videos and photographs — to conclusively link one group of Taliban fighters to the killings of 10 men in the Dara District of Panjshir, including the five seen being mowed down in the video.

It said it also confirmed 17 other extrajudicial killings from further images on social media, all showing dead men with their hands tied behind their backs. Videos and photos of Taliban fighters with the bodies aided geolocation and chrono-location, also providing close-ups of the fighters at the scene. These were cross-referenced with other videos suspected to feature the group.

“Using open-source techniques we have established the facts around the summary and systematic execution of a group of men in the Panjshir Valley in mid-September,” Osborn said. “At the time of their execution, the detained were bound, posing no threat to their Taliban captors.”

Enayatullah Khawarazmi, the Taliban-appointed spokesman for the defense minister, said a delegation is investigating the videos released on social media. He said he was unable to give further details as the investigation is ongoing.

Zabihullah Mujahid, the spokesman for the Taliban-run government, was not immediately available for comment.

Last month, Mujahid was reported as saying the Taliban had killed 40 resistance fighters and captured more than 100 in Panjshir. He gave no details on how the 40 men died.

The force fighting in the mountainous Panjshir Valley north of Kabul — a remote region that has defied conquerors before — rose out of the last remnants of Afghanistan’s shattered security forces. It has vowed to resist the Taliban after they overran the country and seized power in August 2021.

Ali Maisam Nazary, head of foreign relations at the National Resistance Front for Afghanistan, said: “The Taliban committed war crimes by killing POWs that surrendered to them point blank and the videos are evidence of this.”

Afghan Witness said it has credible evidence of a further 30 deaths due to last month’s Taliban offensive against alleged resistance fighters in Panjshir.