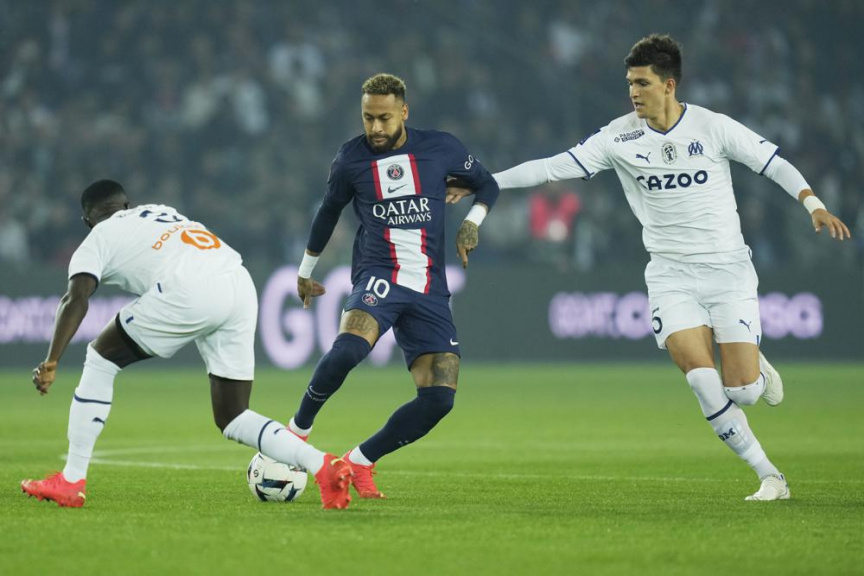 PSG's Neymar, centre, challenges for the ball with Marseille's Leonardo Balerdi, right, and Eric Bailly during the French League One soccer match between Paris Saint-Germain and Marseille at the Parc des Princes in Paris, Sunday, Oct. 16, 2022. (AP Photo/Thibault Camus)

PARIS (AP) — Neymar scored his ninth goal in the French league this season to guide Paris Saint-Germain to a 1-0 win over bitter rival Marseille in French soccer’s biggest game on Sunday.

Still unbeaten this campaign, PSG posted its ninth win in 11 league games to move three points clear of Lorient at the top of the standings. Marseille slumped to a second straight loss and dropped to fourth place, six points behind PSG.

Only Lille forward Jonathan David has scored as many goals as Neymar in the French league this season. Neymar has also delivered seven assists.

The Brazil striker broke the deadlock in first-half stoppage time at the conclusion of a counterattack.

Back from injury, Lionel Messi hit the crossbar and combined well with Neymar and Kylian Mbappé throughout the game with the “MNM” combination creating many chances on the break in a lively match at the Parc des Princes.

Marseille was well organized and continued to press even after it was reduced to 10 players in the 73rd minute when Samuel Gigot was sent off for a late tackle on Neymar.

PSG could have won by a larger margin but Marseille goalkeeper Pau Lopez made eight saves to keep his team in the match.

Known as “Le Classique,” the game between PSG and Marseille became popular during the 1990s when the arrival in the French league of stars such as Rudi Voeller and George Weah ignited a strong rivalry.

But Marseille, the only French team to win the Champions League back in 1993, has fallen well behind since PSG was taken over by Qatari investors in 2011.

The southern French club is, however, enjoying a strong revival under coach Igor Tudor and hoped for its first win against PSG in two years.

The game started at a high tempo with PSG taking control immediately.

Messi tested Lopez twice, before Achraf Hakimi lost his one-on-one with the Marseille goalkeeper. Lopez was decisive again in the 19th to deny a low shot from Mbappé with a diving save to his right side.

In the 28th, Neymar found Mbappé behind the defense with the World Cup winner forcing Lopez to parry the ball away with a firm left hand.

PSG continued to push and was rewarded with a free kick on the edge of the box after Messi was brought down. The former Barcelona player took the free kick and fired onto the crossbar. Lopez did not move.

Marseille waited for openings and stuck to its game plan with a high press. It finally cracked at the stroke of halftime when Amine Harit gave the ball away in its own half. Vitinha launched a quick counterattack, with Mbappé finding Neymar at the penalty spot. The Brazil forward slotted the ball in off the post.

Marseille fought hard for an equalizer, with good efforts from Chancel Mbemba and Jonathan Clauss that were denied by Gianluigi Donnarumma.

Laurent Blanc could not turn Lyon’s fortunes around in his first match in charge.

The former Bordeaux and PSG coach was appointed last week as the replacement for Peter Bosz with the mission to put the seven-time champions back on track.

His arrival did not produce an immediate effect, though, and Lyon lost 3-2 at Rennes to extend its current winless run to six matches.

Lyon started the season with big ambitions, aiming for Champions League qualification, but it has won just four of 11 league matches so far.

Forward Alexandre Lacazette scored twice for Lyon, but his brace was not enough to make up for the team’s defensive frailties.

“When you concede three goals, you need to score four, it’s too much,” Blanc said. “And my players did not come back on the field focused enough after halftime, so I’m pretty upset.”

The 56-year-old Blanc has been successful during his previous stints managing French clubs, winning the league title in 2009 with Bordeaux when he ended Lyon’s long reign, then three times at the helm of PSG from 2014-16.

Elsewhere, Nantes moved out of the relegation zone with a 4-1 thrashing of last-place Brest and Toulouse beat Angers 3-2. Ajaccio drew 1-1 at Troyes and Auxerre was held 1-1 at home by Nice.

Quickly reduced to 10 men against Clermont at home, Monaco broke the deadlock through a penalty converted by Breel Embolo at the half-hour mark but could not hold onto its lead. Komnen Andric leveled the scoring in the second half of the 1-1 draw.

On Saturday, second-place Lorient had missed the chance to move to the top of the league after drawing with 10-man Reims 0-0 at home.