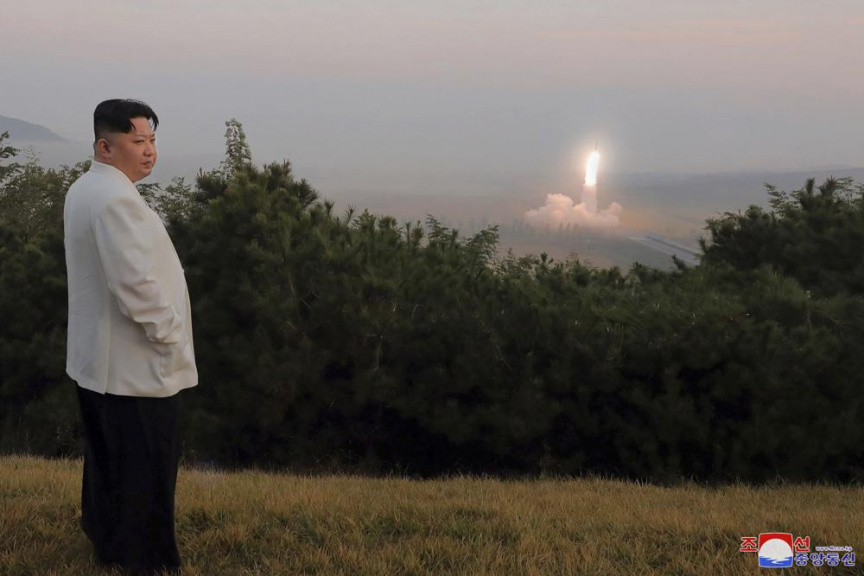 The North’s statement, released on the 77th birthday of its ruling Workers’ Party, is seen as an attempt to buttress a public unity behind Kim as he faces pandemic-related economic hardships, a security threat posed by the boosted U.S.-South Korean military alliance and other difficulties.

“Through seven times of launching drills of the tactical nuclear operation units, the actual war capabilities … of the nuclear combat forces ready to hit and wipe out the set objects at any location and any time were displayed to the full,”,” the North’s official Korean Central News Agency said.

Viewing the drills as a military threat, North Korea decided to stage “the simulation of an actual war” to check and improve its war deterrence and send a warning to its enemies, KCNA said.

North Korea considers U.S.-South Korean military drills as an invasion rehearsal, though the allies have steadfastly said they are defensive in nature. Since the May inauguration of a conservative government in Seoul, the U.S. and South Korean militaries have been expanding their exercises, which had been previously scaled back due to the pandemic and the now-dormant nuclear diplomacy between Pyongyang and Washington.

The launches — all supervised by Kim — included a nuclear-capable ballistic missile launched under a reservoir in the northeast; another ballistic missile also simulating the loading of tactical nuclear warheads designed to strike South Korean airfield; and a new-type ground-to-ground ballistic missile that flew over Japan, KCNA reported.

Kim said the launches were “an obvious warning” to South Korea and the United States, informing them of North Korea’s nuclear response posture and attack capabilities, KCNA said.

“The U.S. and the South Korean regime’s steady, intentional and irresponsible acts of escalating the tension will only invite our greater reaction, and we are always and strictly watching the situation crisis,” KCNA said.

Kim also made it clear again that he has no intentions of resuming the disarmament diplomacy with the United States now and would rather focus on expanding his weapons arsenal.

“Saying that the enemies have still talked about dialogue and negotiation while posing military threats to us, but we have no content for dialogue with the enemies and felt no necessity to do so,” Kim was quoted as saying. “Above all, we should send a clearer signal to the enemies escalating the regional situation by involving the huge armed forces in any time with more powerful and resolute will and action.”

Kim said he would sternly take all unspecified military steps if necessary to respond to potential additional moves by South Korea and the United States. He also expressed conviction that the nuclear combat forces of his military would maintain “their strongest nuclear response posture and further strengthen it in every way” to perform their duties of defending the North’s dignity and sovereign rights.

U.S. officials have repeatedly urged North Korea to return to talks without any preconditions. But North Korea has said it won’t do so unless the United States first drops its hostile polices on the North, in an apparent reference to regular U.S. and South Korean military drills and U.S.-led economic sanctions.

Some experts say Kim would eventually aim to use his advanced nuclear program to win a U.S. recognition of North Korea as a legitimate nuclear state, which Kim sees as essential in getting crippling U.N. sanctions on his country lifted.

“Pyongyang has been concerned about military exercises by the U.S., South Korea and Japan, so to strengthen its self-proclaimed deterrent, it is making explicit the nuclear threat behind its recent missile launches. The KCNA report may also be a harbinger of a forthcoming nuclear test for the kind of tactical warhead that would arm the units Kim visited in the field,” Easley said.