Trial begins in Spain over 2013 train crash that killed 80 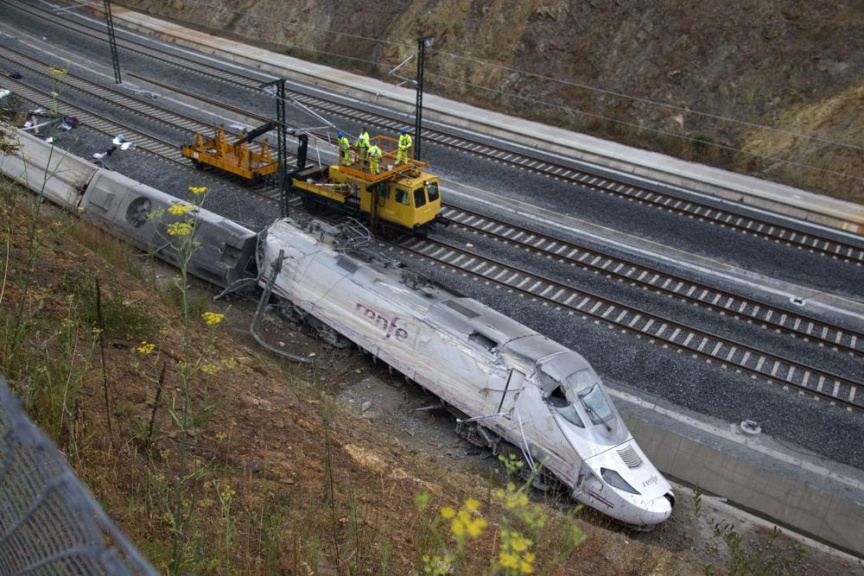 FILE - Rail workers are seen next to derailed cars at the site of a train accident in Santiago de Compostela, Spain, on July 25, 2013. (AP Photo/Lalo Villar, File)

MADRID (AP) — A trial opened Wednesday in Spain over a 2013 train derailment that killed 80 passengers and injured 145 others, amid tensions at the court entrance between victims and one of the defendants.

The driver of the long-distance train that crashed against a concrete wall near Spain’s northwestern city of Santiago de Compostela and a former railway security director are accused of professional negligence.

Cortabitarte entered the court through a back door to avoid facing reporters and victims of the crash demonstrating in the front of the building. A protester punched him in the bank when Cortabitarte later left through the front door of the court.

An investigation of the July 24, 2013 derailment showed the train was traveling 179 kph (111 mph) on a stretch with an 80 kph (50 mph) speed limit when it left the tracks. The probe also revealed the driver answered a phone call from the conductor just seconds before the crash.

The driver’s lawyer, Manuel Prieto, told reporters Wednesday that missing signposts on the stretch of railway line where the accident occurred and other inadequate safety measures triggered the derailment, not the phone call.

ADIF confirmed days after the crash that an automatic braking program was installed on most of the track leading from Madrid north to Santiago de Compostela but the coverage stopped 5 kilometers (3 miles) south of the accident site, placing a greater burden on the driver.

A group representing victims of the crash, the Alvia 04155 Victims Platform, said it expected the trial to show that ADIF bore more responsibility for the derailment than the driver.

“The only way, unfortunately, for it not to happen again is for ADIF to be convicted,” platform spokesman Jesús Dominguez told the La Voz de Galicia newspaper.

The association also said it had taken too long for the case to come to trial.

“Some of the victims and relatives have died over the years. For them, there will never be justice and unfortunately nothing can be done,” the group said in a statement reported by Spanish state news agency EFE.

The trial is expected to last several months and feature 669 witnesses.

Spain records hottest year ever in 2022