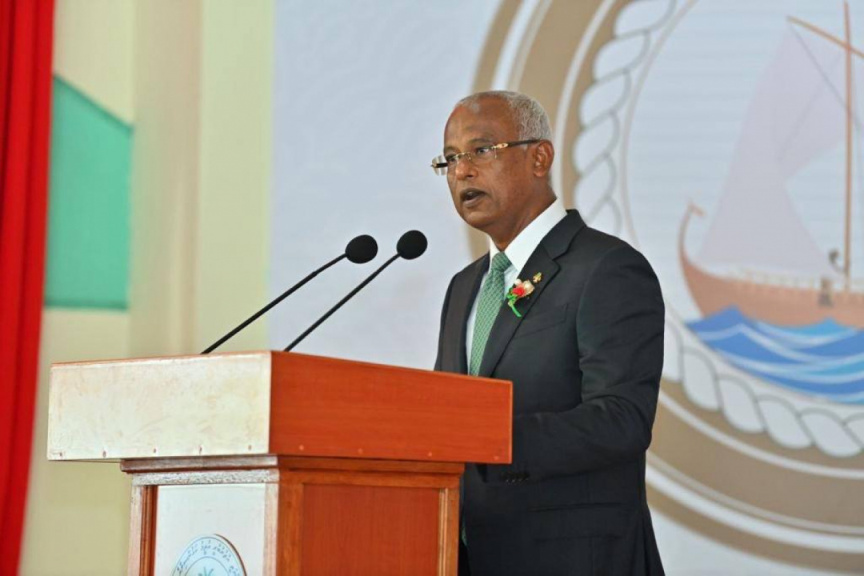 He made the remarks while addressing the special gathering held in Ha. Utheem in celebration of the National Day of Maldives.

Noting that hosting this year’s celebration in Utheem was happiness for all Maldivians, the President added that the continued celebration of this day was owed to all the officers of the defence forces.

Speaking in this regard, he stated that the officers should take Bodu Thakurufaanu as their role model, as he was the permanent Command in Chief for Maldives.

“That is the forever symbol of the independence and sovereignty of Maldives. The true defence of Islam and the people of Maldives are your steadfast walls of protection.”

He also said that Muhammad Thakurufaanu was the most precious soldier of Maldives, and in him, the island of Utheem has given the biggest gift to Maldives that any island or atoll could ever give.

Furthermore, the President noted that although most often when speaking about Bodu Thakurufaanu, people presume him to be older, in fact, he was a youth, who believed that Maldivians could retaliate to the attacks of Portuguese.

Deliberating on the events of then, President Solih said that having built the vessel ‘Kalhuohfunni’ with techniques that were total opposite to what Maldivians have been practising in order to attain speed was no small thinking.

In addition to this, the President spoke about the hard work with which our ancestors have carried and handed over nationalism to the people of today. He added that although we commonly import any and everything we need, nationalism was not something that we could gain in the same manner.

“Nationalism is a responsibility handed over to us by our ancestors.”

“Our language, history, culture, and traditions as well as our values and discipline is a part of nationalism.”

He said that Maldivians have one race, one history to them, and added that the country is one that sacrifices all for Islam. Moreover, the people are interlinked in a way that they help one another carry out their hardships.

Stating that we are making 50 years of tourism, the president said that had Maldivians not been such kind and caring people, the nation would not have become the most popular destination in the world.

The ways outlined by Bodu Thakurufaanu dictate being hospitable and treating guests with kindness and respect, said President Solih.

Furthermore, he expressed that Bodu Thakurufaanu prioritizing diplomacy on various issues was also a part of nationalism.

“Maintaining the features of this nationalism was a factor in maintaining independence. In a globalizing world, turning away from the world and isolating is an obstacle against independence and oneness.”

He said that all the different social issues surfacing today were related to the narrowing relationship with the features of nationalism. He also said that making way for drug trade and tabulating the seas that were once calmed by Bodu Thakurufaanu was not Maldivian nationalism.

The President described Islam as the strongest pillar of Maldivian nationalism. He noted that terrorism was not something familiar to Maldivians and that we prefer to live in harmony and peace with the rest of the world.

Ensuring an easy island lifestyle for all islands, irrespective of the size of the population will revive the nationalism that existed in Maldives in the past, he said.

“It is not an option for the government to stop the work that began to chop up a pathway towards creating a fast and easy path for people to access healthcare, education, and employment.

“I want the cooperation and support of all beloved Maldivian people for this,” he said.

President Solih said the Maldivian people must understand where they come from and how they lived, and must preserve and protect the history, culture and artefacts.

Saying this standing in Utheem, I must note many of the rich historical artefacts in this island were neglected and no longer exist, he said.

President Solih said that he could say that no historical artefact or landmark that represents Maldives’ nationalism exists anymore, other than the Utheem Palace.

“We got our hands on the Kalhuvakaru Mosque with a lot of hard work. The Usgekolhu that was in Sultan’s Park is on that list. The historical sites in Male’ all fell into ruin and were lost,” he said.

President Solih said the historical sites across Maldives must be protected and preserved for the future of the country, and that his administration had begun that work with specific policies.

Additionally, he spoke about how Maldives needed to keep in step with the world, he said that the thinking, hopes and needs vastly differ. But staying on the right pathway for anyone depends entirely on the education and skills they have.

“Providing adequate healthcare and complete education is done for nationalism. Tomorrow’s Maldives will not be bright without the capable and responsible children of today.”

He reiterated that the biggest service for the nation was to parent and send out to the world a righteous child.