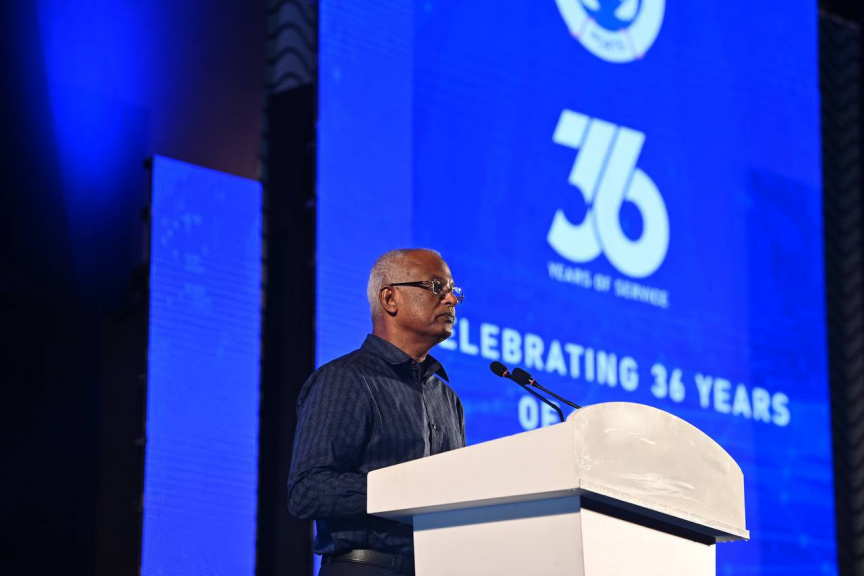 President Ibrahim Mohamed Solih on Saturday said that commercial ports were the cornerstones of most economic activities in every country while stating their significance to the economy.

He made this statement while speaking at the function held to celebrate the 36th anniversary of Maldives Ports Limited (MPL).

The administration is undertaking numerous efforts to develop ports across the country to diversify and boost economic activity.

Speaking on the administration's efforts to develop ports across the country to diversity and boost economic activity, the President noted that the completion of port expansion projects in Kulhudhuffushi City and Hithadhoo,  Addu City will aid goods movement and distribution of freight in those regions.

He also added that a port development project is underway on Thinadhoo in the Gaafu Dhaalu Atoll.

Furthermore, he shared the administration’s most recent efforts to resolve space constraints affecting the Malé Commercial Harbour operations, revealing that land reclamation as part of the port relocation project to Gulhifalhu has been partially completed.

Stating that the services of MPL will be strengthened and expedited with the relocation of the Malé Commercial Harbour, in addition to the north and south harbours to Gulhifalhu, President Solih said that warehouses in Malé will also be relocated to Gulhifalhu as part of the project.

He said that with the port relocation, industrial activities in Male' would decrease, and ease up congestion, allowing the land to be repurposed.

Speaking further, the President extended his gratitude to the dedicated and hardworking staff of MPL.

He said that the government held discussions with the management of MPL regarding the staff’s concerns about the MPL housing project and that he expected a favourable resolution.

Moreover, the President expressed hope for the success of the administration's efforts to expedite economic growth, diversify the economy, and increase the wealth and prosperity of the nation.

During the ceremony, the President also presented long service awards to 12 staff of MPL and received a model of the port as a token of appreciation.

The ceremony also featured the launch of the port community fund, job portal, staff mobile application and the presentation of scholarships.