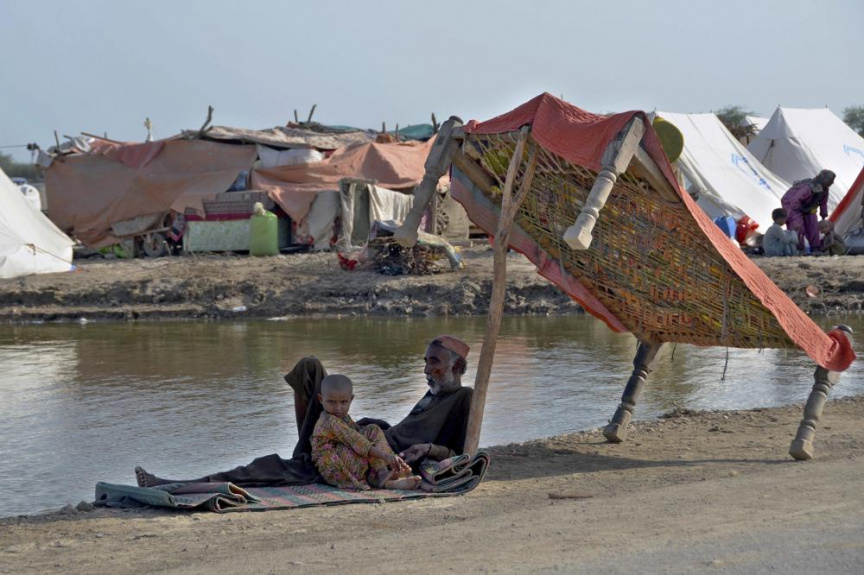 Flood victims sit under the shadow of a cot while they refuge on a roadside, in, Jaffarabad, a district of southwestern Baluchistan province, Pakistan, Monday, Sept. 19, 2022. (AP Photo/Zahid Hussain)

ISLAMABAD (AP) — Devastating floods in Pakistan’s worst-hit province have killed 10 more people in the past day, including four children, officials said Wednesday as the U.N. children’s agency renewed its appeal for $39 million to help the most vulnerable flood victims.

Only a third of the sum in the funding appeal has been met so far, UNICEF said in a statement. Pakistani doctors and medical workers are struggling to contain the outbreak of waterborne diseases, malaria, and dengue fever among hundreds of thousands of survivors now living in tents in southern Sindh province.

The unprecedented monsoon rains and flooding, which many experts attribute to climate change, have affected 33 million people and killed as many as 1,569 people across the country since mid-June.

Of that number, 701 people — including 293 children and 131 women — have died in Sindh, where many areas remain submerged. Hollywood actress and U.N. humanitarian Angelina Jolie made a surprise visit to Sindh on Tuesday, meeting with some of the flood victims.

UNICEF said more than 3.4 million children have been uprooted from their homes and the floodwaters have claimed the lives of more than 550 children across Pakistan.

“Without a significant surge in support, we fear many more children will lose their lives,” UNICEF said in a statement.

In Sindh, many of the roads and bridges have been washed away or are badly damaged, and thousands of families remain cut off and desperately need support. “Families have no food, safe water or medicines,” the agency said.

UNICEF has set up 71 mobile health camps and temporary schools for children in the flood-affected areas. But its $39 million appeal is still less than a third funded, UNICEF added. That sum is part of U.N.’s flash appeal for $160 million to support Pakistan’s flood response.

Meanwhile, Pakistani Prime Minister Shahbaz Sharif met with world leaders on the sidelines of the U.N. General Assembly, seeking more help from the international community to tackle the record-breaking floods.

In a televised message from New York, Sharif on Wednesday urged philanthropists to urgently and generously donate baby food for children affected by the floods. “God will reward you for this noble work,” he said.

Pakistan’s infrastructure and agriculture have also been decimated, raising concerns for a looming food crisis. Authorities say the damage caused by the floods amounts to at least $30 billion.