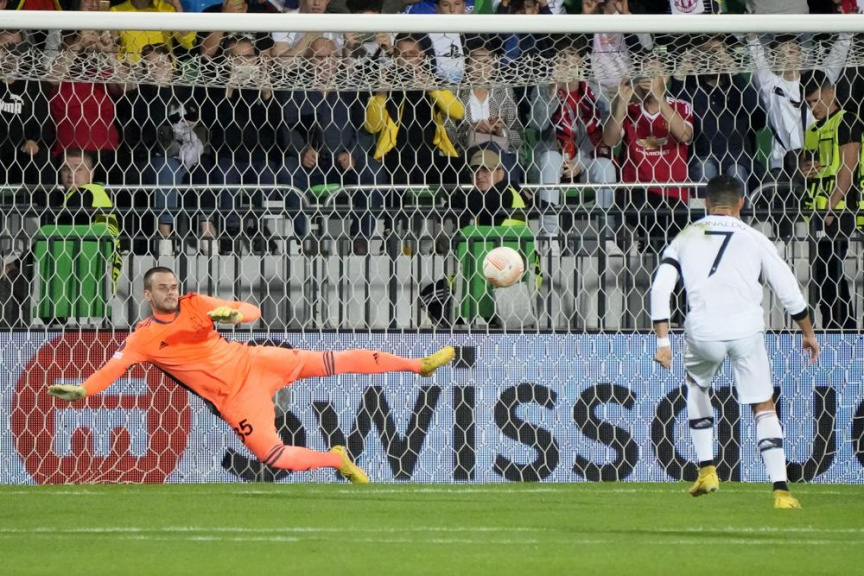 Cristiano Ronaldo scored the first Europa League goal of his career to help Manchester United rebound from an opening loss in the second-tier competition with a 2-0 victory over Sheriff Tiraspol on Thursday.

The Champions League record scorer converted from the spot after Jadon Sancho gave United a 1-0 lead in Moldova. It was the 37-year-old Ronaldo’s first goal of the season and 699th in club competition.

After failing to secure a transfer to a club in the Champions League — where he’s scored 141 goals — the Portugal striker had to settle for playing in the Europa League for the first time since 2002 with Sporting Lisbon.

Ronaldo was given a second straight start, including last week’s 1-0 loss to Real Sociedad at Old Trafford, after he was used as a substitute in four straight wins by United in the Premier League.

Arsenal, another favorite of the competition, had its game against PSV Eindhoven postponed from Thursday to Oct. 20 because of limited police resources in London during preparations for the queen’s state funeral.

Though Chelsea’s Champions League game against Salzburg went ahead Wednesday, the visit of a large group of PSV fans traveling from the Netherlands proved more challenging.

Feyenoord recorded its first win by routing Sturm Graz 6-0, Freiburg won 3-0 at Olympiacos for its second victory, and Monaco was upset 1-0 at home by Hungary’s Ferencváros.

West Ham is struggling in the Premier League but shining in the Europa Conference League. The London club beat Denmark’s Silkeborg 3-2 for its second victory from two in Europe’s third-tier competition.

Villarreal followed suit with a 2-1 win at Hapoel Be’er Sheva and Istanbul Başakşehir kept a perfect record after a 3-0 victory over Fiorentina.

Sancho put United 1-0 ahead in the 17th after collecting a pass from Christian Eriksen at the edge of the area.

The game was moved from the tiny Sheriff Stadium in its breakaway home region of Transnistria that borders Ukraine after UEFA blocked Sheriff from playing there this season following Russia’s invasion of Ukraine.

It took place in the Moldovan capital, Chisinau, in the center of the country, at the Zimbru Stadium.

Alireza Jahanbakhsh scored twice for Feyenoord in Group F to jump to a 4-0 after the first half. The Iranian forward had his third disallowed after a video review.

Dávid Hancko, Danilo Pereira, Santiago Gimenez and Oussama Idrissi also scored for the Dutch club to recover from a 4-2 defeat at Lazio in the previous round.

Michael Gregoritsch scored twice for Freiburg to move to six points in Group G where Qarabağ blanked Nantes 3-0 in Baku.

Luiz Henrique, Joaquín and Sergio Canales netted one apiece for Real Betis to lead Group C with six points. At 41 years and 56 days, Joaquín becomes the oldest goalscorer in the competition history.

Substitute Paolo Dybala and Lorenzo Pellegrini score a goal each in the span of two minutes early in the second half before Andrea Belotti added the third for Roma’s first win in the same group.

Helsinki captain Miro Tenho was sent off 13 minutes into the game at Stadio Olimpico after a foul on Belotti.

West Ham rallied after Silkeborg took an early 1-0 lead through Kasper Kusk. Manuel Lanzini equalized from the penalty spot before Gianluca Scamacca and Craig Dawson established a comfortable 3-1 advantage still in the first half. Søren Tengstedt scored in the second half but it wasn’t enough and West Ham is in control of Group B with six points.

Serdar Gürler had two goals and substitute Bertrand Traoré added one for Başakşehir to lead Group A with six points. Hearts won 2-0 at Latvian champion RFS to place second with three. Fiorentina and RFS have a point each.

Slavia Prague, whose stadium will host the final in May, twice came back from a goal down before Lukáš Masopust scored the winner in a 3-2 victory over Ballkani, the first team from Kosovo to reach a UEFA competition group stage.

Slavia is tied atop Group G with Sivasspor after the Turkish team won 1-0 at Cluj.

Arsenal wins at Zurich, Man U beaten in Europa League

Federer says he is retiring from pro tennis at age 41