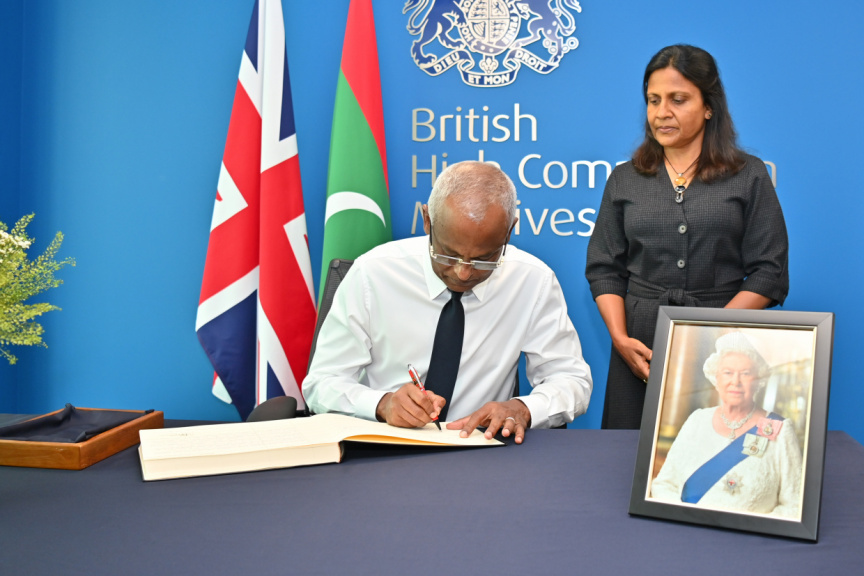 The first couple, on Wednesday, signed the book of condolence opened at British High Commission in the Maldives, in memory of the late Queen Elizabeth II; their joint message underscoring the late Queen’s tireless work through the Commonwealth to give equal representation to smaller nations like the Maldives.

Late Queen Elizabeth, the longest-reining British monarch whose rule spanned over seven decades, passed away on last Thursday, at the age of 96.

In their joint message, the first couple described Her Majesty's long and distinguished reign as the finest example of loyalty to duty, sacrifice, and selfless service, as well as the love for her people. They stressed that she served the UK, the Commonwealth, and the wider international community with the utmost dignity and dedication.

Apart from this, the late Queen’s exalted place with the Maldivians was underscored in their message, detailing many still fondly remembered her visit to the island nation from fifty years ago. The first couple explained that Maldivians held her in the highest regard by referring to her with the singular word ‘Raanee’, which means Queen, as she was unique in her eminence, and in her tireless work through the Commonwealth to give equal representation to smaller nations like the Maldives.

Asif sentenced to 10 years in jail for stabbing Hammadh