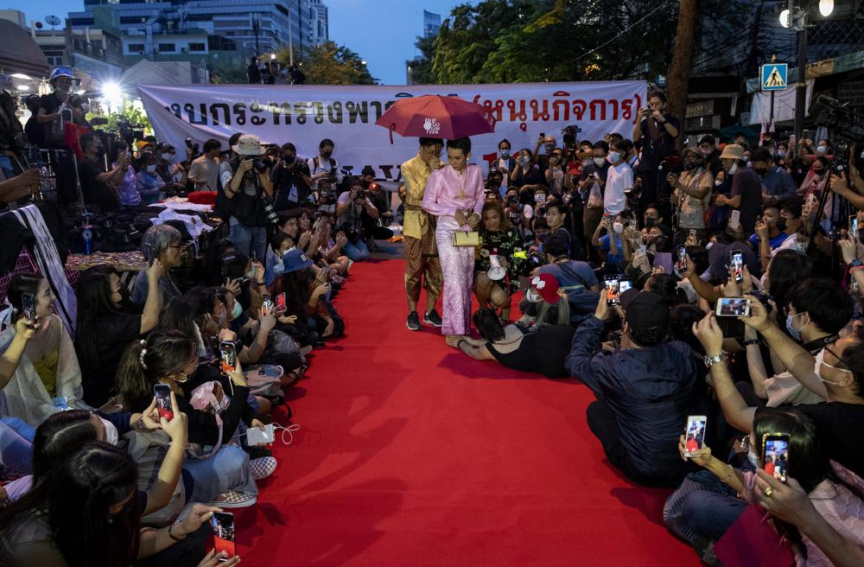 Pro-democracy protesters perform on a mock "red carpet" fashion show billed as a sort of counterpoint to a fashion show being held by one of the monarchy's princesses nearby in Bangkok, Thailand on Oct. 29, 2020. (AP Photo/Gemunu Amarasinghe)

BANGKOK (AP) — A court in Thailand on Monday sentenced an activist to two years in prison for allegedly insulting the country’s queen by wearing traditional Thai attire at a demonstration for reform of the monarchy two years ago, a legal aid group said.

Jatuporn “New” Saeoueng wore a pink dress while a fellow protester held an umbrella over her as she walked down a red carpet at a mock fashion show held in the street in downtown Bangkok on Oct. 29, 2020.

The rally was billed as a counterpoint to a fashion show being held by Princess Sirivannavari Nariratana, a daughter of King Maha Vajiralongkorn.

Vajiralongkorn’s wife, Queen Suthida, dresses in elegant silk fashions for formal and public occasions. Members of the royal family have attendants often holding ceremonial umbrellas over them on such occasions.

The group Thai Lawyers for Human Rights said Bangkok’s Criminal Court initially sentenced Jatuporn to three years’ imprisonment for violating the lese majeste law — which makes defaming the monarch or his immediate family punishable by a prison term of three to 15 years per offense — and the Public Safety Act. She was also fined 1,000 baht ($27.50). The sentence was immediately reduced to two years.

Jatuporn was sent to the Central Women’s Correctional Institution pending another court’s ruling on her request to be freed on bail.

The protest was one in a series in 2020-2021 that originally demanded political changes, including new elections and a more democratic constitution, but expanded to call for reform of the monarchy.

Protesters charged that King Vajiralongkorn wields an inordinate amount of power in what is nominally a democracy under a constitutional monarchy. The monarchy has long been considered an untouchable institution, revered by a large part of the population.

The protest movement later lost momentum due to controls imposed to fight the coronavirus pandemic and a government legal offense against protest leaders.

According to Thai Lawyers for Human Rights, since November 2020 there have been 210 people charged with a total of 229 violations of the lese majeste law. Thirteen cases have come to trial, and charges were dismissed in three of them.

Jatuporn, who faces six more charges related to her protest activities, said she would appeal her case all the way up to the Supreme Court if necessary.

“The mock fashion show was a satirical take on the political situation of the country – a peaceful public event akin to a street festival with music, food and dancing,” Kyle Ward, deputy secretary general of the human rights group Amnesty International, said in an emailed statement. “Participants should not be punished for participating in a peaceful assembly.

“We urge the authorities to immediately drop all charges against those who have merely exercised their human rights to freedom of expression and peaceful assembly, and release those arbitrarily detained.

Fire at music pub in eastern Thailand kills at least 13