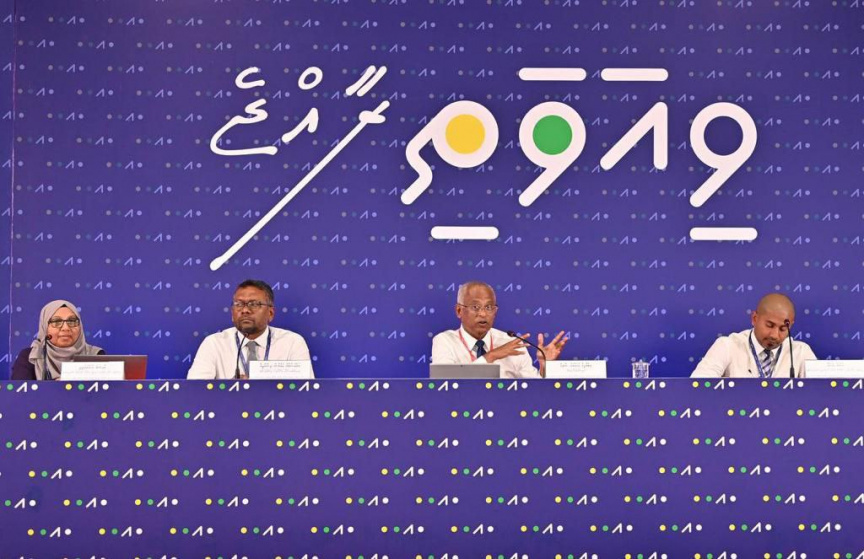 President and some of the state ministers participating in a penal discussion as part of Viyavathi Conference. (Photo / President's Office)

President Ibrahim Mohamed Solih on Sunday said that increasing the number of women in executive roles, even more than now, was a goal for the government.

He made this statement while speaking during the first session of the third edition of the Viavathi Raajje conference in L. Gan.

President Solih acted as a host for a penal discussion that centred on gender equality.

During this discussion, he said that empowering women in the political, economic, and social arena, and providing them with equal opportunities was one important policy that is currently being enforced as well.

He noted that the gender equality action plan compiled by the administration was in an effort to provide equal opportunities for women in all sectors.

Additionally, the President emphasised the administration's efforts thus far to achieve this goal, stating that women's involvement in decision-making had increased.

He revealed that female ministers account for 33 percent of the current cabinet, while the male-female ratio of ambassadors in the Maldives was 50-50, and that allocating one-third of council seats to women resulted in 39.8 percent female representation in the island councils.

Furthermore, he reiterated that the aim is to further increase the number of women in positions of leadership and policymaking.

During the session, Gender Minister informed participants of the government's efforts to achieve gender equality in the country. Participants were also given the opportunity to discuss with the panel the issues highlighted during the "Funoala Dharubaaru," which took place prior to the conference.

Over 270 individuals are participating in the Viavathi Raajje conference, along with 107 council members and Women’s Development Committee (WDC) representatives. The upcoming session of the conference will be focused on the formulation of land use plans.