Nasheed questions if amendment to Tourism Act can be legalized 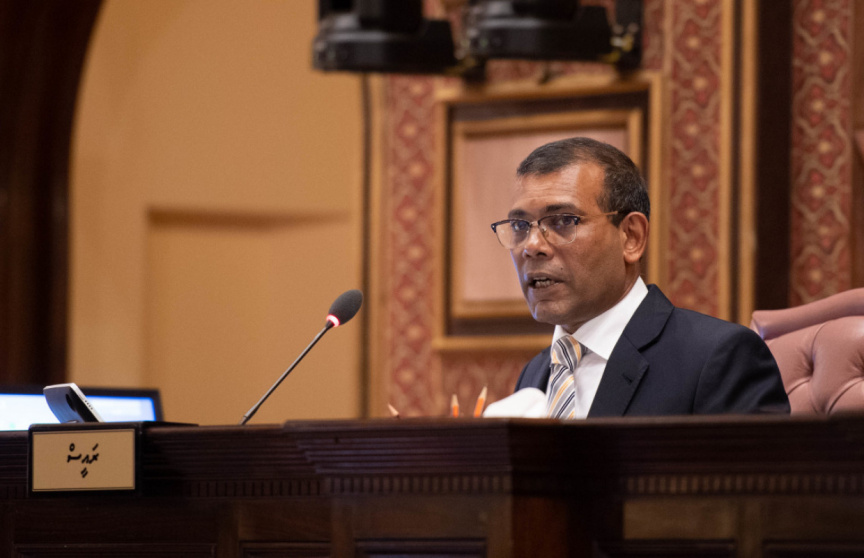 Speaker of the Parliament Mohamed Nasheed: Speaker Nasheed stated that forming a Parliamentary Commission to investigate the MMPRC scandal was unnecessary while the Presidential Commission was already investigating the scandal in response to a letter suggesting so by Kaashidhoo MP Jabir on November 5, 2019. (Photo/Parliament)

Speaker of Parliament and former President Mohamed Nasheed on Monday questioned whether an amendment proposed to the Tourism Act in order to resume Green Tax can be incorporated into the constitutionalized.

The amendment to the Act’s Article 35 (g) states that Green Tax will be enforced upon tourist resorts, hotels, tourist vessels, and guesthouses starting from next year’s January.

The amendment was passed by the Parliament at the 22nd sitting of its second session for the year held on June 30. President Ibrahim Mohamed Solih ratified the amendment on July 4.

The aim of this amendment was to mandate Green Tax upon hotels and guesthouses similar to resorts.

However, the government has called to collect taxes from tourist establishments.

Thinadhoo South MP Abdulla Saneef proposed a bill on behalf of the government which stated during the time when Green Taxi is not collected, if any funds were taken as tax, they should be given to the government if not returned to the establishment.

Speaking about this, Speaker Nasheed said that as per Article 59 of the Constitution, an action that is currently not declared illegal, is not punishable by a law created later on.

“As I see it, in the bill submitted, you are proposing to make a law to change something that has already been done. This cannot be included in the bill.”

From establishments with over 50 rooms, Green Tax is taken at the rate of six USD daily for every single day a guest stayed. For places with rooms less than this, the rate is three USD.

'Tax hike bill passed with a small difference in votes'