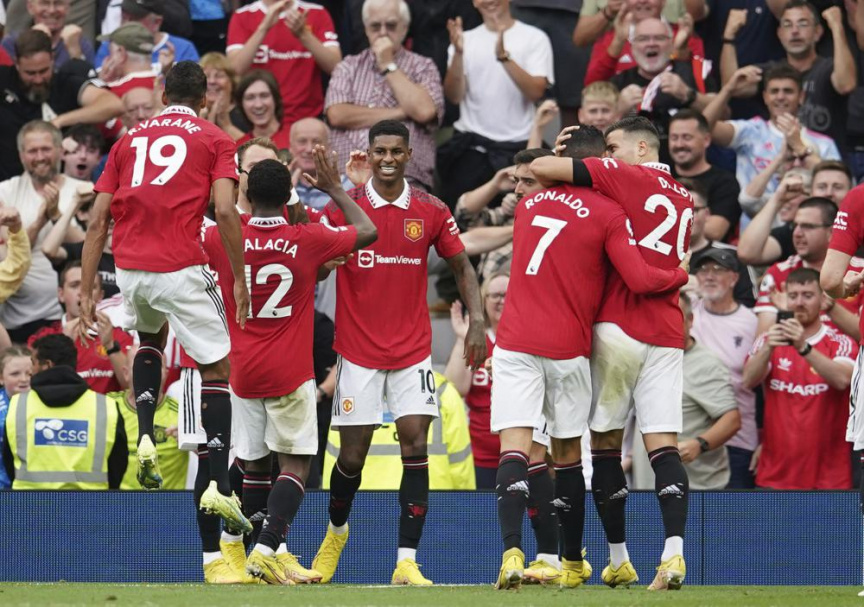 Deadline-day signing Antony was handed a start after only joining on Thursday and took just 35 minutes to score his first goal, the $95 million arrival from Ajax coolly dispatching a left-footed effort.

By that time, Arsenal winger Gabriel Martinelli had had a goal ruled out after the VAR advised referee Paul Tierney to review Martin Odegaard’s challenge on Christian Eriksen in the buildup.

Arsenal started the second half strongly and equalized through Bukayo Saka, only for United to strike back as Rashford was sent racing through to score by a brilliant through ball from Bruno Fernandes.

The 24-year-old Rashford grabbed his second after Eriksen teed him up in the 75th minute as United won four consecutive Premier League games for the first time since April 2021.

Arsenal’s run of five straight games to open the season came to an end but the visitors dominated large spells at Old Trafford, suggesting they can challenge for a top-four place this season.

The atmosphere was rocking at Old Trafford and play got off to a lively start to a backdrop of anti-Glazer ownership chants that persisted throughout.

Eriksen volleyed narrowly wide at the far post having met a deep cross from Diogo Dalot, while at the other end William Saliba wasted a good chance when the ball fell to him inside the box.

Jadon Sancho followed some quick footwork with a low drive that Arsenal goalkeeper Aaron Ramsdale kept out and a frantic opening reached a crescendo in the 12th.

But Arsenal’s celebrations were brought to a halt by the VAR, with the referee ultimately ruling the goal out after going to the pitchside monitor and deeming Odegaard to have fouled Eriksen.

Antony wastefully bent wide from distance as play became broken up by fouls and periods of treatment before Arsenal had some decent chances.

Martinelli got away a low attempt from an acute angle that De Gea stopped from creeping in at the near post, then soon after produced a superb save to prevent him heading home.

Those stops provided United with the platform to take the lead.

Eriksen played through the lines to Fernandes and the referee played advantage as the Portuguese passed onto Sancho before being fouled by Gabriel.

The winger fed Rashford, whose delicate pass put Antony in to curl a left-footed strike past Ramsdale. The new boy made the most of the celebrations.

There were a few half-chances as halftime approached before Arsenal returned from the break with renewed intensity.

Gabriel Jesus found Odegaard with a cross from which he could not make a clean connection and Saka rifled across the face of goal as the visitors worked another opening. Tyrell Malacia’s attempt to stop the latter ended in penalty appeals that were ignored.

Saka’s floated cross then landed on the crossbar as United remained under pressure.

Cristiano Ronaldo came on for Antony but in the 60th minute, Arsenal’s pressure told.

Having intercepted the ball, the Gunners quickly launched an attack. Odegaard slipped in Jesus, with Dalot’s tackle on him inadvertently putting the ball into Saka’s path to strike.

It was no less than the league leaders deserved at that time but they were only level for six minutes.

United picked up a loose pass and launched a break, with Fernandes’ excellent ball putting Rashford through to hit a drive that beat Ramsdale and rippled the back of the net in front of the Stretford End.

The Arsenal goalkeeper batted away Fernandes’ chip and, after Jesus went close at the other end, was picking the ball out of his net again in the 75th minute.

Fernandes superbly capitalized on the visitors’ high line with a pass that put Eriksen free. The experienced midfielder squared the ball for Rashford to score his second.

United moved up to fifth place, three points behind Arsenal.

Garnacho gives United 2-1 win at Fulham ahead of WCup