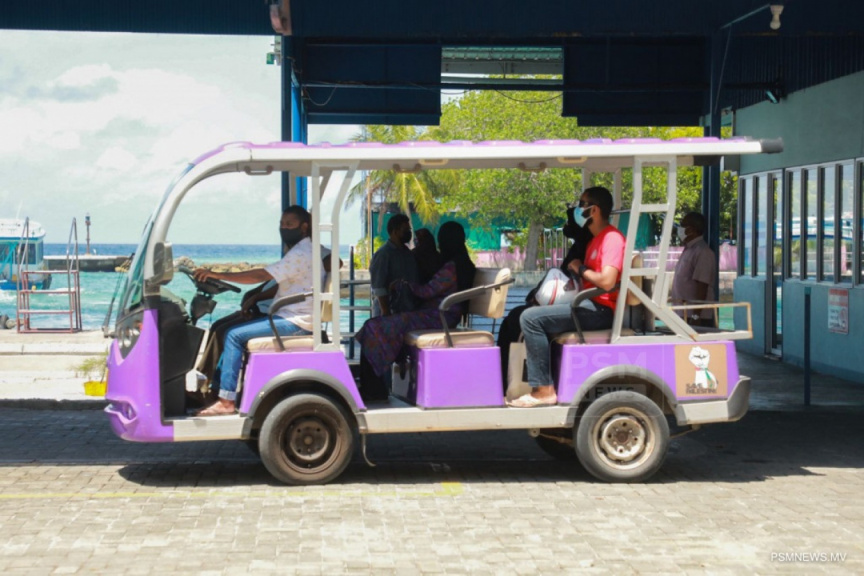 Passengers board a buggy at the Vilimale' Ferry Terminal.

Subsequent to 99 Holdings’ failure to provide buggy service in Vilimale’ in line with the agreement executed – Male’ City Council, on Wednesday, has passed to nullify the agreement and take over the provision of the service.

The proposal was put forth by Male’ City Council’s Vilimale’ constituency member Fathimath Nahula at a time internal transportation within the island has become a pertinent issue for its residents.

The proposal by Nahula was passed in the 63rd general meeting of Male’ City Council’s fourth session with the unanimous vote of all members in attendance.

99 Holdings was given a deadline till March 26, to resume provision of buggy service in Vilimale’ in line with the agreement executed with the City Council after days of the service being halted.

Speaking to Sun regarding the matter, Nahula said that several meetings had been held with 99 Holdings, and repeated written notice had been served to the company despite which there was no change.

She detailed that a situation had arisen last week, which required the transportation of a person with special needs to Male’ City from Vilmale’. Stressing that an ambulance nor a vehicle was available at that time – Nahula said the person was taken to the ferry terminal on a wheelbarrow as a result.

“This is a repeated complaint being received to date from Vilimale’ residents. The ineffective internal transportation system. Absence of vehicles. People have no way to go to the ferry terminal because of the absence of vehicles. Sick patients and pregnant women have been transported on wheelbarrows in emergency cases previously,” she had said.

99 Holdings have stated last year that buggy service in Vilimale’ has been halted due to a technical issue to their batteries. The company said that import of battery was delayed back then as many countries had their borders closed due to the COVID-19 pandemic.