A year on, ex-Afghan leader defends role in Taliban takeover 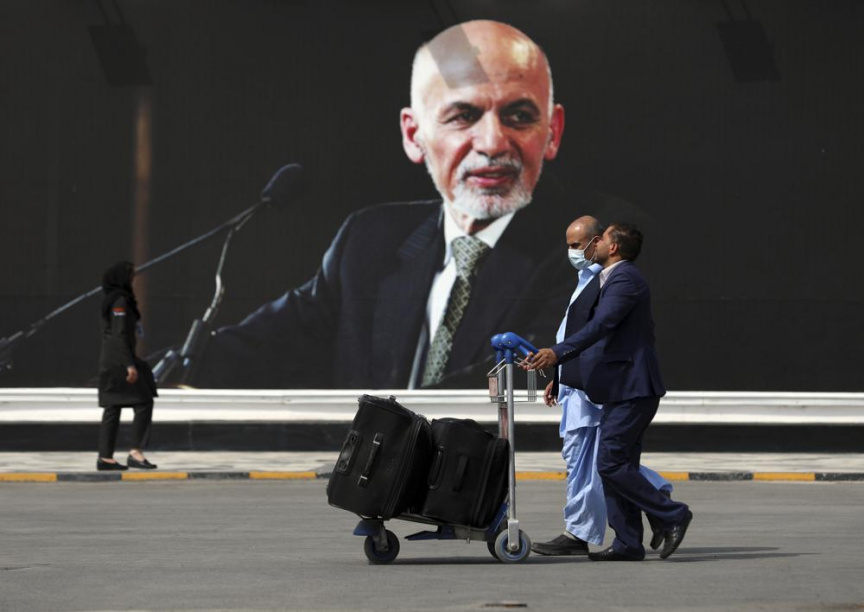 Passengers walk to the departures terminal of Hamid Karzai International Airport in Kabul, Afghanistan, on Saturday, Aug. 14, 2021, past a mural of President Ashraf Ghani, as the Taliban offensive encircled the capital. (AP Photo/Rahmat Gul, File)

ISLAMABAD (AP) — On the eve of the anniversary of the Taliban takeover of Kabul, Afghanistan’s former president on Sunday defended what he said was a split-second decision to flee, saying he wanted to avoid the humiliation of surrender to the insurgents.

Ashraf Ghani also told CNN that on the morning of Aug. 15, 2021, with the Taliban at the gates of the Afghan capital, he was the last one at the presidential palace after his guards had disappeared. He said the defense minister told him earlier that day that Kabul could not be defended.

Ghani had previously sought to justify his actions on the day Kabul fell, but offered more details Sunday. He alleged that one of the cooks in the palace had been offered $100,000 to poison him and that he felt his immediate environment was no longer safe.

“The reason I left was because I did not want to give the Taliban and their supporters the pleasure of yet again humiliating an Afghan president and making him sign over the legitimacy of the government,” he said. “I have never been afraid.”

Critics say Ghani’s sudden and secret departure Aug. 15 left the city rudderless as U.S. and NATO forces were in the final stages of their chaotic withdrawal from the country after 20 years.

Ghani also denied persistent allegations that he took tens of millions of dollars in cash with him as he and other officials fled in helicopters.

In a report issued last week, a Congressional watchdog said it’s unlikely Ghani and his senior advisers transported that much cash on the escape helicopters.

“The hurried nature of their departure, the emphasis on passengers over cargo, the payload and performance limitations of the helicopters, and the consistent alignment in detailed accounts from witnesses on the ground and in the air all suggest that there was little more than $500,000 in cash on board the helicopters,” wrote the Office of the Special Inspector General for Afghanistan Reconstruction, which has tried to monitor the massive U.S. spending in the country over the years.

The agency added that “it remains a strong possibility that significant amounts of U.S. currency disappeared from Afghan government property in the chaos of the Taliban takeover, including millions from the presidential palace” and the vault of the National Directorate of Security. However, the report said the watchdog was unable to determine how much money was stolen and by whom.

In the end, the Taliban seized the capital without significant fighting last August, capping a weeks-long military blitz in which they rapidly captured provincial capitals without much resistance from the increasingly demoralized Afghan security forces.

In the year since the takeover, the former insurgents have imposed significant restrictions on girls and women, limiting their access to education and work, despite initial promises to the contrary. The Taliban have remained internationally isolated and largely cut off from the flow of international aid enjoyed by the Ghani government. The Taliban have struggled to govern and halt the sharp economic decline that has pushed millions more Afghans into poverty and even hunger.

Despite those challenges, the Taliban-led government planned several events Monday to mark the anniversary, including speeches by Taliban officials and several sports events.