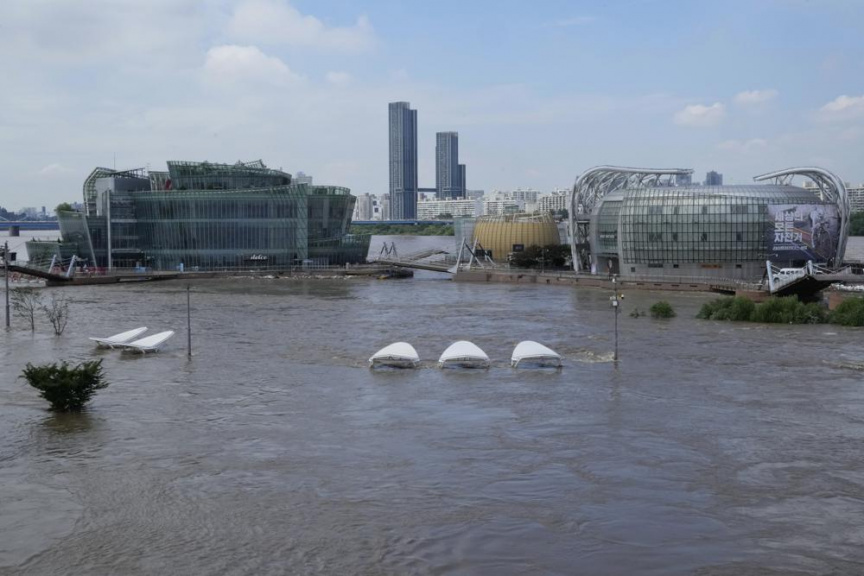 A part of a park along the Han River are flooded due to heavy rain in Seoul, South Korea, Wednesday, Aug. 10, 2022. (AP Photo/Ahn Young-joon)

South Korea’s weather agency lifted heavy rain warnings for Seoul and neighboring metropolitan areas, but forecast 10 to 30 centimeters (4 to 12 inches) of rain in the country’s southern regions through Thursday.

Seven people remained missing in Seoul and nearby Gyeonggi province following the heavy rains that swamped the region on Monday and Tuesday, turning streets into car-clogged rivers, sending floods cascading into subway stations and triggering landslides that crashed into roads and buildings. More than 4,000 people were displaced from their homes, including around 2,000 residents of an apartment complex in Seoul who evacuated Wednesday following a power outage caused by flooding.

The 10 confirmed fatalities included a family of three — two sisters in their 40s and a 13-year-old girl — who called rescue workers for help before drowning in their semi-basement home in southern Seoul. Their deaths triggered an outpouring of public grief and prompted the city government to announce Wednesday that it would no longer permit such homes for residential purposes.

South Korean President Yoon Suk Yeol apologized at a disaster response meeting on behalf of the government for the deaths and disruption caused by the heavy rains. He urged the central government to provide more financial help and personnel assistance to cities and regional governments to speed up recovery efforts.

“It’s certainly true that (the rainfall) was abnormal weather, but we have come to a point where we can no longer call abnormal weather abnormal,” Yoon said. “We could see new record levels (of rain) at any time. We need to build our response so that we are ready for a situation that’s worse than we had imagined.”

The Ministry of the Interior and Safety said workers by Wednesday afternoon had finished restoring more than 90% of about 2,800 buildings, homes, roads and other facilities in the capital area that had been prioritized in emergency recovery plans.

Nearly 3,000 government workers, including police and fire department personnel, and dozens of excavators and dump trucks were deployed in the recovery efforts. The military separately deployed around 1,300 troops, some of whom cleaned debris and salvaged furniture in flooded neighborhoods in southern Seoul.

There were no immediate reports of major damage or casualties in regions south of the capital area, where the weather agency issued heavy rain warnings. Landslide warnings were issued in more than 30 cities and towns across the country,

More than 52 centimeters (20 inches) of rain was measured in Seoul’s hardest-hit Dongjak district from Monday to Wednesday at noon. Precipitation in the area exceeded 14 centimeters (5.5 inches) per hour at one point Monday night — the highest hourly downpour measured in Seoul since 1942.