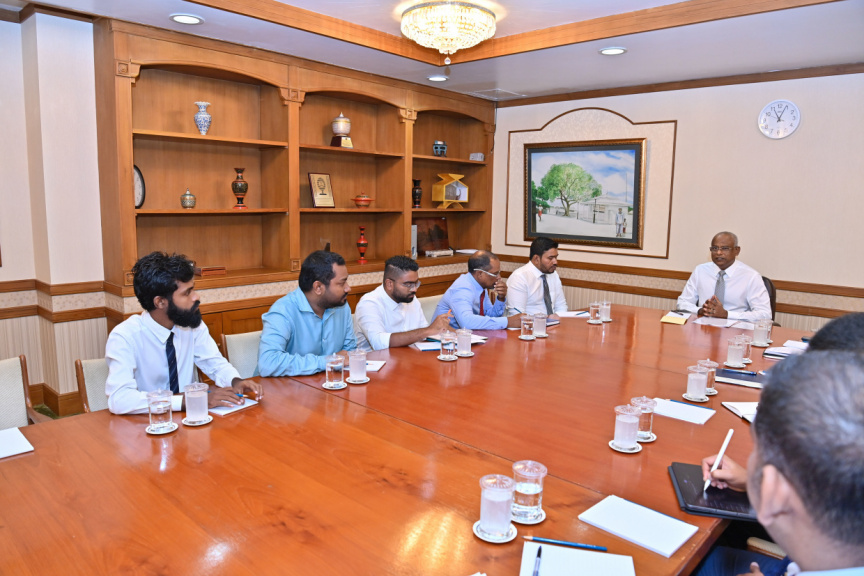 Reps from MJA, Editors Guild meeting with President Solih, AG Riffath and other officials regarding the Evidence Act, on July 31, 2022. (Photo / President's Office)

Maldives Journalist Association (MJA) on Sunday met with President Ibrahim Mohamed Solih and shared their concerns regarding the source disclosure provision in the Evidence Act.

In the meeting held at President’s Office (PO), the exco members of MJA along with the Editors Guild met with President Solih, Attorney General Ibrahim Riffath, Chief of Staff at PO Ali Zahir, and senior officials of PO’s Communication Office.

Journalists shared their views on the circumstances under which the identities of confidential sources and informants must be disclosed under the ratified Evidence Act, as well as the need for certain terminologies to be clarified.

The President assured that the government would not do anything against journalistic freedom, adding that they will continue to support the media just as done in the past years.

With that said, he added that the government was working to maintain peace and ensure the protection of all.

Additionally, after listening to the concerns of journalists, President Solih assured to work on amending the provisions so that the situations which call for source disclosure under terrorism and national security are clearly stated.

He further assured that the input of the media will be taken into consideration when drafting the media bill as well.

Meanwhile, speaking at the meeting AG Riffath noted that there was a six-month grace period before the Evidence Act comes into effect. He went on to explain the rights guaranteed to journalists, the circumstances under which a ruling for the disclosure of an informant can be made, and the procedures by which a judge makes such a ruling.

AG noted that the component on the disclosure of an identity of an informant was drafted in accordance with international best practices and international conventions.

IGMH: We are looking into petition by ER nurses