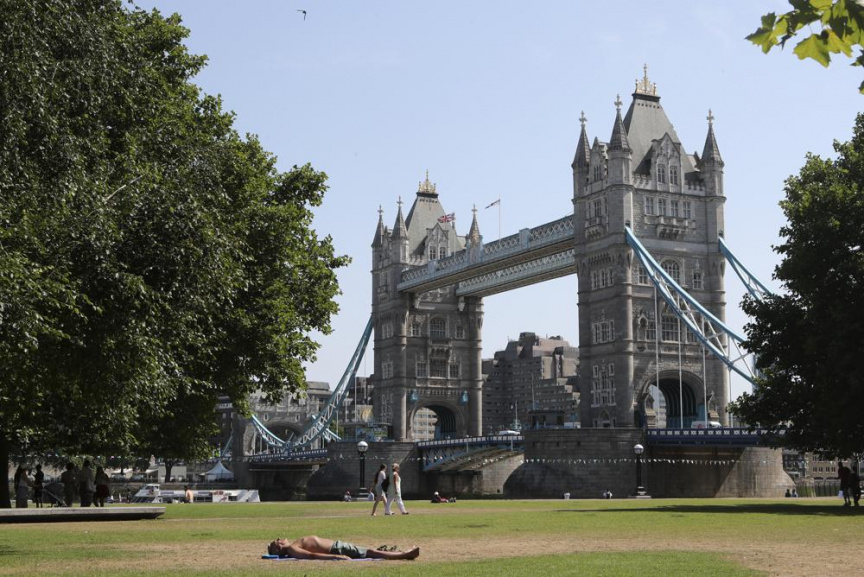 LONDON (AP) — Britain shattered its record for highest temperature ever registered Tuesday amid a heat wave that has seared swaths of Europe, as the U.K.’s national weather forecaster said such highs are now a fact of life in a country ill-prepared for such extremes.

The typically temperate nation was just the latest to be walloped by unusually hot, dry weather that has triggered wildfires from Portugal to the Balkans and led to hundreds of heat-related deaths. Images of flames racing toward a French beach and Britons sweltering — even at the seaside — have driven home concerns about climate change.

The U.K. Met Office weather agency registered a provisional reading of 40.3 degrees Celsius (104.5 degrees Fahrenheit) at Coningsby in eastern England — breaking the record set just hours earlier. Before Tuesday, the highest temperature recorded in Britain was 38.7 C (101.7 F), set in 2019. By later afternoon, 29 places in the UK had broken the record.

As the nation watched with a combination of horror and fascination, Met Office chief scientist Stephen Belcher said such temperatures in Britain were “virtually impossible” without human-driven climate change.

He warned that “we could see temperatures like this every three years” without serious action on carbon emissions.

The sweltering weather has disrupted travel, health care and schools. Many homes, small businesses and even public buildings, including hospitals, in Britain don’t have air conditioning, a reflection of how unusual such heat is in the country better known for rain and mild temperatures.

The intense heat since Monday has damaged the runway at London’s Luton airport, forcing it to shut for several hours, and warped a main road in eastern England, leaving it looking like a “skatepark,” police said. Major train stations were shut or near-empty Tuesday, as trains were canceled or ran at low speeds out of concern rails could buckle.

London faced what Mayor Sadiq Khan called a “huge surge” in fires because of the heat. The London Fire Brigade listed 10 major blazes it was fighting across the city Tuesday, half of them grass fires. Images showed several houses engulfed in flames as smoke billowed from burning fields in Wennington, a village on the eastern outskirts of London.

Sales of fans at one retailer, Asda, increased by 1,300%. Electric fans cooled the traditional mounted troops of the Household Cavalry as they stood guard in central London in heavy ceremonial uniforms. The length of the changing of the guard ceremony at Buckingham Palace was shortened. The capital’s Hyde Park, normally busy with walkers, was eerily quiet — except for the long lines to take a dip in the Serpentine lake.

“I’m going to my office because it is nice and cool,” said geologist Tom Elliott, 31, after taking a swim. “I’m cycling around instead of taking the Tube.’’

Ever the stalwart, Queen Elizabeth II carried on working. The 96-year-old monarch held a virtual audience with new U.S. ambassador Jane Hartley from the safety of Windsor Castle.

A huge chunk of England, from London in the south to Manchester and Leeds in the north, remained under the country’s first “red” warning for extreme heat Tuesday, meaning there is danger of death even for healthy people.

Such dangers could be seen in Britain and across Europe. At least six people were reported to have drowned while trying to cool off in rivers, lakes and reservoirs across the U.K. In Spain and neighboring Portugal, hundreds of heat-related deaths have been reported in the heat wave.

Climate experts warn that global warming has increased the frequency of extreme weather events, with studies showing that the likelihood of temperatures in the U.K. reaching 40 C (104 F) is now 10 times higher than in the pre-industrial era.

The head of the U.N. weather agency expressed hope that the heat gripping Europe would serve as a “wake-up call” for governments to do more on climate change. Other scientists used the milestone moment to underscore that it was time to act.

“While still rare, 40C is now a reality of British summers,” said Friederike Otto, Senior Lecturer in Climate Science at Imperial College London’s Grantham Institute for Climate Change. “Whether it will become a very common occurrence or remains relatively infrequent is in our hands and is determined by when and at what global mean temperature we reach net zero.”

Drought and heat waves tied to climate change have also made wildfires more common and harder to fight.

In the Gironde region of southwestern France, ferocious wildfires continued to spread through tinder-dry pines forests, frustrating firefighting efforts by more than 2,000 firefighters and water-bombing planes.

Tens of thousands of people have been evacuated from homes and summer vacation spots since the fires broke out July 12, Gironde authorities said.

A smaller third fire broke out late Monday in the Medoc wine region north of Bordeaux, further taxing resources. Five camping sites went up in flames in the Atlantic coast beach zone where blazes raged around the Arcachon maritime basin famous for its oysters and resorts.

In Greece, a large forest fire broke out northeast of Athens, fanned by high winds. Fire Service officials said nine firefighting aircraft and four helicopters were deployed to try to stop the flames from reaching inhabited areas on the slopes of Mount Penteli, some 25 kilometers (16 miles) northeast of the capital. Smoke from the fire blanketed part of the city’s skyline.

But weather forecasts offered some consolation, with temperatures expected to ease along the Atlantic seaboard Tuesday and the possibility of rains rolling in late in the day.