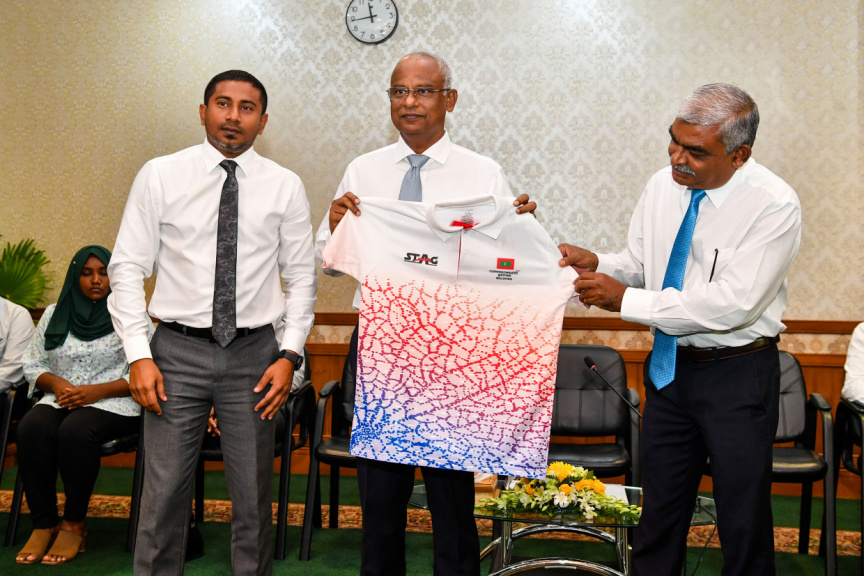 President Ibrahim Mohamed Solih, on Tuesday, has appealed to local athletes to work to their best capacity in securing a good name for the country in international sports tournaments.

President Solih made the appeal during a meeting held with local athletes and officials participating in Commonwealth Games and Islamic Solidarity Games at the President’s Office on Tuesday morning.

Speaking during the meeting, President Solih stressed that only a lucky number of few people are granted the opportunity to represent their country. Therewith, he advised local athletes to keep this high honor they have been granted in their minds, whilst they complete in international sports tournaments.

Apart from this, he underscored that his administration was working ensure training and other necessities required for local athletes in order to secure major wins on international levels. In this regard, he highlighted that the government has undertaken many efforts to further develop sports in the Maldives within the past four years. He added that during this time, the government had worked to provide opportunities for individuals who wanted to play any sports, without bias.

President Solih was presented a jersey titled ‘For the Ocean’ during this meeting. The jersey is a representation of the significant link between Maldivian people’s lives and the ocean. It also showcases the natural beautiful beaches and the organism rich reefs of Maldives.

A total of 46 athletes and officials from Maldives are set to take part Commonwealth Games scheduled to take place in the UK from June 28 to August 8.

Meanwhile, 62 athletes and officials from Maldives are set to take party in 5th Islamic Solidarity Games scheduled to take place at Turkey from August 8 to August 9. The event is organized by Organization of Islamic Corporation (OIC).

Police dispose of 1,318 bottles of alcohol