Diesel lacking for Cuba drivers as fuel used for electricity 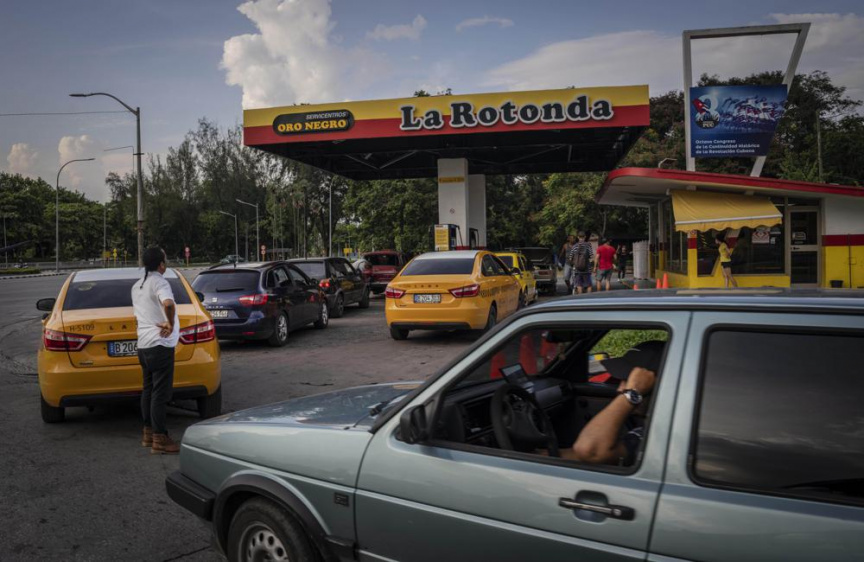 Drivers wait their turn to fuel their vehicles at a gas station in Havana, Cuba, Thursday, July 14, 2022. (AP Photo/Ramon Espinosa)

HAVANA (AP) — Dany Pérez had spent four days in a line of vehicles waiting to fill his truck with diesel he needs for the 900-kilometers (560-mile) trip from Havana to his home in eastern Cuba.

Taxi driver Jhojan Rodríguez had been waiting at another station even longer — it was nearing two weeks — but he was finally near the head of the line of hundreds of vehicles in the Playa district of the capital.

Such lines have become increasingly common in Cuba, where officials apparently have been sending scarce diesel fuel to power generation plants rather than fuel stations for vehicles.

It’s not the first time the island has suffered fuel shortages, but it’s one of worst.

“I have seen pretty bad situations, but not like now,” said the 46-year-old Pérez, who was eating and sleeping in his 1950s-era Chevrolet truck, which he had outfitted to haul some 40 passengers.

Drivers in the lines have tried to organize themselves by creating lists of those waiting and updating them daily as they wait for tanker trucks to arrive with fuel. Because of the lists, those who live nearby can go home for spells — keeping track of any progress via a WhatsApp group.

“I’m a professional taxi driver. ... I pay taxes, social security. I’m legally established,” said Rodríguez, the 37-year-old owner of a gold-and-white 1954 Oldsmobile whose worn-out gasoline engine at some point had been replaced with a diesel. “My home, my family depend on this diesel.”

The car had run out of fuel and Rodríguez had to push it into the line. That was 12 days earlier. Authorities say drivers can only fill their tanks, but not other containers. For Rodríguez, that’s 60 liters (16 gallons), which he said will last him three days.

The recent fuel shortage largely affects diesel — used by heavy vehicles and classic cars whose original engines were long ago swapped out, often with Eastern European truck engines — rather than the gasoline used by most cars.

Rodriguez expressed frustration at the lack of clear explanations from officials.

“Nobody has said ‘this is what is happening’ with the fuel,‘” Rodríguez said. “If at some point there was information that, ´Look, there is no fuel because the situation of the country requires it to give electricity to people,’ I would understand.”

Experts — agreeing with scuttlebutt in the streets — say the country can’t afford to buy all the diesel it needs and what it has is being directed to generate power.

“What we are seeing is what we call the domino effect,” said Jorge Piñon, director of the Latin America and Caribbean Energy Program at the University of Texas in Austin.

“The collapse of the thermoelectric plants has caused an increased demand for diesel generation groups. Venezuela has not been sending Cuba the quantity of diesel it needs, so Cuba has had to take part of the supply that was dedicated to the transport sector for the diesel electric generation groups,” he said.

Half of Cuba’s electricity comes from 13 thermoelectric plants, eight of which are more than 30 years old. They usually depend on the island’s own heavy crude oil, but their operation has been erratic. So the island turns to diesel units to try to cover the shortfall.

Prior to the COVID-19 pandemic, Cuba used about 137.000 barrels a day of fuel — gasoline, diesel, natural gas and derivatives — to keep the economy moving. About half of that came from political ally Venezuela, which itself has sunk into economic crisis and, under mismanagement and U.S. embargoes, has found it increasingly difficult to produce and ship fuel .

International news media and tanker tracking sites reported that a Russian tanker carrying 700.000 barrels of oil reached Cuba in recent days, though authorities did not comment.

“We think it’s a shipment from Russia in place of Venezuela — that it is a triangulation where Russia is substituting for Venezuela with this shipment, later to be paid by Venezuela and not by Cuba,” Piñon said.

Meanwhile, Cubans are adapting as they can — whether at home or by heading abroad.

“I am going to keep struggling because I can’t stop working,” Pérez said at the station in Guanabacoa, east of central Havana. “but if there’s no (fuel), we will have to park it.”

At the station in Playa, the taxi driver Rodríguez said he was thinking of other options.

“My Plan B is to sell the car and leave the country with my family. I don’t know what I am going to do.”

Total blackout in Cuba after hurricane

Havana hotel death toll at 31 as survivors searched for