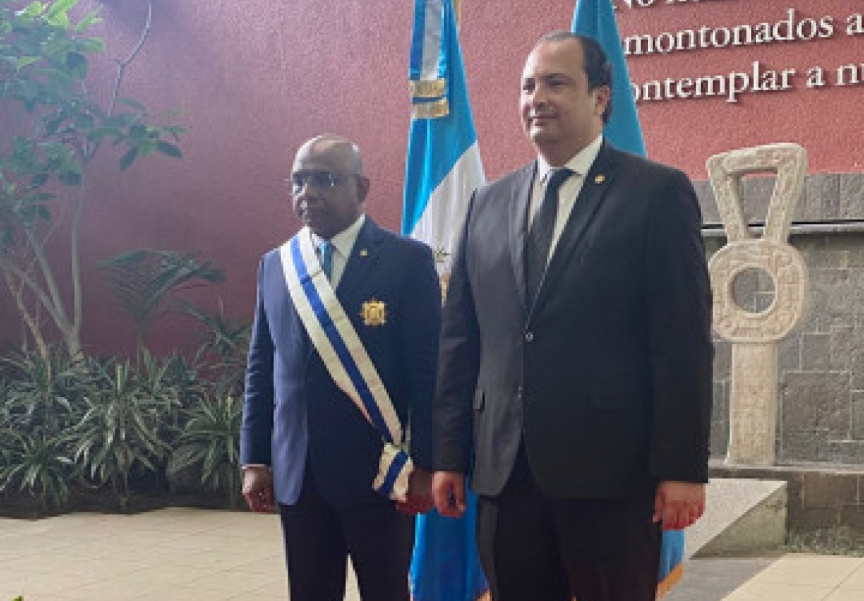 President of the 76th UNGA, Maldivian Foreign Minister Abdulla Shahid (L) is conferred the Grand Cross of the Order of Antonio Jose de Irisarri by the Guatemalan government. (Photo/Foreign Ministry)

President of the 76th session of the United Nations General Assembly (UNGA), Maldivian Foreign Minister Abdulla Shahid has been conferred the Grand Cross of the Order of Antonio Jose de Irisarri by the Guatemalan government.

Shahid was conferred the honor in a ceremony at the Guatemala City on Saturday.

Maldivian Foreign Ministry states Shahid was conferred the award in recognition of his work in foreign service, and his work as the President of the UNGA, including his efforts to promote sustainable development to overcome the COVID-19 pandemic, and efforts to protect human rights, promote gender equality, create opportunities for youth, and climate advocacy during his ‘Presidency of Hope’.

The Order of Antonio Jose de Irisarri was introduced by Guatemala in 1973 to honor statesmen.

The award was introduced in honor of celebrated Guatemalan statesman and writer Antonio Jose de Irisarri.

Shahid travelled to Guatemala on Wednesday. He has met with the Guatemalan president, government ministers, and other senior state officials during his visit.

He has also met with the heads of 23 different UN agencies operating in the country.