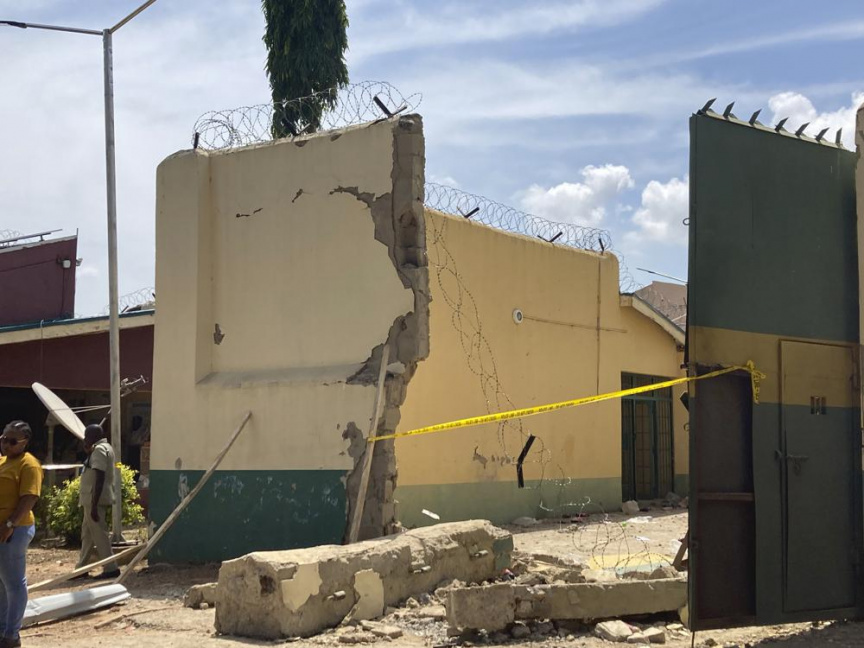 ABUJA, Nigeria (AP) — Nigerian authorities on Monday admitted shortcomings in security at a jail in the nation’s capital after an attack that resulted in the escape of hundreds of inmates last week.

The jailbreak in the Kuje area of Abuja led to the escape of 879 inmates, including 64 members of the Islamic State West Africa Province extremist group which claimed responsibility for the attack. The Islamic State-linked group is an offshoot of the Boko Haram militant group which has launched a decade-long insurgency in northeast Nigeria.

One of the escapees from Kuje prison was arrested on Monday, Nigeria’s National Drug Law Enforcement Agency said, but with at least 400 inmates still on the run, authorities are expanding the search to neighboring states.

Nigeria is synonymous with jailbreaks which have become more rampant in recent years but it was the first time during that period that Abuja is being targeted, leaving many shocked and in fear over how safe they are as the West African nation battles a cycle of violence blamed on Islamic extremists and on armed groups mostly in the country’s troubled north.

“Kuje (prison) is the most fortified in the country,” said Rauf Aregbesola, Nigeria’s interior minister. “We had enough men to protect the facility but unfortunately they couldn’t hold their position effectively for defense and that was the reason for the breach,” the minister said after visiting the attacked prison.

Even the Nigerian President Muhammadu Buhari could not provide answers to questions from citizens about how the attackers overwhelmed the security forces on duty and about how safe they are in the country of 206 million people. Buhari had more questions instead.

“How can terrorists organize, have weapons, attack a security installation and get away with it?” the Nigerian leader tweeted.

Incessant jailbreaks across Nigeria have seen more than 3,000 inmates freed since the start of 2021, media reports show. With the latest in the nation’s capital, the Nigerian Correctional Service has begun an appraisal to know “where we have challenges and how to nip it in the bud,” said Umar Abubakar, a spokesman for the agency, admitting also that the jailbreak was “a fallout of the security challenges” facing Nigeria.

For many Nigerians, Abuja used to be the “shock-absorber” where they run to for safety when other parts of Nigeria suffer attack, said Usman Ahmed, a taxi driver. But recent security incidents such as a train attack that killed seven nearby in late March and the Kuje jailbreak mean “nowhere to run to,” he said.

Authorities blamed the train attack and the jailbreak on extremist rebels that have waged an insurgency in northeast Nigeria for more than a decade. Those rebels are now expanding their reach beyond the northeast region to other parts of Nigeria including the northcentral region where Abuja is located, according to analysts.

“There are several terrorist cells already operating in northcentral, northwest and northeastern parts of Nigeria,” said Oluwaseyi Adetayo, a former officer of the Nigerian secret police Department of State Services now working as a security expert. “Many of them are already being activated.”

In the wake of the Kuje jailbreak, the Nigeria police said they have increased surveillance and security patrols in the nation’s capital but many are asking how long before another attack happens.

“If you want to encircle Abuja, you need to outline towns to support that kind of largescale operation, so currently all the states bordering Abuja are in turmoil,” said Confidence MacHarry with the Lagos-based SBM Intelligence firm.

In the Kuje area of Abuja, residents told The Associated Press that the increased security presence in the town does not make them feel safer.

“The residents in Abuja are afraid, not only in Kuje,” said Paschal Obi whose family of five has lived in the Kuje town for years. “Some (escapees) are still hanging around Abuja … they have not gone to their destinations. Personally, I am afraid and it is only God that can take control.”

Children among 31 killed at stampede in Nigeria

Monsoon rains kill 150 in less than a month in Pakistan