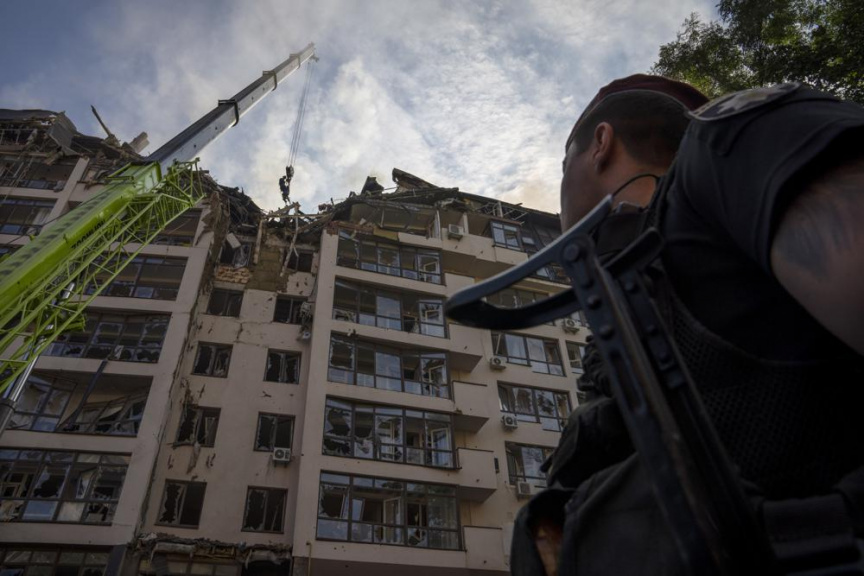 Servicemen work at the scene at a residential building following explosions, in Kyiv, Ukraine, Sunday, June 26, 2022. Several explosions rocked the west of the Ukrainian capital in the early hours of Sunday morning, with at least two residential buildings struck, according to Kyiv mayor Vitali Klitschko. (AP Photo/Nariman El-Mofty)

KYIV, Ukraine (AP) — Russia shattered weeks of relative calm in the Ukrainian capital with long-range missiles fired toward Kyiv early Sunday, an apparent Kremlin show-of-force as Western leaders meet in Europe to strengthen their military and economic support of Ukraine.

The strikes also damaged a nearby kindergarten, where a crater pocked the courtyard. U.S. President Joe Biden called the attacks “barbarism” after he arrived in Germany for a Group of Seven summit.

Later Sunday, a local official reported a second death, telling the Unian news agency that a railroad worker was killed and several others were injured in the attacks while servicing rail infrastructure.

Kyiv’s mayor told journalists he thought the airstrikes were “maybe a symbolic attack” ahead of a NATO summit in Madrid that starts Tuesday. A former commander of U.S. forces in Europe said the strikes also were a signal to the leaders of G-7 nations meeting Sunday in Germany.

“Russia is saying, ‘We can do this all day long. You guys are powerless to stop us,’” retired Lt. Gen. Ben Hodges, the former commanding general of U.S. Army forces in Europe, said. “The Russians are humiliating the leaders of the West.”

The G-7 leaders were set to announce the latest in a long series of international economic steps to pressure and isolate Russia over its war in Ukraine: new bans on imports of Russian gold. Standing with German Chancellor Olaf Scholz, the three-day meeting’s host, Biden said of the missile strikes on Kyiv: “It’s more of their barbarism.”

Zelenskyy, speaking in his nightly video address, appealed to the G-7 leaders for more help, saying stopping Russian aggression “is possible only if we get everything we ask for, and in the time we need it - weapons, financial support and sanctions against Russia.”

A Ukrainian parliament member, Oleksiy Goncharenko, wrote on the Telegram messaging app that preliminary information indicated that Russia launched 14 missiles toward the capital region and Kyiv itself. Zelenskyy said some were intercepted, and he vowed revenge against “all pilots, dispatchers, technicians and other people who ensure the launch of missiles in Ukraine.”

“We will find you all. Each of you will be responsible for these blows,” Zelenskyy vowed. “And if someone thinks he will evade responsibility by saying that this was an order, you are wrong. When your missiles hit homes, it’s a war crime. The court is what awaits you all. And you will not hide anywhere - neither on the shores of the Caspian Sea, over which your missiles are launched nor in Belarus ... Nowhere.”

In a phone interview, retired U.S. general Hodges told The Associated Press that Russia has a limited stock of precision missiles and “if they are using them, it’s going to be for a special purpose,”

Russia has denied targeting civilians during the 4-month-old war, and Hodges said it was hard to know if the missiles launched Sunday were intended to strike the apartment buildings.

Russian forces tried to seize control of Kyiv early in the war. After Ukrainian troops repelled them, the Kremlin largely shifted its focus to southern and eastern Ukraine.

In the east, Russian troops fought to consolidate their gains by battling to swallow up the last remaining Ukrainian stronghold in Luhansk province. Luhansk Gov. Serhiy Haidai said Sunday that Russia was conducting intense airstrikes on the city of Lysychansk, destroying its television tower and seriously damaging a road bridge.

“There’s very much destruction. Lysychansk is almost unrecognizable,” he wrote on Facebook.

For weeks, Lysychansk and the nearby city of Sievierodonetsk have been subject to a bloody and destructive offensive by Russian forces and their separatist allies aimed at capturing all of Ukraine’s eastern Donbas region.

They have made steady and slow progress, with Haidai confirming Saturday that Sievierodonetsk, including a chemical plant where hundreds of Ukrainian troops and civilians were holed up, had fallen.

Commenting on the battle for Sievierodonetsk, Russian Defense Ministry spokesman Igor Konashenkov said late Saturday that Russian and Moscow-backed separatist forces now control not only the city but the villages surrounding it. He said the Russian military had thwarted Ukrainian forces’ attempt to turn the Azot chemical plant into a “stubborn centre of resistance.”

Capturing Lysychansk would give Russian and separatist forces control of every major settlement in Luhansk. At the last report, they controlled about half of Donetsk, the second province in the Donbas.

On Saturday, Russia launched dozens of missiles on several areas across the country far from the heart of the eastern battles. Some of the missiles were fired from Russian long-range Tu-22 bombers deployed from Belarus for the first time, Ukraine’s air command said.

Reacting to the shelling from the Russian bombers, Zelenskyy appealed to the people of Belarus to resist cooperation with the Russian military. “The Russian leadership wants to draw you - all Belarusians - into the war, wants to sow hatred between us,” he said in his video address Sunday. “You can refuse to participate in this war. Your lives belong only to you, not to someone in the Kremlin.”

Belarus hosts Russian military units and was used as a staging ground before Russia invaded Ukraine, but its own troops have not crossed the border. In a meeting, Saturday, Russian President Vladimir Putin told Belarusian President Alexander Lukashenko that Russia planned to supply Belarus with the Iskander-M missile system.

On the economic front, U.S. Secretary of State Anthony Blinken said banning imports of Russian gold would represent a significant escalation of sanctions.

“That is the second-most lucrative export that Russia has after energy,” Blinken told American news channel CNN. “It’s about $19 billion a year. And most of that is within the G-7 countries. So cutting that off, denying access to about $19 billion of revenues a year, that’s significant.”

Russia is poised to default on its foreign debt for the first time since the 1917 Bolshevik Revolution, further alienating the country from the global financial system following international sanctions imposed over its war in Ukraine.

The country faces a Sunday night deadline to meet a 30-day grace period on interest payments originally due May 27. But it could take time to confirm a default.

Russia calls any default artificial because it has the money to pay its debts but says sanctions have frozen its foreign currency reserves held abroad.