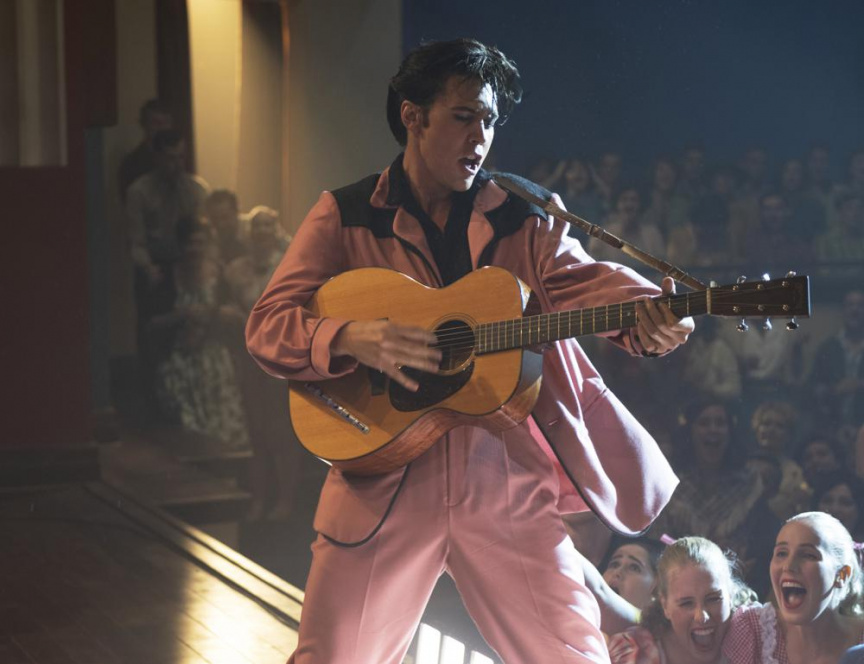 The brief life of Elvis Presley is not something that fits neatly into a conventional biopic formula, though many have tried. It was, perhaps, always going to take a director as wild and visionary as Baz Luhrmann to do something that evokes the essence of the King’s 42 years. Luhrmann knows better than to adapt a Wikipedia page when it comes to such a singular, larger-than-life star whose legend has only intensified and obscured almost a half a century after his death. Plus, he found a perfect star in Austin Butler, who fearlessly embodies the icon without ever slipping into impersonation.

With “ Elvis,” which arrives in theatres Friday, Luhrmann and Butler have created something gloriously messy — a maximalist opera of contradictions, styles, truths, myths, memories and headlines. It doesn’t explain, apologize or concern itself with logic. Dates and locations, when they’re conveyed at all, often fly by with little fanfare in montages of newspaper headlines or broadcasts. No one who doesn’t already know the facts of Elvis Presley’s life is going to ace any trivia round about him after this film. It sidesteps or completely disregards some seemingly significant things like the fact that he met Priscilla (given depth by Olivia DeJong) when he was 24 and she was 14. His entire Hollywood career is summed up in a quick montage that ends with Tom Hanks’ Colonel Tom Parker saying in voiceover that “we had a lot of fun.”

Perhaps it’s because there are other moments that Luhrmann and his team of screenwriters deem more important — Elvis’ early acts of rebellion in defiance of local politicians, the death of his mother, the assassinations of the Rev. Martin Luther King Jr., and John and Robert Kennedy, the 1968 leather-clad comeback special and the gilded cage of his Las Vegas residency, among them.

And still, this almost three-hour extravaganza that takes you from cradle to grave (and beyond) goes by in a fizzy, glittery, sweaty flash that does not leave you unsatisfied. It is propelled by Butler’s transcendent portrayal of Elvis from age 17 on, capturing his almost overnight ascent from a scrawny truck driver and occasional singer to being the most famous man in the world. Parker, Elvis’ controversial manager and promoter, may not have known much about music, but he saw what Elvis did to an audience with his proto-punk stylings, gyrating hips and blend of country and R&B and knew there was money to be made off this kid.

The story is actually first framed as the morphine memory of Parker, who is dying in an austere hospital room overlooking the gaudy Las Vegas strip two decades after Elvis had passed. Parker tells the audience that he is not the villain. This is surely his prerogative and probably something he believed to be true despite all the evidence to the contrary that this carnival huckster ultimately broke his fragile star (or at least set him on a path to inevitable ruin). And yet the fact that even under mountains of prosthetics and a strange accent that it is still Tom Hanks with his endlessly empathetic eyes may have you second-guessing yourself, or understanding why Elvis might have second-guessed himself. The artifice of his performance fits in the context of Luhrmann’s theatrical storytelling.

Though the film is flimsy with biographical facts, it does make sure to put Elvis’s Mississippi and Beale Street influences front and centre. We see him soak up everything from the sensuality of the juke joints and the rapture in the Pentecostal revival tents he saw as a child to the work of Black artists like B.B. King (Kelvin Harrison Jr.), Big Mama Thornton (Shonka Dukureh), Sister Rosetta Tharpe (Yola), Little Richard (Alton Mason) and Arthur “Big Boy” Crudup (Gary Clark Jr.) he’d see later.

It’s all presented without commentary, judgment or much introspection. Is it a cop-out? A choice? Is it daring the audience to make their own conclusions? Whatever it is, it’s at least consistent with a movie where “Dr Nick” and his pills seem to just appear out of the blue. And, again, “Elvis” seems to be more about getting you on a gut, emotional level than inundating you with facts and complexities around race and business in mid-century America.

Luhrmann never does anything by half measures, but perhaps one of the most striking things about “Elvis” is how ultimately restrained it is in the end. This could have been a wall-to-wall Can-Can fever dream, full of rhinestones and dizzying camera movements. There is some of that, certainly. But Luhrmann and his collaborators reserve most of that chaotic energy for the stage, and more specifically Elvis’s person. It is as though the wildness of all of Luhrmann’s films is bursting out of Butler’s Elvis, through his hip thrusts and sweat and that booming, beautiful voice.

CW’s ‘The Winchesters’ is a ‘Supernatural’ origin story