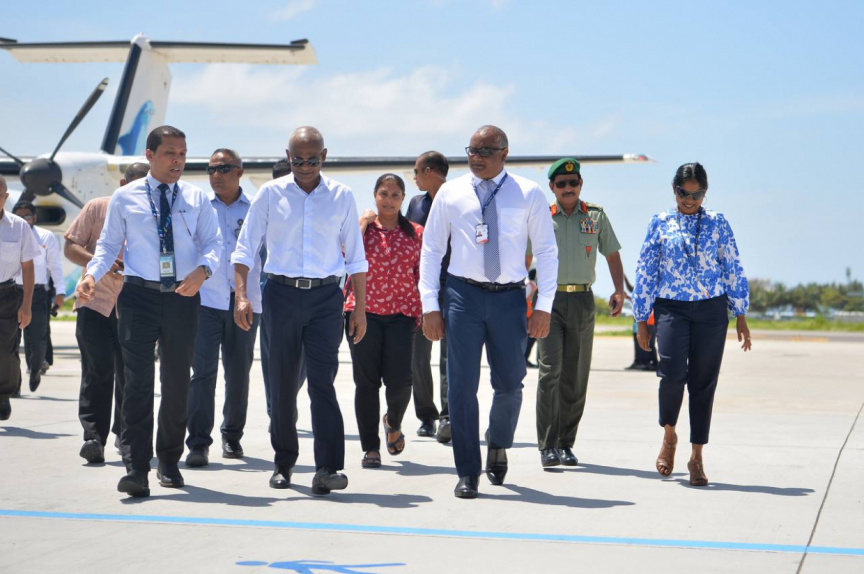 President Ibrahim Mohamed Solih, on Sunday, has concluded the two-day official visit to Sh. Funadhoo and N. Holhudhoo – arriving back in Male’ City.

The trip was undertaken by President Solih to officiate ceremonies held to mark the golden jubilee celebrations of Funadhoo School and the diamond jubilee festivities of Holhudhoo’s Meyna School.

Speaking at the ceremony held on Friday evening to mark the golden jubilee of Funadhoo School – President Solih said that Funadhoo School’s most prominent achievement was the human resources it helped develop over its 50-year-long history.

“Scores of individuals who graduated from Funadhoo School are currently serving in senior positions in various institutions in this island and this region,” he stressed.

Speaking at Meyna School’s diamond jubilee event on Saturday night – President Solih said that during the school's over 75-year-long history, it has produced a large number of productive citizens, and also underscored the school’s numerous contributions to the history of the country’s education system.

During his trip, President Solih also met with the local council and Women’s Development Committee of both the islands to discuss developmental plans and pertinent issues.

Accompanied by a high-level delegation – President Solih concluded the trip and returned to Male’ City this afternoon.