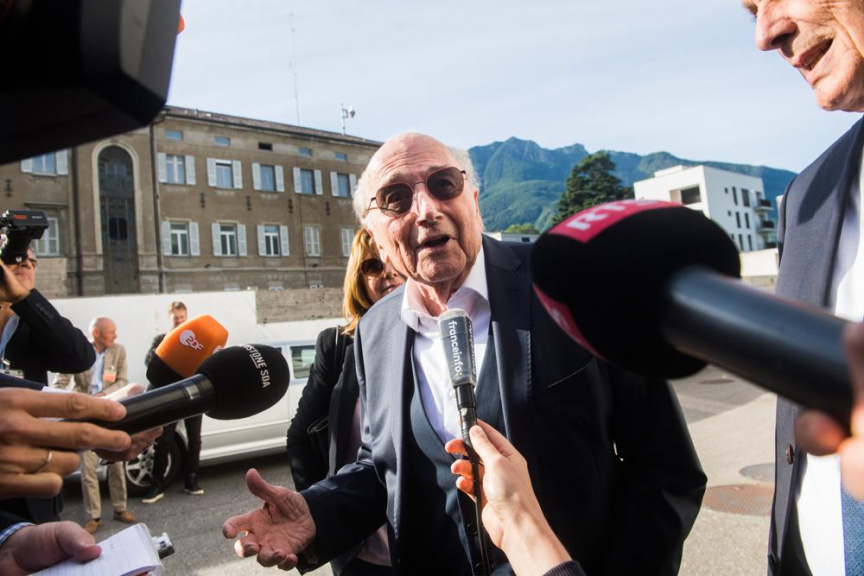 The former president of the World Football Association (FIFA), Joseph Blatter, speaks as he arrives at the Swiss Federal Criminal Court in Bellinzona, Switzerland, Wednesday, June 8, 2022. (Alessandro Crinari/Keystone via AP)

Blatter and Platini, a former France national team captain who was president of European governing body UEFA, faced sentences of up to five years for financial wrongdoing but actual jail time was considered to be unlikely ahead of their 11-day trial. Verdicts are expected on July 8.

The 86-year-old Blatter’s legal jeopardy increased Wednesday when prosecutors in FIFA’s home city Zurich confirmed to The Associated Press they had opened criminal proceedings against him in a separate complaint filed by soccer’s world body in 2020.

Blatter and Platini deny fraud and lesser charges relating to a FIFA-approved $2 million payment to the France great in 2011. At the time, Platini was UEFA president, a FIFA vice president and was expected to succeed Blatter, likely in 2015.

Platini said in a statement published after the court session that he was “serene and confident.”

“The indictment of the prosecutor today is devoid of any basis,” Platini said. “The debates of the trial proved that this criminal procedure had no reason to exist.”

The prosecution argued there was no legal or contractual basis for FIFA to pay Platini’s invoice for working as a presidential adviser in Blatter’s first term between 1998 and 2002. FIFA also paid $229,000 of social security taxes in Zurich.

Both have long denied wrongdoing and claim they had a verbal deal in 1998 for Platini to get extra salary that FIFA could not pay at the time. Platini signed a contract in August 1999 to be paid 300,000 Swiss francs ($300,000) annually.

Their defense previously failed at the FIFA ethics committee, which banned them from soccer and removed them from office, the FIFA appeals committee, and later in separate appeals at the Court of Arbitration for Sport.

Blatter has said FIFA accounted for the money properly, and Platini has claimed the allegation came to light in September 2015 to block him from campaigning to be FIFA president.

In June 2015, Blatter announced his plan to resign early as president in fallout from a sprawling American corruption investigation. A separate but cooperating case by Swiss prosecutors led to the Platini payment being investigated.

Blatter and Platini testified last week and both are expected to make closing statements at the end of the trial on June 22.

Two federal criminal proceedings and one at canton (state) level are now ongoing against Blatter and also Valcke.

FIFA asked Zurich prosecutors to look at the $140 million renovation of a downtown Zurich building for a museum long seen as a pet project of Blatter that opened in 2016. The loss-making museum is tied to a longterm FIFA rental of apartments and offices on the site owned by insurance firm Swiss Life.

Lawyers for Blatter said 18 months ago the museum allegations are “baseless and are vehemently denied.”

Federal prosecutors including Hildbrand are also investigating a FIFA loan of $1 million in 2010 to the Trinidad and Tobago soccer federation. The suspects are Blatter, Valcke and former FIFA finance director Markus Kattner, who testified in court Tuesday about the Platini payment.

The loan was later waived and effectively gifted soccer money to Jack Warner, then a FIFA vice president, weeks before he was a candidate in the Caribbean islands’ general election. Warner then became a government minister.

Valcke is also awaiting a federal appeals court verdict in Bellinzona after a retrial in March on charges linked to use of a Qatari-owned villa in Sardinia and World Cup broadcast rights. The three defendants include soccer and broadcast executive Nasser al-Khelaïfi, the president of French champion Paris Saint-Germain.