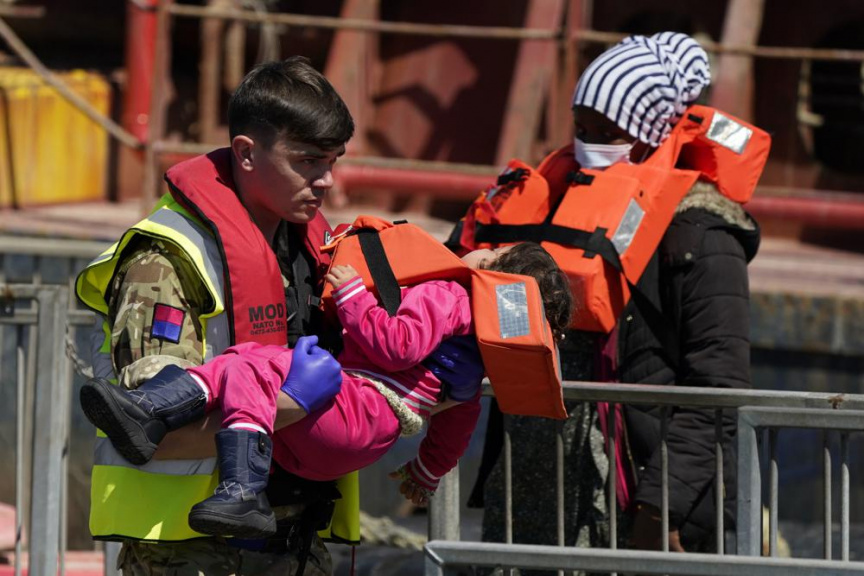 A soldier carries a child from a group of people thought to be migrants are brought in to Dover, England, by Border Force, following a small boat incident in the Channel, Tuesday June 14, 2022. (Andrew Matthews/PA via AP)

LONDON (AP) — Britain canceled a flight that was scheduled to deport asylum seekers to Rwanda late Tuesday after the European Court of Human Rights intervened, saying the plan carried “a real risk of irreversible harm.”

The decision to scrap the flight capped three days of frantic court challenges from immigrant rights lawyers who launched a flurry of case-by-case appeals seeking to block the deportation of everyone on the government’s list.

British government officials had said earlier in the day that the plane would take off no matter how many people were on board. But after the appeals, no one remained. British media reported that the number of potential deportees had been more than 30 on Friday.

After the flight was canceled, Home Secretary Priti Patel said she was disappointed but would not be “deterred from doing the right thing.” She added: “Our legal team are reviewing every decision made on this flight and preparation for the next flight begins now.”

Prime Minister Boris Johnson had emphatically defended Britain’s plan, arguing that it is a legitimate way to protect lives and thwart the criminal gangs that smuggle migrants across the English Channel in small boats. Britain in recent years has seen an illegal influx of migrants from such places as Syria, Afghanistan, Iran, Sudan, Iraq and Yemen.

Johnson announced an agreement with Rwanda in April in which people who enter Britain illegally will be deported to the East African country. In exchange for accepting them, Rwanda will receive millions of pounds (dollars) in development aid. The deportees will be allowed to apply for asylum in Rwanda, not Britain.

Opponents have argued that it is illegal and inhumane to send people thousands of miles to a country they don’t want to live in. The leaders of the Church of England joined the opposition, calling the government’s policy “immoral.” Prince Charles was among those opposed, according to British news reports.

Activists have denounced the policy as an attack on the rights of refugees that most countries have recognized since the end of World War II.

Refugee Council chief executive Enver Solomon said the British government’s deportation threat would not serve as a deterrent to those seeking safety in the U.K.

“The government must immediately rethink by having a grown-up conversation with France and the (European Union) about sharing responsibility and look to operating an orderly, humane, and fair asylum system,” Solomon said.

The U.N. refugee agency condemned the plan out of concern that other countries will follow suit as war, repression and natural disasters force a growing number of people from their homes.

Politicians in Denmark and Austria are considering similar proposals. Australia has operated an asylum-processing center in the Pacific island nation of Nauru since 2012.

“At a global level, this unapologetically punitive deal further condones the evisceration of the right to seek asylum in wealthy countries,” said Maurizio Albahari, a migration expert at the University of Notre Dame in Indiana as he described the UK policy.

Many millions of people around the globe have been displaced over the past two decades, putting the international consensus on refugees under strain. The world had more than 26 million refugees in the middle of last year, more that double the number two decades ago, according to the U.N. refugee agency. Millions more have left their homes voluntarily, seeking economic opportunities in developed nations.

In Britain, those pressures have led to a surge in the number of people crossing the English Channel in leaky inflatable boats, sometimes with disastrous consequences. Last November, 27 people died when their boat sank in the waters between France and England.

Johnson, fighting for his political life amid concerns about his leadership and ethics, responded by promising to stop such risky journeys.

While Rwanda was the site of a genocide that killed hundreds of thousands of people in 1994, the country has built a reputation for stability and economic progress since then, the British government argues. Critics say that stability comes at the cost of political repression.

Filippo Grandi, the U.N. high commissioner for refugees, attacked the policy as “all wrong.”

If the British government is truly interested in protecting lives, it should work with other countries to target the smugglers and provide safe routes for asylum-seekers, not simply shunt migrants to other countries, Grandi said.

“The precedent that this creates is catastrophic for a concept that needs to be shared, like asylum,” Grandi said Monday.

The Archbishop of Canterbury and 24 other bishops from the Church of England joined the chorus of voices asking the government to reconsider an “immoral policy that shames Britain.”

“Our Christian heritage should inspire us to treat asylum-seekers with compassion, fairness and justice, as we have for centuries,” the bishops wrote in a letter to the Times of London.

Many migrants favor Britain as a destination for reasons of language or family ties, or because it is seen as an open economy with more opportunities than other European nations.

When Britain was a member of the European Union, it was part of a system that required refugees to seek asylum in the first safe country they entered. Those who reached Britain could be sent back to the EU countries they traveled from. Britain lost that option when it withdrew from the EU two years ago.

Since then, the British and French governments have worked to stop the journeys, with a great deal of bickering and not much success. More than 28,000 migrants entered Britain in small boats last year, up from 8,500 in 2020.

Nando Sigona, a migration expert at the University of Birmingham, said large principles are at stake if the Rwanda policy stands.

“How can we establish any kind of moral high ground where we intervene in other countries if we are not signatory to providing protection to those fleeing war and persecution?” Sigona asked.

UK readies for travel disruptions as temps may hit 40°C