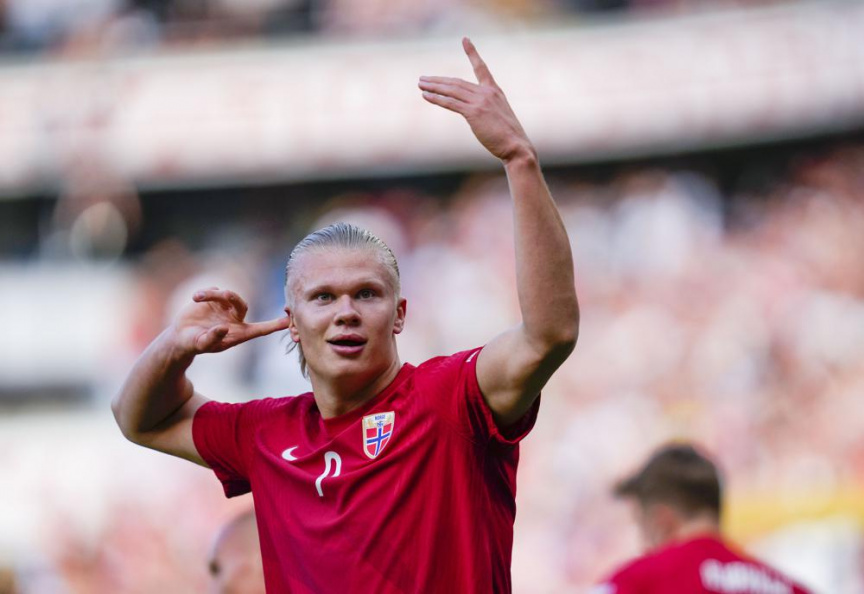 The Norway striker finalized his move to Manchester City from Borussia Dortmund for 60 million euros ($63 million) on Monday to seal his return to England, the country of his birth.

His father, Alf-Inge, played for and briefly captained City in the Premier League from 2000-03 and Erling supported the team as a kid, often going to Maine Road — the club’s former home — with his mother to watch his father play. He has posted on social media pictures of himself wearing a City jersey as a young boy.

Haaland said his family connections were among the reasons why he is joining City despite interest from many other major clubs in Europe.

“First of all, my father, a little bit,” he said. “I was born in England. I have been a City fan my whole life. I know a lot about the club.

“In the end, (there were) two things. I feel at home here and I feel I can develop and get the best out of my game at City. I like the style (of play). I like the attacking football. I like the positive vibe we have when City play football. This is what I like a lot, so I think it’s a good fit.”

Haaland, regarded as one of the world’s top young players along with Kylian Mbappe, is joining on a five-year deal. City activated the release clause in Haaland’s Dortmund contract and looks to be getting a superstar on the cheap.

“We have been monitoring Erling for several years now, so we are delighted to bring him here to Manchester City,” said Txiki Begiristain, the club’s director of football.

“He is a huge talent and has been one of the best strikers in Europe over the last few seasons. His goalscoring record is exceptional and his performances at Borussia Dortmund and in the Champions League in particular have proved he can succeed at the highest level. Erling has everything we want in a striker, and we are certain he will excel in this squad and this system.”

“The first time a young superstar, sought by all, has come to an English club over the Spanish giants,” Lineker said on Twitter.

Haaland has scored 20 goals in 21 appearances for Norway and netted 86 goals in 89 games in two and a half seasons with Dortmund. Before that, he was at Molde in Norway and then Salzburg in Austria, where he initially grabbed the attention of Europe’s major clubs thanks to his performances in the Champions League.

It’s that competition which has proved elusive for City despite its heavy spending on players under its Abu Dhabi ownership since 2008.

Haaland’s arrival should improve City’s chances of becoming European champion — the ring tone of his cell phone is the Champions League anthem — and of retaining the Premier League title.

“There are so many world-class players in this squad and Pep is one of the greatest managers of all time, so I believe I am in the right place to fulfil my ambitions,” Haaland said.

“I want to score goals, win trophies, and improve as a footballer and I am confident I can do that here. This is a great move for me, and I can’t wait to get started in pre-season.”

Haaland moving to City after $63M deal with Dortmund