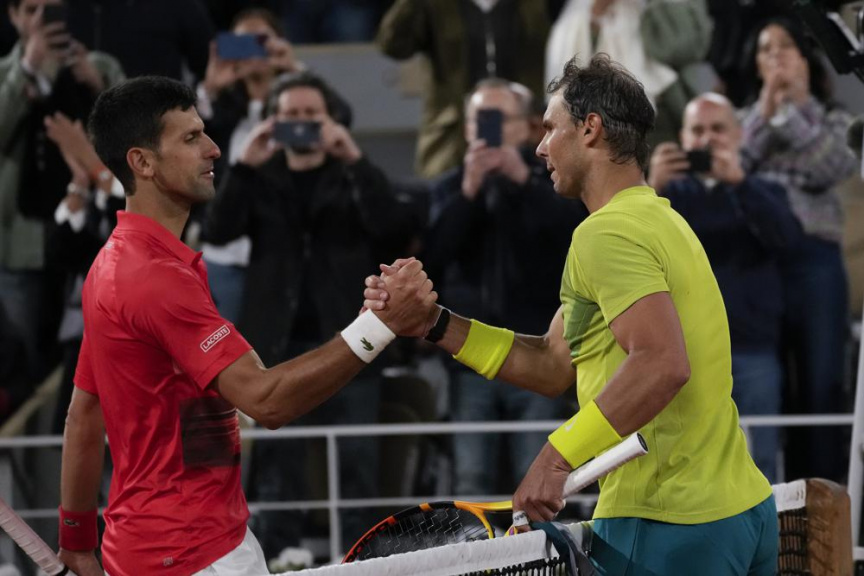 PARIS (AP) — Rafael Nadal insists he can’t know for sure whether any match at Roland Garros might be his very last at a place he loves, a place he is loved.

For now, if he keeps winning and keeps performing the way he did during his monumental quarterfinal victory over longtime rival Novak Djokovic, Nadal will have more chances to play.

With a mix of brilliant shot-making and his trademark resilience, Nadal got past the top-seeded defending French Open champion Djokovic 6-2, 4-6, 6-2, 7-6 (4) to move a step closer to his 14th championship at the clay-court Grand Slam tournament and what would be a 22nd major trophy overall, adding to records that he already owns.

“To win against Novak, there is only one way — to play at your best from the first point to the last,” Nadal said. “Tonight has been one of those magic nights for me.”

For anyone lucky enough to be there, too, or even anyone watching from afar.

The match began a little past 9 p.m. Tuesday and concluded more than four hours later, after 1 a.m. Wednesday.

Nary a game, a point, a stroke or, indeed, a step came with a hint of insouciance. Both men gave their all. Nothing came easily.

The bracket said this was a quarterfinal, yes, but it felt like a final, from the quality of play to the quality of effort, from the anticipation that preceded it to the atmosphere that enveloped it.

The only missing ingredient: There was no trophy handed to the winner.

Nadal’s 3-0 lead in the second set did him no good; Djokovic ended up taking it.

Djokovic’s 3-0 lead in the fourth did him no good, even though he served for it at 5-3, even standing one point from forcing a fifth twice. Nadal saved those set points and broke there, then ran away with the closing tiebreaker, seizing a 6-1 edge and and never losing focus after his first three match points went awry.

“Always playing against him is an amazing challenge,” Nadal said. “All the history we have together, today was another one.

This showdown was the 59th of their careers, more than any other two men have played each other in the Open era. Nadal narrowed Djokovic’s series lead to 30-29 while improving to 8-2 against his rival at Roland Garros.

Nadal is now 110-3 for his career at the place. Two of those losses came against Djokovic, including in last year’s semifinals. This time, Nadal made sure Djokovic remains behind him in the Slam count with 20. Nadal broke their three-way time at that number with Roger Federer by capturing the Australian Open in January, when Djokovic was not able to play because he is not vaccinated against COVID-19.

Nadal turns 36 on Friday, when he will face third-seeded Alexander Zverev in the semifinals.

When the subject of Nadal’s future was brought up during his on-court interview, he smiled.

“Not really getting easier from here,” Zverev said after putting an end to Alcaraz’s 14-match winning streak.

“I told him at the net, ‘You’re going to win this tournament a lot of times, not just once,’” said Zverev, the runner-up at the U.S. Open in 2020 and the gold medalist at the Tokyo Olympics last summer. “I hope I can win it before he starts ... beating us all.”

But the nightcap was saved for two players who know each other so well. The tendencies and tactics. The mannerisms and moods.

So it should come as no surprise they engaged in points so involved, so lengthy — 57 of at least nine strokes, with one that went 25 — that before some were concluded, folks in the stands would let out a gasp or an “Aaaah!” or “Awwww!”, drawing rebuking hisses of “Shhhhh!” in response.

Ten minutes were required to decide merely the initial game, in which Nadal broke serve, and 49 minutes for the opening set, the final game of which was delayed slightly as fans rose from their seats to do the wave — then applauded themselves for the effort.

That was the first set Djokovic had lost over the past two weeks and closed a streak of 22 consecutive sets dating to his title run at the Italian Open in early May.

As time passed and the air became colder — below 60 degrees Fahrenheit (15 Celsius) — Nadal and Djokovic embodied the words in clay-colored capital letters in French and English along the facing of the lower level of the arena, attributed to Roland Garros, the World War I fighter pilot for whom the facility is named: “Victory belongs to the most tenacious.”

In the early going, and down the stretch, it was Nadal getting the better of the baseline back-and-forths, pushing and pulling Djokovic this way or that, up and back, until an opening for a clean winner presented itself.

Djokovic reacted to his own miscues by rolling his eyes, shaking his head or putting his palms out as if to say, “What’s going on?”

Nadal showed zero signs of being slowed or bothered one bit by the chronic pain in his left foot that flares up every so often and kept him off the tour for the last half of 2021 and arose again before the French Open.

Nor did Nadal betray a trace of fatigue from his five-set tussle against No. 9 seed Felix Auger-Aliassime in the fourth round on Sunday that lasted 4 hours, 21 minutes, nearly twice as long as Djokovic’s matter-of-fact win that day.

Malik Tillman approved for switch to US from Germany