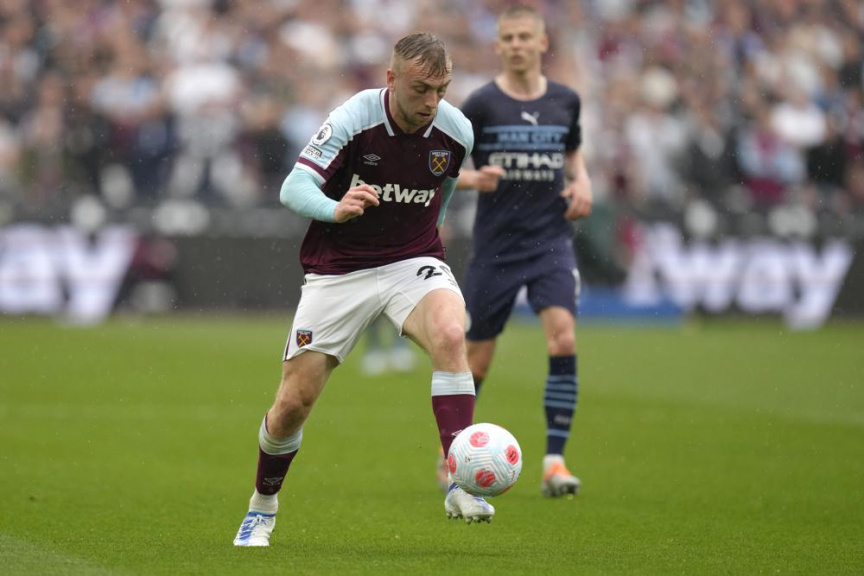 LONDON (AP) — Jarrod Bowen was rewarded for his breakthrough season at West Ham by earning his first call-up to the England squad ahead of four Nations League games next month.

Bowen, who scored 12 goals and had 10 assists in the Premier League, was joined in England’s 27-man squad by Leicester fullback James Justin.

Manchester United’s slump as a Premier League force was symbolized by the team having only one representative in the squad — Harry Maguire — with the likes of Marcus Rashford, Jadon Sancho and Luke Shaw all overlooked.

From June 4-11, England plays Hungary twice as well as Italy and Germany in their Nations League group. Group play concludes in September.

It marked the next-to-last squad announcement by England coach Gareth Southgate before he announces his group to take to the World Cup in Qatar over November and December.

Bowen is making a late run for the World Cup after starring for West Ham on the right-wing this season, with his total number of goal contributions — 22 — only beaten by four players in the Premier League: Mohamed Salah, Son Heung-min, Harry Kane and Kevin De Bruyne.

With no specialist left-back called up by Southgate, Justin got the call for his versatility — he can play on both the left and the right — and will likely compete with Kieran Trippier for a starting spot.

Justin returned to competitive action in January after a year out because of a right anterior cruciate ligament injury.

Center back Fikayo Tomori is back in the squad after helping AC Milan win the Italian league in his first full season in Serie A.

Tammy Abraham, who also plays in Italy with Roma, was selected as the back-up to captain Harry Kane as centre forward ahead of Dominic Calvert-Lewin, who has missed the majority of the season with Everton because of injury.

Sancho and Rashford paid the price for a poor season by United, which finished sixth with 58 points — its lowest total since the Premier League was created in 1992. Maguire kept his place in the squad, as one of five centre backs, despite being dropped by United for some games toward the end of the campaign.

Sancho missed the final games of the season because of illness.

The England-Italy match is a repeat of last year’s European Championship final but will be played in an empty stadium as punishment for crowd trouble that marred the title match at Wembley Stadium in July.